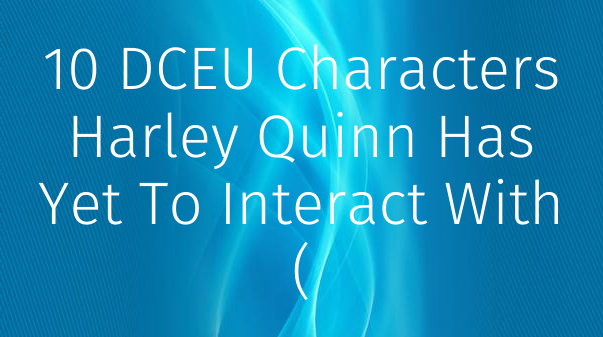 With three movies under her belt and a huge fanbase, Harley Quinn has definitely earned her place as the 'fourth pillar' in the DCEU - despite having not interacted with many of the other main characters. She's met more than most, courtesy of working with multiple incarnations of Task Force X in Suicide Squad and The Suicide Squad, and has created her own female-led team in Birds of Prey, but the only Justice Leaguer that she's gone up against so far has been Batman.

Of course, it's possible that she's tangled with other characters off-screen, especially as her on-screen story jumps around the timeline a little bit. Assuming that she'll be around for a while longer (and not die in Batman's arms, as she does in the Snyder Cut), she'll presumably end up connecting with the rest of the heroes and villains in this cinematic universe - but how are those big meetings likely to turn out?

The two female leads of the DCEU have yet to meet, but this would be an epic team-up if it does come to the big screen. In the comics, Harley and Wonder Woman have, in fact, teamed up before - to save Harley from hitmen, in a storyline last year. And despite the seeming incongruity of their personalities and ways of dealing with conflict, it was a surprisingly successful interaction. Harley is also a huge fan of Diana, in this arc, and it would be amazing to see her fangirl on the big screen. Diana, too, might appreciate Harley's history, as well as her Birds of Prey. Given that both are canonically LGBTQ+ in the DCEU, too, this could be an incredible moment for romance.

Harley Quinn has tangled with Aquaman recently in her animated series, but the two have yet to cross paths on the big screen - and they would probably have a lot of fun together. Jason Momoa's Aquaman is a bit of a 'bro', and it's easy to see how he and Harley would have a great time causing chaos. However, his brooding side would probably find Harley incredibly annoying to deal with - initially, this was a man that found Batman an annoyance.

In Birds of Prey, Harley showed that she was surprisingly good with kids, given how she takes Cass under her wing (in her own way). Given her history there, she might be a surprisingly good friend to Billy Batson, and would definitely have the same childlike joy in his new abilities (as she is one of the few DCEU characters who seems to really have fun as a super). Of course, Billy would likely be pretty intimidated by her, and unsure about her as a villain, but this would still be a fascinating interaction - and perhaps Billy and Cass would be the two to really connect.

It's not clear if Lex Luthor will be returning to the DCEU any time soon - it looks like Cavill's future as Superman is up in the air, with no current plans to bring him back to the big screen. Given that the current, Jesse Eisenberg Lex was controversial and generally disliked, without Cavill's Superman, there seems little reason for him to return.

If he did, however, it would be a great way to show him pursuing Harley to work for him - and her turning him down. In the recent comic event Year Of the Villain, this exact scenario happened, and Harley tried everything to shake him.

The Flash is a unique character thanks to the way his powers allow him to travel across time and the multiverse (and he's already met another version of himself) - something that gives him the kind of meta-awareness that Harley is known for. In the comics, Harley not only breaks the fourth wall on a regular basis, but is good friends with Jonni, the Continuity Cop. While there's little doubt that the DCEU Barry would be completely intimidated by Harley, seeing them develop a connection over a meta-awareness would be incredibly interesting (if potentially too complicated to really pay off).

Poison Ivy is yet to hit the DCEU as a love interest for Harley Quinn, but until she shows up, it might be fun to see Harley have a fling with Mera, instead! Of course, there are some fairly big roadblocks to this, starting with Mera's potential relationship with Aquaman, and ending with Mera's reticence to leave Atlantis very often. Still, Harley visiting Atlantis (which she has done, in the Suicide Squad comics) could be a particularly unique story to see play out.

Harley and Cyborg are unlikely to get along, but that doesn't mean that a meeting wouldn't be interesting to watch. The most likely scenario, of course, is if Harley were to meet up with (or go up against) the current Justice League.

Fans are certainly hopeful that this may happen in the future, as it would bring together some of the biggest and most popular characters. However, should the two meet, they would most likely hate each other - they are just too different.

Of all the potential DCEU characters Harley could meet, Cheetah is one of the least likely - but it would still be incredible to see happen. At the end of Wonder Woman 1984, Barbara is alive and alone, and her eventual fate is unknown, but as her place in the future DCEU hasn't been confirmed (as happening or off the table), she may come back into play in the future. Should Harley and Barbara meet, they would likely connect over a few things - strong women, villainous pasts, not seeing themselves as true villains... and Barbara may well start to look up to Harley. That said, Cheetah would be significantly older than Harley, too, which would put a different spin on things.

Given that the story of Cavill's Superman is likely wrapped up in the DCEU, his mothers' story will be too... but it would still be interesting to see Harley and Ma Kent get together. Fans of the comics know that Harley's relationship with her own mother (thankfully, not named Martha) is an incredibly close and loving one, and seeing her connect to another mother figure would add some real depth to the character. While Harley is an incredible part of the DCEU, there's so much to her that has yet to be seen, and this would be a wonderful place to start.

Harley and Batman have a complicated history - and one that isn't particularly friendly, as it was revealed that Harley was involved in the death of Robin. Batman has met Harley in the DCEU (and arrested her), but Alfred hasn't had the pleasure. It would be interesting to see how he reacts, given her history, but also her slow shift into anti-hero with the Suicide Squad, and since her break with Joker. Given that Joker was the driving force in the death of Robin, there may be some space for Harley to show just how much she has changed since that time - and for fans to learn a little more about what happened.

NextHarry Potter: 10 Quotes That Prove Harry Was The Funniest Character
About The Author

Rose Graceling-Moore has been writing about film, TV and comics since 2013, when she began writing for a local print magazine in Vancouver, BC. Since then, Rose has written for Horror Honeys, Moviepilot and Quirkbooks as well as Screenrant, increasingly focusing on comic books and live-action comic adaptations, as well as diversity and representation on screen. Rose also co-hosted the DC Movies Podcast, and has guested on other nerd and entertainment podcasts over the past five years.

Rose’s love of comics began all the way back in the early ‘90s, when she discovered the X-Men while living in Africa (where there wasn’t a whole lot to do but read!), and since then has had an on-again, off-again love affair with not just Marvel, but DC and indie comics as well. You can follow her on Twitter: RoseMooreWrites for tweets about comics, movies, and more.