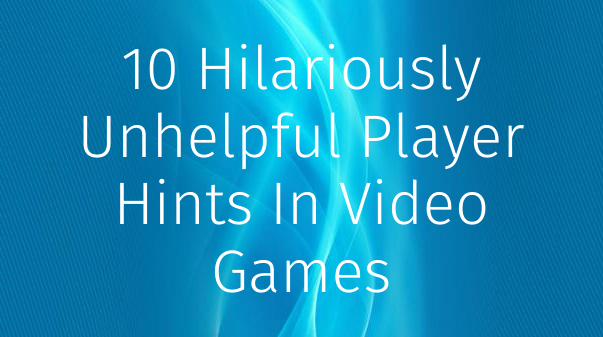 A good hint in a video game can be a big help for players. Whether they provide an important clue to solve a puzzle or offer advice on how to progress through a difficult fight, a helpful tip can make the difference between a player getting stuck and progressing.

Sometimes though, these hints are a little less than helpful. Everyone has experienced a game that gives too much information or not enough, but some information is the exact opposite of helpful. Whether they were hilariously obvious or intentionally vague, these hints probably didn't prove to be much use to players.

While most people have likely never had to deal with a grenade in person, it is a solid bet that many of them would know what not to do around one. It is also a safe bet that letting one anywhere near their head would probably be very high on that list.

In Batman: Arkham Origins criminally underrated multiplayer mode, however, this is exactly what the game feels the need to remind you of. Granted it is not always a player's choice where an enemy grenade ends up, but most probably could have guessed that taking one to the head would spell bad news.

"Sometimes when you get shot, you'll suffer a gunshot wound"

A very large portion of video games, especially action games, involve some kind of gunplay. This being said, most fans of these games are likely aware that a gunshot wound is a fairly common occurrence when a player character is struck by an enemy bullet, especially by the third game in a series.

This specific hint is somewhat helpful, as gunshot wounds in Snake Eater are specific injuries that must be healed with certain resources, but that doesn't make the initial tip any less hilarious when it is read for the first time.

One of the recurring enemies in the phenomenal Mad Max game are Top Dogs, boss characters who guard the toughest enemy camps in the game. Each Top Dog has their weakness that can be exploited for extra damage, which can be discovered by talking to wastelanders.

What is funny about these weaknesses is that all of them are things every living person is weak to. One boss's weakness is being set on fire, one's is being stabbed, and one's is being blown away with a shotgun. All of these attacks do significantly more damage to their respective bosses, but when one's advice is literally "Try blowing him up", it veers almost into parody.

LEGO games have always had a good sense of humor about them, and none of them are particularly meant to be taken seriously. One hilarious example occurs in this hint from LEGO Batman. One recurring obstacle in the series is toxic waste, noticeable by its green, bubbly appearance.

The toxic waste is only passable by certain characters who are immune or while wearing special suits, a fact the game informs players of with this hilariously obvious tip. While some younger players may not know about toxic waste at first glance, it is usually a good idea to never walk into any glowing piles of goo anywhere.

"You need to breathe to stay alive"

Once again, this hint is necessary because air levels are a key mechanic in Ecco The Dolphin, but this simple phrase is still amusing enough to get a laugh out of many players. Playing as the titular dolphin, Ecco forces players to come up for air while traversing its underwater levels. Failing to get air in time will of course result in a game over screen.

Since most games don't require mandatory breathing, it was important for the game to state this fact to players, but it still results in one of the funniest out-of-context hints of all time.

"The floor here will kill you, try to avoid it"

Portal's GlaDOS is one of the funniest and best villains in gaming, and her deadpan delivery of banter to the player is perfect evidence of this. Throughout the game, GlaDOS will mock the player, mislead them, or intentionally give them awful advice to hamper them as they solve the numerous puzzles.

There are too many great lines to choose from, but one of the funniest of these occurs when players reach a test chamber where the floor has been booby-trapped. After informing players that she is programmed to give helpful advice, GlaDOS simply tells players not to touch the floor. If only it were that easy.

Assassin's Creed Odyssey may contain the single most obvious piece of advice from any game ever. The series has always encouraged players to experiment with different play styles to figure out how to beat the game's hardest battles, but this hint outshined any other gameplay tip.

Everyone who has played a game with a health bar knows that it reaching zero means death, so reminding players to not let that happen while making it happen to their enemies is most likely something players had already at least considered. The hint is meant to be tongue in cheek and shows that the franchise may have a better sense of humor than many give it credit for.

"Defenseless herbivores are no match for guided missiles"

The Mass Effect series gives players a massive amount of player choice through its story, allowing players to play as a virtuous paragon or an antiheroic renegade. One seemingly inconsequential option that players had in the second game involved some innocent animals and high explosives.

While exploring a planet in their Hammerhead vehicle, players can come upon herds of peaceful animals. If they decide to test the Hammerhead's weapons on these animals, they will be greeted with this absolute gem of an analysis. Needless to say, the guided missiles win.

"Why am I collecting these?" "Because, Spongebob"

Spongebob: Battle For Bikini Bottom was a surprisingly great game that featured many returning voice actors, references to several of the show's best running gags, and the trademark humor that made the show popular.

The game is very willing to poke fun at itself and games as a whole, especially when it comes to why players are collecting the game's numerous collectibles. Upon asking Bubble Buddy why he is collecting all these golden spatulas, Spongebob is met with the hilariously simple reply of "Because", and that is the end of the conversation. Mrs. Puff even gives Patrick a similarly hilarious response earlier with the ominous "Don't ask questions you aren't prepared to hear the answers to."

"To defeat the Cyberdemon, shoot at it until it dies"

One of the most famous video game hints of all time and one that has led to countless memes, DOOM's infamous "Shoot at it until it dies" has to be the best worst video game hint ever. The Cyberdemon is an intimidating figure, and one of the franchise's hardest bosses.

Players will most likely due to the behemoth more than a few times, upon which they will be greeted by this now legendary bit of advice. The joke was so popular that it even made it into the recent DOOM Eternal, this time referring to the Tyrant. While shooting at it until it dies is the ultimate strategy for nearly every DOOM enemy, this line will go down in history as the most hilariously unhelpful hint in gaming.