2010-2020: The Worst Romantic Movies Each Year Of The Decade (According To IMDb) 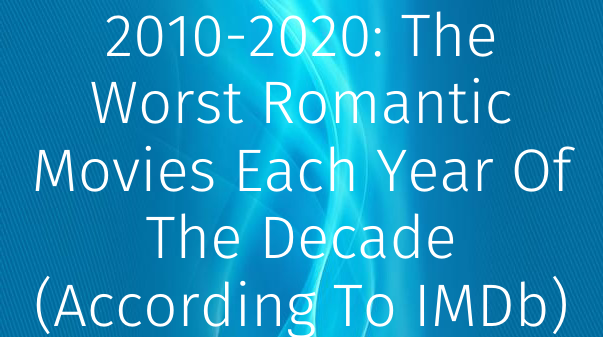 2010-2020: The Worst Romantic Movies Each Year Of The Decade (According To IMDb)

Love has been portrayed on the silver screen in innumerable shapes and forms. Sometimes, the bug bits us while on other occasions it fails to impress. With hundreds of romantic premises done thousands of time romance has always been a popular genre.

In spite of the subjectivity of the fondness, some movies just didn’t click with the audience. Here is the list of the worst romantic movies of 2010s decade from every year.

A reluctant Zoe played by Jennifer Lopez always pushed away people from her life when they start getting close. Her life story turns comedic and romantic the day when she has a baby through artificial insemination and meets the man of her dreams.

The Alan Poul film was Lopez’s comeback movie but suffered from cliché jokes, unrelatable characters, and a predictable plot. The direction and screenplay seemed uninspired and really made the movie totally unrealistic for the viewers.

A rom-com that is centered on the life female lead, Kate Reddy, played by Sarah Jessica Parker. It depicts how well she balances her job, marriage, and two kids.

A sagging comedy with a hopelessly outdated viewpoint on gender roles. A routine treatment was given to the familiar subject of the movie. It is a forgetful fluff and fails to leave any lasting impression on the viewers' minds.

Lola is the lead character whose heart is broken by her boyfriend but she found solace in her best friend who discloses his likeness for her.

It’s a sex 'n' drugs high school drama further ruined by Miley Cyrus’ overacting. Nearly all the characters felt one-dimensional. In spite of themes of heartbreak and hilarity, the film was shallow and pretentious.

On a family reunion, a long-divorced couple had to fake still being married. It is one of those movies which couldn’t be saved by the A-lister cast and a shining premise.

With names like Robert De Niro, Katherine Heigl, Diane Keaton, and Robin Williams, the audience got themselves the biggest shock when the movie fell flat due to its tasteless script.

Not Cool revolves around a group of Pittsburgh teenagers who spend their Thanksgiving break indulged in love, sex, friendship, and partying.

It is an obtuse coming-of-age film filled with ethnic stereotyping and vulgar sex jokes. Characters were bland with terrible acting by the actors. No original thought went into the romantic or comic side of the movie and the tone felt flat.

The movie is adapted from the erotic-romance book that goes by the same title in which a literature student Anastasia Steele falls for a handsome, billionaire Christian Grey who has a side not known to her.

The story of the movie revolves around a playboy named Charlie who stopped believing in relationships. Then he meets a mysterious Eva for sort of a casual affair but ends up wanting more.

It felt like to make up for the predictable main plot, the story was deliberately complicated with several uninteresting subplots. A cliché trope with a pleasant and funny ensemble defined the movie which failed to connect the dots.

The lead couple again failed to impress with a lack of chemistry and heat. The movie was boring, lacked the elements of basic storytelling, and eventually remains unsatisfying.

When a woman fell and woke up with the belief that she is the most beautiful and capable woman on earth and forgot about all her insecurities, it kickstarted the plot of I Feel Pretty.

Even though the movie had an interesting, contemporary premise, it suffered from a lack of conviction. Amy Schumer, who plays the lead, is likable. The alleged body-positive vibe of the movie confused the audience as the film contradicted its message on various occasions. It also landed in trouble due to the troubling message of body-shaming.

The plot of the movie follows a female sports agent who has been constantly boxed out by male colleagues. The woman, played by Taraji Henson, develops the ability to hear men’s thoughts. She uses the ability to her advantage and makes for the dragged, sometimes laughable movie, What Men Want.

The movie is a gender-swapped remake of the 2000 film What Women Want. The audience found the remake predictable, overlong, and uninspired. It lacked the genuine creative ambition and was only supported by Henson’s entertaining performance.

NextHarry Potter: 10 Voldemort Book Quotes That Should've Been In The Movies