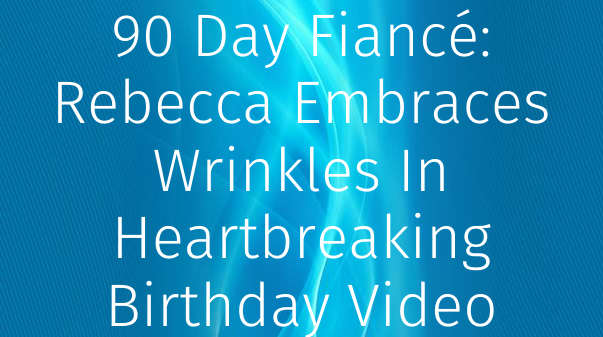 90 Day Fiancé star Rebecca Parrott broke down in tears during her birthday video as she addressed the negative comments about her age and appearance that she’s been getting on Instagram. The 51-year-old Rebecca and Zied Hakimi from Tunisia were introduced on 90 Day Fiancé: Before the 90 Days season 3. While they had initial hiccups about cultural differences and Rebecca worrying that Zied would turn out to be like her third ex-husband, they did get married in 90 Day Fiancé season 8. During her season, Rebecca had revealed how she always used filters while video calling Zied which gave her the tag of a “filter queen.” Even her social media photos are still heavily edited, which often makes “catfish” Rebecca look very different from what she looks like on TV.

However, Rebecca is someone who’s never denied that she used filters and had once even shared what app she uses to retouch her Instagram selfies. Once Rebecca hit 50, she also underwent a full-body makeover that included her getting laser liposuction and a tummy tuck. Rebecca also changed her appearance to make herself look youthful by getting injections in her face as she declared that “beauty is pain.” A majority of 90 Day Fiancé fans loved Rebecca’s before and after transformation which also gave her the confidence to post more make-up and filter-free photos on her feed.

However, in an unfiltered video that Rebecca shared to thank her followers for their birthday wishes, she also mentioned why she’s been staying off social media recently. Besides speaking about how there’s “a lot going on” in her busy life, she happened to scroll through older notifications while checking the comments on a video post Zied made for Rebecca. While trying to hold back tears, Rebecca said, “there’s something I wanna point out… I am so grateful today that I have the gift of having a birthday because a very close friend of mine that I have known for more than 40 years isn’t gonna make it to her next birthday.” Rebecca mentioned that her friend is very sick. Rebecca is angry about people telling her that she looks “old” or that she’s “getting old” as if it’s something bad.

Rebecca reminded her critics that so many people do not have the benefit of growing old. “So right now, I’m literally on my birthday feeling guilty that I’m another year older when someone that I love so much doesn’t have that, that gift,” Rebecca said tearfully. The former private investigator Rebecca wished for all her followers to live up to very old age. “May we all have that gift. I don’t care what I look like. I don’t care who thinks that I’m beautiful,” she added. Rebecca spoke about how she’s simply grateful about having the benefit to be able to grow old. “Apparently I have a wrinkled neck. That’s a big thing. Bring it on. I don’t care. Because old age is a gift we all don’t get,” mom of three, Rebecca said in conclusion.

While Rebecca rarely posts on Instagram these days, her husband Zied had recently revealed some good news for the 90 Day Fiancécouple’s well-wishing fans. The 28-year-old man has been working at a furniture store in Stockbridge, and his newer updates show that Zied and Rebecca have been staying happily together since their April 2020 wedding. Still, the hurtful comments about Rebecca’s relationship with Zied or the way she looks with or without filters never seem to end. But Rebecca should know that these haters are usually outnumbered by the fans who truly care.