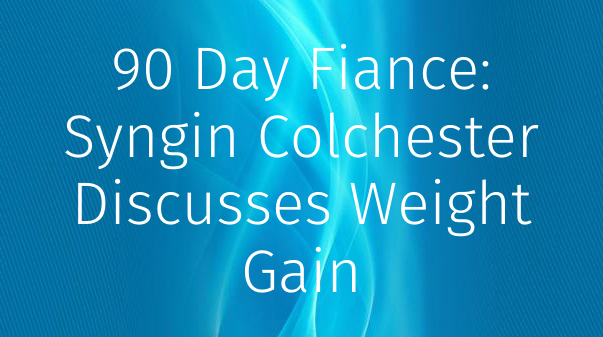 It’s been a few years since Syngin Colchester first came to the U.S. on 90 Day Fiancé and he recently got candid about the ways his body has changed since leaving South Africa. Between COVID-19 and domestic life, Syngin has gained some weight, but he’s not letting it bother him. Fans can sometimes be extremely judgmental about reality TV stars’ weight, and a healthy attitude about body image is a must for anyone from the 90 Day Fiancé franchise.

Syngin moved to the States to be with his then-fiancé Tania Maduro in Connecticut, and though many viewers had doubts about the stability of their relationship, they were married at the end of season 7. Since then the couple has appeared on numerous franchise spin-offs, including 90 Day Fiancé: Happily Ever After? and Pillow Talk. Syngin has been eagerly exploring his new home country and recently broke both ankles in a scary hiking accident during a cross-country trip.

On Instagram, Syngin shared a photo from a few years ago, before he and Tania got married. The picture looks very different from Syngin's current appearance, and he revealed that he has “picked up over 20 pounds of dad bod” thanks to “American food,” “marriage,” and “covid weight.” Syngin seems to have retained his signature sense of humor, however, and the post is peppered with laughing emojis and Syngin’s claim that he will begin his “fitness journey...in 2045 hahaha.”

In the past, Syngin has been criticized for his looks, and it’s clear he’s developed a thick skin. Even though he’s put on some pounds, Syngin hasn’t let it get him down. “I still love my self the same and I always will, because in that there is true happyness.[sic].” Though he expressed a desire to get in better shape, Syngin seems to be okay with his new physique. Syngin may have gained weight, but he still looks great and his attitude is as positive as ever.

Viewers can be brutal when it comes to roasting cast members for their weight gain, and as a male cast member who gained weight, Syngin is in a better and worse position at the same time. Usually it is female cast members who feel the most pressure to keep the weight off, but men are often societally discouraged from discussing their own body issues. Though Syngin may not be under as intense scrutiny as his female counterparts in the franchise, it’s still brave of him to be so open and honest about his body on social media.

The 90 Day Fiancé stars catch a lot of flack for their appearance and it’s often unfair criticism. Time and circumstance can have a huge impact on the body, and it’s only natural that many of the foreign partners gain some weight as they adjust to a new lifestyle. Syngin’s honesty about body is refreshing and a good sign for him personally. His wife Tania still thinks looks great and it seems that Syngin is able to tune out the haters and focus on what’s best for his health.

90 Day Fiancé: Miona Confirms Her Ethnicity After Blackfishing Scandal
About The Author

Maggie Mead is a reality tv writer who loves crafting a good story and can hold her breath for at least 10 seconds. When she isn’t rambling on about why Great British Bake Off contestants should never attempt a bake they haven’t practiced, she’s probably wrangling cats or striking a yoga pose.