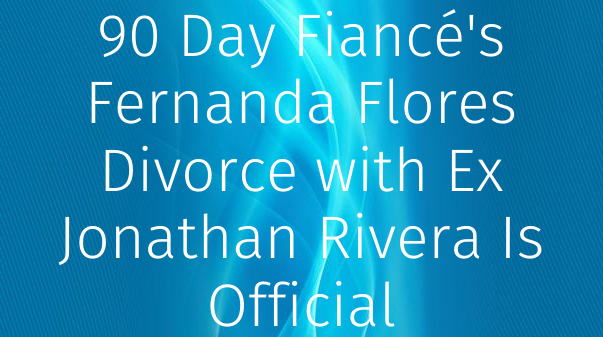 Fernanda Flores from 90 Day Fiancé has revealed that she's officially divorced with ex-husband Jonathan Rivera. The two are now single and can look forward to what their next relationship could bring them.

The once-happy pair appeared on season 6 of the hit TLC series. Fernanda chose to leave Mexico to be with Jonathan in North Carolina who was a real estate agent. The TLC cameras documented their ups and downs, showcasing them living together for the first time and planning their wedding in the 90-day period. Fernanda found living in North Carolina very hard and tried to urge her husband to move to Chicago to be around her family. The couple began to fight more as the young wife felt isolated and wanted to be around more people.

On Monday, Fernanda Flores revealed the news that she and Jonathan Rivera were officially divorced. The 21-year-old took to her social media to share with her fans that after almost a year and a half after they revealed they would be separating that the paperwork was finalized. The model posed in front of the Chicago courthouse, smiling ear to ear with one arm held high in the air (very Mary Tyler Moore-ish) with a caption that read, "Officially single." The TLC personality went on to note that the divorce was not a failure but more of a "win" as she was excited to see what the future had in store for her. She shared with her followers that she had forgiven Jonathan and allowed more blessings to be able to come her way, check out the full post below:

Officially single! By forgiving and closing chapters you open your heart to more blessings to come in your way. . . . . I can’t thank you enough to all my followers, friends and family for all your love and support in all this journey. This isn’t a failure, this is a win! Excited to see what God has planned for me.✨ . . . Oficialmente soltera! Perdonando y cerrando ciclos abres paso en tu corazón para más bendiciones. . . . No tengo palabras para agradecerte a todos mis seguidores, familia y amigos por todo su amor y apoyo en esta experiencia de mi vida. Estoy muy emocionada para averiguar qué tiene dios planeado para mi.✨

Rivera had said back in January of 2019 that their marriage had problems and finally decided to focus on himself. Rivera had hoped to be able to remain friends but the two were quickly intertwined in a legal battle that ended that dream. Fans of the TLC show will remember that the couple first met in Mexico while at a dance club and Rivera proposed only three months later. Their major issues seemed to be their age gap as many fights between the pair occurred over a difference in experiences.

The brunette beauty is not ready to give up on love and is now more than ever and very confident in who she is, saying she is ready to finally re-enter the dating world. The reality star admitted to signing up for dating apps but has yet to go on an official date. As for her ex-husband Rivera, he is back in North Carolina working on his business and healing for the long journey. Now that the past is behind them, fans can see that they are both going to make it after all.

90 Day Fiancé: Robert Reveals How His Son With Anny Was A Special Child
About The Author
Jennifer O'Brien (3509 Articles Published)

Jennifer is an avid Reality TV follower and is fluent in all Real Housewives drama along with the ups and downs of the 90 Day Fiance sagas. When she is not writing she enjoys traveling the world in search of the best beaches! Jennifer has been writing for over 15 years and would like nothing more than to have a proper sit down with the women of RHONY to 'Make It Nice.'