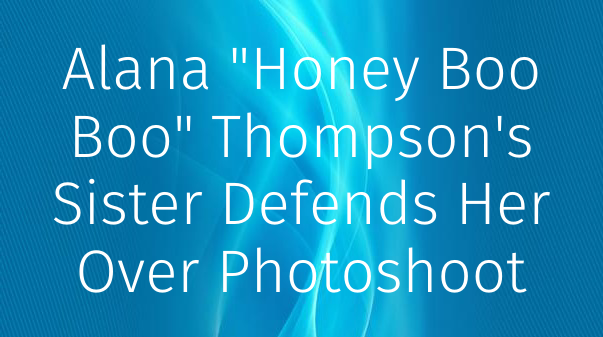 Alana "Honey Boo Boo" Thompson's sister is slamming the trolls who are criticizing the Toddlers & Tiaras star's size. Anna Cardwell's powerful comments come after her 16-year-old sister's interview with Teen Vogue, which included a glamorous photoshoot that showcased how much the child star has grown up since viewers last saw her on the television screen, went viral. In the interview, Alana announced that she's moving on from the public persona that made her famous, noting Honey Boo Boo is not the name her mother gave her. In addition to her name change, Alana revealed that she now attends a public school, has a boyfriend, works on the weekends, and aspires to become a neonatal nurse.

This isn't the first time the famous reality TV family has dealt with trolls due to their weight. The comments got so bad at one point that matriarch June Shannon even chronicled her weight loss journey and plastic surgery transformation on WE TV's Mama June: From Not to Hot in 2017. The series aired two seasons before she and her longtime partner Eugene Doak were arrested for felony drug possession.

After the viral Teen Vogue article and plethora of photos were released, Anna was extremely proud of Alana, which is why she had a lot to say to The Sun when she realized internet trolls were coming for her half-sister. "Alana is beautiful," she said. "There are models like Ashley Graham who are 200 pounds, and she has huge contracts." Alana continued to question if weight matters when it comes to beauty in today's age as there are many plus-sized models who are currently booking gig after gig. "Alana actually stood up and did it, and hopefully she gives others the courage to do it," she added. "Basically, she is putting herself out there, and all the teens who are overweight now -- she has given them the encouragement." Anna wrapped up her point by noting that Alana's shoot inspired her to believe that everyone is beautiful in their own way, and anyone could be a model if they wanted to.

After updating the Teen Vogue reporter and readers alike on Honey Boo Boo's newfound life, the former reality star opened up about her new sense of love for her body, despite the many trolls on social media. Honey Boo Boo said, "I feel like my generation is probably making it worse. Everybody's all about body positivity, body positivity, until they see a body they don't like. I don't understand why people think this way. Just because I got a little bit of extra meat on my bones, you want to hate me? I'll never get body shaming," she said at the time. She continued saying she does not care what people say because she believes she is beautiful. Alana wrapped up the interview by noting that her boyfriend is her only friend due to her mistrust of new people in her life. She explained that she doesn't have many friends because a lot of people are only her friend because of who she is.

While Alana and her family have dealt with comments about the young star's body from doing pageants at an early age, seeing what another troll has to say in 2021 never gets easier. The fat-shaming comments are a big reason why the Toddlers & Tiaras star decided to take a step back from the limelight. It's heartbreaking to watch Alana make an effort alongside some powerful statements about her growth in life, just to get degraded by a few people who can't see past her shape.

90 Day Fiancé: Does Mike Berk Have A New Girlfriend After Ximena Split