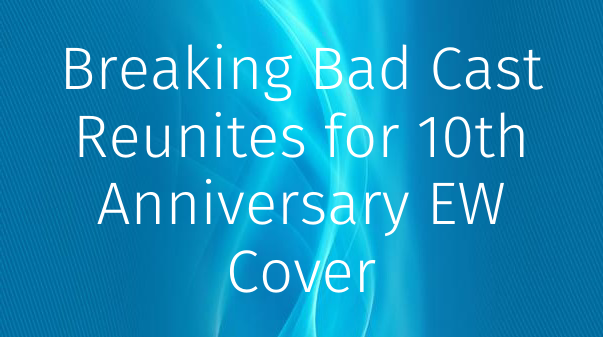 The former cast of the beloved series Breaking Bad has reunited on the cover of EW this week to celebrate the show’s 10-year anniversary. As well as bringing the cast members back together for the front cover, the issue also includes an exclusive interview with the stars.

Breaking Bad first debuted on AMC in January 2008 and has since been loved by audiences all over the globe. Created by Vince Gilligan, the series focuses on the story of chemistry teacher Walter White (Bryan Cranston) as he turns to becoming a meth manufacturer after being diagnosed with lung cancer. In pairing up with his one-time student Jesse Pinkman (Aaron Paul), the two find themselves thrown into a life of crime in an attempt to secure White’s family’s future. The show aired its final episode in 2013, but it still resonates in the zeitgeist as it celebrates a major milestone.

Entertainment Weekly has officially released the first look at the cover of this week’s issue, which showcases the cast members together once again. To celebrate the 10-year anniversary of the show, the familiar faces of the Breaking Bad stars have come together to offer insight into the development of the show. In the report released by EW, it’s revealed that the emotional reunion was full of hugs and tears of joy as the old friends were able to get back together to celebrate the esteemed show. As well as having an interview reflecting on the time the cast members spent as their characters, the magazine is also releasing an hour-long video interview with the cast.

Running for five seasons, Breaking Bad was one of the defining shows of its era and a touchstone of the Golden Age of Television. During its time on the air, the show collected an impressive 146 award wins, including multiple Golden Globes and Primetime Emmys (in addition to several other nominations). Its legacy is further continued by the ongoing spinoff series Better Call Saul (a prequel centering on Bob Odenkirk's Saul Goodman), which itself has proven to be quite the critics darling as it enters its fourth season. EW's coverage looks to be a wonderful way to celebrate Breaking Bad's landmark year, as fans will be thrilled to see the stars interacting with each other again and listen to behind-the-scenes stories.

In the past, Gillian has stated he'd be happy to continue the story of Jesse some way. In light of the reunion, perhaps it'll spur talks about the possibility of a sequel series that focuses on the character, or maybe Jesse will show up in Better Call Saul (be it the black-and-white modern day segments or in the story proper). Either way, it's only to be expected fans everywhere will be flocking to re-watch the beloved Breaking Bad to celebrate the anniversary in their own fashion.

MORE: 16 Dark Secrets About The Making Of Breaking Bad

Charlotte MG is a freelance writer with a love for all things related to the media and entertainment industries - ranging from books to the latest Netflix original. She was on the production team at Glastonbury Festival for 2 years, made Bradley Cooper go viral, and was once Elton John's neighbour. When she's not writing, trying to keep up with the world, or aimlessly scrolling, you'll probably find her with her head in a book, playing a video game, procrastinating, or trying to keep her puppy entertained. She's a South African expat currently residing in the UK and she's definitely still trying to figure it out.