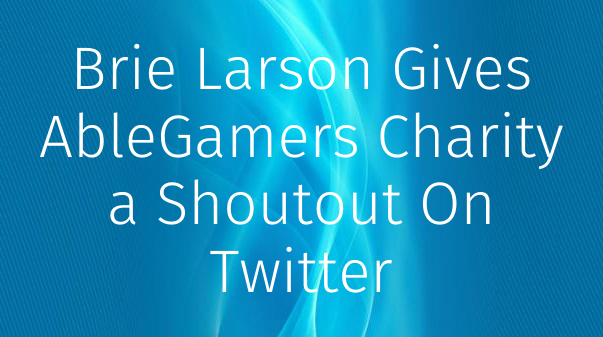 Brie Larson has extended her support for the AbleGamers charity on Twitter following her more pronounced presence in the gaming space recently. AbleGamers is a charity that helps make gaming more accessible to differently-abled gamers by providing specifically designed controllers and other equipment to ensure they get the best experience possible, free of charge.

Brie Larson recently did a Fortnite let's play on her YouTube channel, sparking a massive reaction in the gaming community. Former IGN writer and current Sony Santa Monica writer Alanah Pearce sent out a rallying call to Larson after seeing her video, asking her for support in raising money for her AbleGamers stream. Pearce, along with AbleGamers' Steve Spohn, hosted the Video Game Accessibility Awards in March 2020, which honors studios that make their games accessible to all types of gamers. After about a week, Larson finally responded via a video on Twitter. "Thank you Alanah for sharing the mission of AbleGamers with me, I love hearing what you're doing. Using the power of video games to bring people together and provide people with disabilities custom gaming set-ups, so that they can enjoy video games too is absolutely incredible. Thank you so much," said Larson in her video.

Brie Larson's heartfelt message did not go unseen either. Pearce expressed her gratitude and noted she's reached $13,500 out of her $50,000 goal so far. It's unclear if the Marvel hero will be personally joining Pearce to play some games, given Brie Larson's current obsession with Fortnite, but her support via Twitter will likely give a tremendous signal boost to Alanah Pearce's recent live streams. The actress did note that she would be personally supporting AbleGamers in some capacity and encouraged others to do the same.

90 Day Fiancé: Memphis' Leaked Video Reveals Why She Left Tell-All
About The Author

Cade Onder is a 20-year old video game, movie, and chicken tender enthusiast. He has been writing about games since he was 14 and is always trying to learn more about the gaming industry. You can follow him on Twitter @Cade_Onder for bad jokes, bad takes, and pictures of chicken tenders.