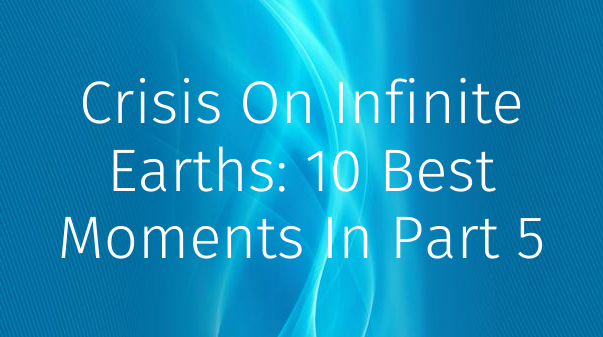 Crisis on Infinite Earths, the event that elevated the annual crossovers to a whole new level, officially set the Arrowverse on a new path after concluding the 5-part saga earlier in January. After having the entire Multiverse rebooted following its destruction by the Anti-Monitor (LaMonica Garrett), a new chapter began for The CW’s DC TV shows. That final installment took place on Legends of Tomorrow as the time-traveling drama wrapped up the ambitious storyline. Following the massive events of part 4, which happened on Arrow, the follow-up was all about the aftermath.

But it also came with one final showdown against the big foe. Given that a lot of things happened in the fifth installment of the crossover, there’s a lot to break down in terms of the best moments. Having said that: it’s time to look at the best moments from part 5 of Crisis on Infinite Earths. Disclaimer: this list will include major spoilers from Legends of Tomorrow season 5, episode 0 (produced as the 8th episode, but labeled “special episode) which is part 5 in the crossover.

10 The Return of Beebo

For fans of the Legends, it is always a celebration whenever the adorable fur ball pops up for an appearance. Despite all the cameos and crossing over with other DC media, the crossover’s budget managed to include a giant-sized Beebo to emerge in the early parts of hour 5. Even though it was just an illusion, the image of a Godzilla-like Beebo roaming around in Central City was comedic as well as typical Legends of Tomorrow.

It doesn’t take long for the heroes to find out that Oliver’s final heroic act gave birth to a new Earth that unifies all the DC characters on The CW. The episode begins from Kara’s (Melissa Benoist) perspective as she discovers that this isn’t the same National City that she came to love.

With Lex Luthor (Jon Cryer) now owning the D.E.O. and being seen as a global hero, it is one version of hell for Kara. But the new reality has changed several things and now has the heroes all on one Earth.

Supergirlwasn’t the only DC series to officially merge Earths with the characters on Earth-1. With Black Lightning making its Arrowverse debut earlier in the crossover, Jefferson Pierce (Cress Williams) makes an electrifying return in part 5. This confirms that the series is now also part of the shared reality with the other superheroes. Despite starting as not having any ties to the Arrowverse at all, three seasons later, the Pierce-family series is with the other characters, opening up the door for many future crossovers.

While many of the characters tackle Oliver’s death, it’s the connection between Sara (Caity Lotz) and Barry (Grant Gustin) that becomes a highlight in the crossover. It’s not often in the crossovers that Flash and White Canary get to engage with one another as much as they did in Crisis on Infinite Earths.

But with Oliver’s death, and his respective bond to them individually, it was understandable that they would grow closer. Still, it was an unexpected bonding experience that left fans wanting to see more of this dynamic between the Scarlet Speedster and the time-traveling vigilante.

6 The New Multiverse Gets Teased

While the heroes of Earth-Prime don’t know about it (yet), there is a new Multiverse in the Arrowverse. Even if crossovers with those shows aren’t happening at least for the time being, the montage of Earths that were revealed was still amazing. From the upcoming Stargirl series set on a new version of Earth-2 to Earth-96 revealing Brandon Routh’s Superman still being alive, it set a new precedent for Arrowverse’s Multiverse. All of Greg Berlanti’s DC TV shows, present and new ones (HBO Max’s Green Lantern), are now officially part of the multi-franchise that he helped create.

Even though Oliver had his showdown with the Anti-Monitor, the powerful foe still managed to make it back to Earth-Prime. While trying to repeat his mission, the heroes got together quickly to take him down once and for all. The final battle was genuinely a lot of fun to see on-screen with so many heroes present from all the shows. It’s only through the annual crossovers that fans can see big team battles like these which is why they are so appreciated.

Despite the new changes and the creation of Earth-Prime, Oliver remained dead in this new world. However, his heroic sacrifice didn’t stay hidden as the world got to find out together what the Green Arrow and his league of allies had done. After having had his name mudded in the media in past seasons of Arrow, this recognition was one of a kind. With the President even embracing him as the first hero in the age of superheroes, Oliver will forever be remembered.

The crossover not only honored the live-action history of DC, but also one of the talents involved with the Crisis on Infinite Earths comic series: Marv Wolfman. The iconic comic writer, along with legendary artist George Pérez, together crafted the story that redefined so much for DC Comics.

Wolfman actually got to co-write the Arrow portion of the crossover to help adapt the Monitor’s origin. But the writer also got to make an on-screen appearance in the form of a cameo. Seeing Wolfman getting to share his love for Flash and Supergirl was both terrific and a bit ironic. In the original story, Barry and Kara died in the Crisis event. To see Wolfman share his passion for them is, therefore, a bit funny since they got killed in his book.

The crossover ended the longtime build-up that the Arrowverse had teased over the last few years. But despite everything that happened, the final scene gave a fun treat for viewers, teasing what might come down the line. While he isn’t seen on screen, the sound of a monkey is heard, cutting over to an opened cage with the name “Gleek” on it. This became the first inclusion of the Wonder Twins mythology in the Arrowverse as any of the ongoing shows could introduce them in the future.

1 The Justice League Is Born

After years of teasing, build-up, and foreshadowing, Crisis on Infinite Earths allowed the Arrowverse to form its own version of the Justice League. The name is never said, but several aspects confirm that the League is officially a thing in this universe. From the Hall of Justice, the heroes’ round table, and the line-up having a very Justice League-kind of vibe, that moment was a payoff in many regards. Even though they have operated as a team for years, this crossover is what solidified the concept as they will be using the Hall of Justice as their shared headquarters for future events.

Andy is a senior writer at Screen Rant as he has covered the world of entertainment journalism since 2010, including superhero/comic book media. In addition to his work as a reporter, Andy co-hosts The Flash Podcast while running and producing the entire DC TV Podcasts network. He is also the founder/editor-in-chief of The Marvel Report since Fall 2015. Andy has previously written for sites such as FanSided, KSiteTV, TV Fanatic, It's Just Movies, Heroic Hollywood, TV Overmind, and more.