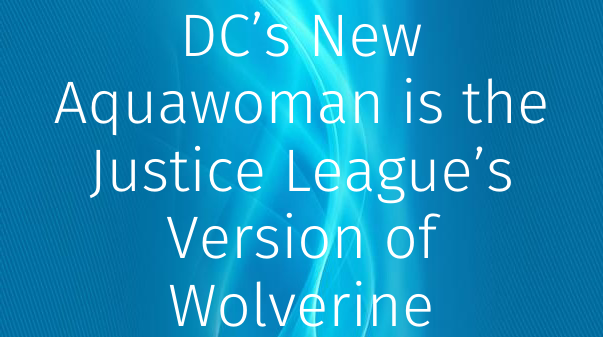 DC's Future State is in full swing, and the event features the next generation of heroes forming a new Justice League. Andy Curry is a part of this new team, known in the future as the all new Aquawoman. Unfortunately, the first issue of Future State: Justice League #1 sees the team unable to trust one another after the mysterious murders of the Legion of Doom. During the rising tensions, Andy is forced to unleash her deadly clawed gauntlets, proving that she's the new Justice League's version of Marvel's Wolverine.

The daughter of Aquaman and Mera, Andy Curry is just as strong, heroic, and determined as her parents, operating out of her father's lighthouse in Amnesty Bay while her parents are out exploring the Confluence (an inter-dimensional nexus that connects worlds across space). According to the issue from writer Joshua Williamson and artist Robson Rocha, Aquawoman explored the universe as well, "forging new pathways and uniting them like never before." However, it also confirms that it came at a great personal cost that seems to have left her heavy on aggression. Now, Aquaman has returned to Earth to fight alongside Jon Kent's Superman, the new Wonder Woman Yara Flor, Far Sector's Green Lantern, the Next Batman Tim Fox, and a Flash from another reality named Jess Chambers.

However, this new Justice League is operating under the policies of the Justice League Charter, formed when the League got too big and suffered a devastating betrayal. Now, the League is kept small, and they're not supposed to know each other's secret identities or be involved in each other's personal lives (rules which Andy and Jess are currently breaking). However, when the new Legion of Doom is murdered and the evidence leads to distrust among the League, it creates the perfect opportunity for the true killers to strike, posing as the the heroes themselves. As such, Andy is forced to attack a false Superman with her incredibly sharp, nigh-unbreakable gauntlets, which will remind many fans of Marvel's Wolverine.

Considering the fact that her claws are sharp and strong enough to cut through Superman's skin, it's not hard to compare her weapons and abilities to that of the X-Men's resident brawler. Wolverine has long wielded his adamantium-covered claws, which are indestructible and allow him to cut through almost anything, much like the new Aquawoman's gauntlets, which were apparently forged under the intense pressures of the Marianas Trench, making them unbelievably dense, highly durable, and likely almost unique in DC's world.

Thankfully, Andy didn't end up slashing the real Superman's face with her Wolverine-esque claws, as it was actually a member of the Hyperclan, a group of sinister White Martians who have now captured every member of the League, seemingly prepared to take their places in order to take over the world. Hopefully, Aquawoman and her allies in the Justice League will be able to break free and stop the Hyperclan before their identities and reputations become damaged beyond repair. But whatever happens next, it's safe to say that Future State has managed to dodge the usual risk of casting its undersea hero as an unnecessary addition to a more powerful ensemble - Aquawoman is a vicious warrior, and fast becoming the breakout character of the new Justice League.

Kevin Erdmann is one of Screen Rant's staff writers. With a major in Cinema Studies and a minor in Comics and Cartoon Studies from the UofO, Kevin is pretty sure he's writing for the right site. While Kevin is a huge Marvel fan, he also loves Batman because he's Batman and is a firm believer that Han shot first. Disney also shares a big part of his fan patronage. Kevin lives in Oregon with his wonderful wife and sinister cat who is no doubt currently plotting his demise.