Deadpool 2: Every Reveal From The Director's Commentary 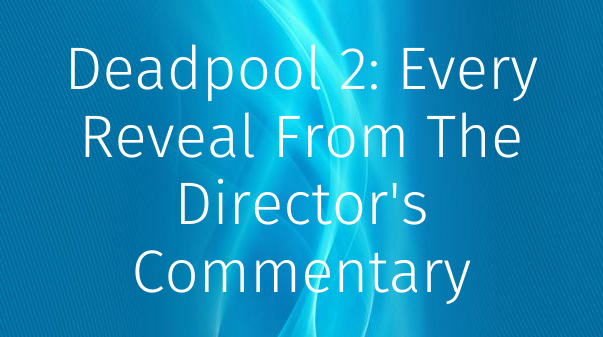 Deadpool 2: Every Reveal From The Director's Commentary

After rocking audiences earlier this year, Deadpool 2 is back with even more to offer fans. The film is currently available to buy digitally prior to the physical release in two weeks.

The rollout has been heavily promoted with The Super Duper Cut receiving the most attention in regards to what is included. The extended cut debuted at San Diego Comic-Con, unveiling 15 additional minutes of footage. However, there's more to Deadpool 2's home release. Deadpool 2's digital and physical releases are packed with bonus features for fans eager to dive deeper into the Merc with a Mouth's sequel. There are multiple featurettes, gag and blooper reels, and so much more.

Related: Deadpool 2's Time Travel Makes No Sense... But We're Going To Try And Explain It

One of the special features that includes the most behind-the-scenes reveals is the audio commentary done by director David Leitch, star Ryan Reynolds, and writers Paul Wernick and Rhett Reese. The four of them brought plenty of fun facts, alternate scenes, and more with them, and we've compiled all the major reveals into one helpful list.

Deadpool famously got his name in the movie canon through the ongoing Dead Pool at the Sister Margaret's School for Wayward Girls bar. In order to play with that, but also provide a fun Easter egg for Deadpool 2, the Chinese version of Wade Wilson's superhero name can be spotted. It is revealed during the opening of the movie that the neon sign featured behind Wade during the Hong Kong sequence actually says "Pool of Death."

One of the best parts to Reynolds' performance as Deadpool is all the ridiculously hilarious one-liners - but what many may not realize is all the work that goes into Deadpool's speaking scenes. Reynolds revealed that for every scene with Deadpool wearing the mask and talking, he then re-films the scene by himself with performance capture technology so that Weta could capture his emotions and add them to the mask's movement in post-production.

The other added benefit of the mask is the ability to change lines later on, which is what they did in the Say Anything scene outside the X-Mansion. As he rattled off the film's entire plot, Reynolds just said "blah, blah, blah" during the filming of the scene to prevent spoilers from leaking. Well played Deadpool.

Related: What REALLY Happened With Origins Wolverine In Deadpool 2

The entire story of Deadpool 2 revolves around the controversial decision to kill Morena Baccarin's Vanessa early on. During the scripting phase, which began in June 2015, Leitch confirms they did have a version of the script that kept Vanessa alive. The movie's plot had Vanessa leave Wade instead of dying, but they didn't feel like it worked for what they wanted to do. Ultimately, they decided that killing Vanessa was the best direction for the movie, so they did.

Fox Made Them Cut One Specific Joke

The Deadpool movies are crammed full of jokes, especially of the pop culture and fourth wall breaking kind. Due to the success of the franchise so far, Fox has been pretty lenient with what Deadpool can get away with saying. However, there was one joke early on during Wade's talk with Weasel at the bar that Reynolds says Fox made them get rid of. It was the only one and Reynolds is still a bit heartbroken over the decision. He wouldn't say on the commentary what the joke was, only that it was the only time Fox stepped in. Based on this information, it appears to be the Disney joke Reynolds previously revealed was cut.

The Suicide Montage Was Planned For First Film

One of the other surprises of Deadpool 2 was the film starting off with him attempting to kill himself. In the the theatrical cut he blew up his entire apartment, but that was just one of his many attempts. This wasn't a concept they created for Deadpool 2 though; the idea originally came to them for the first film. It was removed in the original, and they once again had to cut it in the sequel. Thankfully, fans can still see it now in the extended cut to get an extra dose of Deadpool's antics.

Although Deadpool takes place in the X-Men universe, the connections so far have been extremely loose and mostly tongue-in-cheek. One of the first film's funniest gags was Wade visiting X-Mansion to ask for help, which is a location once again in the sequel. For the second film, they actually got to film at the X-Mansion location from X-Men 2. Even though the X-Men that fill it in this film are very different from the ones features in that sequel, its a fun connection for them to make.

Cooper Hood is a news and feature writer for Screen Rant. He joined Screen Rant in late 2016 following a year-long stint with MCU Exchange, which came after first developing an MCU blog of his own. He graduated college in 2016 with a Bachelor's degree in Media & Public Communication, with a minor in Media Production. Cooper’s love for movies began by watching Toy Story and Lion King on repeat as a child, but it wasn't until The Avengers that he took an invested interest in movies and the filmmaking process, leading him to discover the world of film journalism. Every year Cooper looks forward to seeing the latest blockbusters from the likes of Marvel, DC, and Star Wars, but also loves the rush to catch up on Oscar films near the end of the year. When he isn’t writing about or watching new releases, Cooper is a fantasy football obsessive and looking to expand his Blu-Ray collection – because physical media is still king! Follow Cooper on Twitter @MovieCooper.