Doctor Who: The Edge of Reality Review - A Glitchy Universe 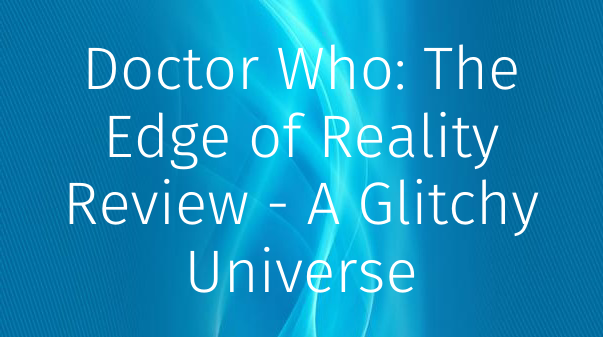 Doctor Who: The Edge of Reality Review - A Glitchy Universe

Doctor Who: The Edge of Reality, developed by Maze Theory and Just Add Water in partnership with BBC Studios, ports Doctor Who: The Edge of Time VR experience to PC, PlayStation 4, Xbox One, and Switch. While the ports make Edge of Reality far more accessible, its core systems still force awkward settings onto unsuspecting players. Die-hard Doctor Who fans may find solace in the Easter eggs and references to the series, but the gameplay’s charm wanes quickly in the face of glitches, bugs, and misleading objectives.

Players control a faceless, nameless protagonist traversing the universe to recover three Time Crystals to save the Doctor from the end of time. After reuniting with the beloved Time Lord, players must then find the source of the Reality Virus and eliminate it. Some dialogue can get confusing with sci-fi jargon, but Jodie Whittaker and David Tennant’s passionate performances improve the experience. In comparison, the story is an exciting Doctor Who-esque plot and its development is delivered through exposition instead of gameplay, which is a missed opportunity for Doctor Who: The Edge of Reality’s overall experience.

Players familiar with the Doctor Who franchise will experience familiar moments through levels featuring well-known enemies like the Daleks, Cybermen, and Weeping Angels. Unfortunately, their appearances result in a clunky encounter with unresponsive controls and bland level design. As a former VR title, the straightforward layout of levels is unsurprising but disappointing for PC and console players. Doctor Who: The Edge of Reality is not without its strengths, the greatest of which comes in the form of the Doctor’s Sonic Screwdriver. The tool maintains a near-constant utility throughout levels, unlocking vital pieces to puzzles and rewarding player exploration with hidden items and treasures. More importantly, it cements the player’s place in a critical role in saving the universe.

Similar to dangerous encounters in the Doctor Who television series, Doctor Who: The Edge of Reality encourages players to solve challenges with smarts instead of violence. Each of Edge of Reality’s levels contains several puzzles that block progression. These puzzles range from tasks as simple as opening a door to tweaking a satellite to communicate with the Doctor. Though the level design suffers from VR-oriented style choices, puzzles are implemented seamlessly into the environment. These puzzles pose an entertaining challenge that requires players to utilize the level around them and items at their disposal. Unfortunately, failure is much more likely to come in a game-breaking glitch or unresponsive controls rather than difficulty. The Edge of Reality also lacks a regular autosaves, forcing players to completely restart levels after game-breaking bugs.

Like many VR-originated titles, Doctor Who: The Edge of Reality’s graphics are immersive and eye-catching. Transitions between peaceful reality and Time Glitches are thankfully smooth, giving players an eerie chill as they traverse a universe on the brink of collapse. Aside from the beautiful layouts of lush forests and Victorian London, players may find issues with the lighting of underground or night locations. Though exaggerated lighting tends to amplify immersion on virtual reality consoles, it regularly obscures mission objectives in black shadows that players cannot improve in the game’s provided settings.

Overall, Doctor Who: The Edge of Reality is an excellent vision improperly executed for non-VR systems. Dedicated fans of the Doctor Who franchise will enjoy becoming one of the Doctor’s Companions, despite the eventual headaches that transpire from forced restarts. The journey’s story could be enjoyable with a few polishes, which Maze Theory and Just Add Water will hopefully add with future updates, but as it stands now, only those desperate for an adventure with the Doctor should pick up Doctor Who: The Edge of Reality.

Doctor Who: The Edge of Reality is available now on PlayStation 4, Xbox One, and PC, with a Nintendo Switch version releasing October 28th, 2021. Screen Rant was provided with a PC code for this review.

2.5 out of 5 (Fairly Good)
Spider-Man 2099 Would Fix One Of The Marvel Games' Biggest Worries
About The Author

Natalie Lindner is a Game Features Writer for Screen Rant, creating content on the past, present, and future of games in the industry. Prior to this, she worked out of a writing consultancy in Rhode Island from 2018 to 2021, where she helped college students improve their writing abilities. Natalie has contributed her video game writing to several smaller websites and projects since 2018 and is eager to continue that journey with Screen Rant.

Working out of New Hampshire, Natalie spends the time she isn’t writing about games outside; hiking or biking. On those rainy days, she can be found striving for action on the latest FPS or perusing the latest comic books.