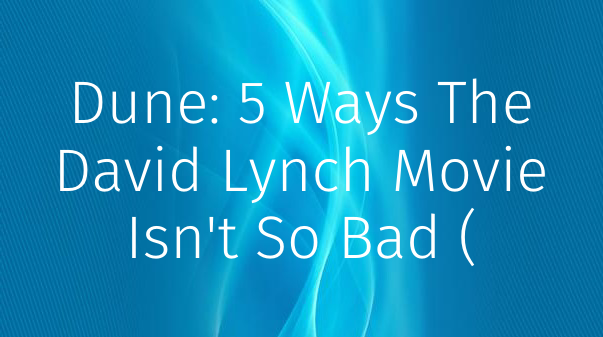 Just recently, the trailer for the latest adaptation of Frank Herbert’s science-fiction epic Dune made its way online. The reactions were universally positive, with old fans and newcomers excited for Blade Runner 2049 director Denis Villeneuve’s next big outing.

But as hype for the new Dune rose, so did the retrospective looks at its infamous predecessor: the 1984 adaptation by David Lynch. The ‘80s Dune is one of the most beloved cult classics ever made, but not everyone who’s seen it was sold on its spice.

10 IT’S NOT SO BAD: That Toto Soundtrack

Toto – the band responsible for the now-immortal and very relaxing song “Africa” – may be the last musicians anyone would expect to hear in a space opera like Dune, and yet they composed the movie’s score. Despite this odd pairing, Toto delivered a soundtrack that complimented its equally unique movie.

Since then, Toto’s musical interpretation of Dune became synonymous to the franchise, with subsequent media like games and the TV series emulating their soulfully mystical vibe rather than going for something grand as expected of space operas. It’s a shame that Dune is Toto’s only movie score, since they did a pretty good job with it.

9 IT’S BAD: The Pacing Is Glacial

Frankly, Dune is boring. With a director’s cut clocking at three hours and a theatrical run that still exceeds the two-hour range, Dune is a chore to get through. The iconic moments are spread too far and between while scenes just drag on forever, making it difficult to recommend to newcomers and casual viewers.

And even in this bloated state, Dune is a condensation of the gargantuan novel, where the chronicled events span across years and generations. Technically, the movie is a sped-up recounting of Paul’s tumultuous journey from aloof royal to a hardened revolutionary and yet, it’s as exciting as counting grains of spice.

One thing Dune can’t be faulted for are its visuals. From the Harkonnens’ harshly industrial lairs to the Stillsuits used by the Fremen to survive Arrakis’ unforgiving deserts, Dune’s detailed world evokes a visually lush yet internally barren atmosphere that perfectly reflects its themes. While it may be difficult to remember characters due to how interchangeable they can be, it’s hard to forget their looks.

Additionally, strange beings like the otherworldly Guild Navigator and the gigantic Sandworms were brought to life using limited yet impressive ‘80s special effects. The fact that some fans actually prefer the 1984 movie’s over-the-top style over the remake’s realistic but drab look says enough.

7 IT’S BAD: The Script Is Terrible

Given the story’s setting, tone and goals, it makes sense for the aristocratic characters to talk with a royal aura and in a lofty tongue. But instead of sounding Shakespearean, Dune’s language comes off as simplistic and stilted, rife with the forced profundity heard in a spoof of a Shakespeare classic.

People around Paul talk in circles about prophecies or whatever bit of lore is currently being explained, all the while Paul repeats what he heard a few seconds ago either out loud or in his repetitive inner monologue. As if things couldn’t get worse, everyone who isn’t Baron Harkonnen whispers their lines, and Paul isn’t the only one afflicted by an intrusive inner voice. The best that Dune’s script did was gift audiences with Gurney Halleck’s jarring utterance of “young pup.”

6 IT’S NOT SO BAD: The World Is Actually Interesting

While it could be accidental, Dune still did a relatively decent job of making its world interesting. Though buried under tons of droning exposition and never-ending conversations, the history of the titular planet and its warring families makes for some unique science-fiction.

Dune’s lore feels familiar yet alien. Even those who may not like the movie admire the background lore’s intricacy, maybe inspiring them to do some extra research just to learn more about culture on Arrakis. To be fair, credit for the world-building falls on the novels, but Dune did a good enough job of bringing the desert planet and those fighting for it to the big screen.

5 IT’S BAD: The Acting Is Flat

Even with big names like Sean Young, Max Von Sydow, Virginia Madsen, and Kenneth McMillan, the talent assembled for Dune couldn’t salvage it. Most of the blame could be placed on the script and given what the cast had to recite, they can’t be faulted for turning in a paycheck job instead of acting their hearts out.

In fact, stories about the actors’ time on the movie are more interesting than the characters they play. Standouts include Kyle MacLachlan (Paul Atreidis) who was an avid fan of the books and couldn’t wait to portray his favorite character (i.e. Paul), or the fact that Sir Patrick Stewart (Gurney Halleck) was cast by mistake and didn’t know who Sting was.

4 IT’S NOT SO BAD: Those Evil Harkonnens

Dune’s cast is comprised of barely-sentient bores and exposition devices, but the Harkonnens are the exception. Over-the-top and cartoonishly evil, the Harkonnens – the Baron Harkonnen and his nephews the Beast Rabban and Feyd-Rautha – give the self-serious Dune some much needed levity.

Everything the Baron does and says is a hoot, mostly because of how much he relishes being evil as much as a Saturday Morning Cartoon villain would. His nephews add to the fun, but Sting as Feyd steals the show by being such a weirdly perfect casting choice that’s nigh-impossible to top.

3 IT’S BAD: There Are Too Many Problematic Implications

Calling Dune problematic is an understatement. Underneath the talk of spice and the Spacing Guild's infighting is a colonial fantasy, where a literal white savior shows the colonized minorities how to properly fight for freedom. Not helping is the ominous, rain-drenched ending – where Paul declares war on civilization after becoming Arrakis' new god – that’s strangely framed as a good thing.

These themes are also present in the books but they’re deconstructed, or at least addressed. If the source material shows how being a peoples’ savior is more trouble than it’s worth and how it only engenders an endless cycle of violence and corruption, they’re retold with a straight face in the movie.

2 IT’S NOT SO BAD: It’s The Most Ambitious Star Wars Rip-Off

Made in the aftermath of Star Wars, Dune was one of many doomed attempts to recapture the financial might and popular impact of the galaxy from far, far away. What makes Dune unique compared to pulpy knock-offs like Starcrash or Battle Beyond The Stars is its ambition and scale, which clashes with Star Wars’ simplicity.

Dune is based on a grandiose literary classic, yet it desperately tries to water itself down into a blockbuster space opera. While it’s more interesting as an artifact more than entertainment, the resulting clash is something that must be seen at least once. The closest Dune has as a rival for the throne as the best Star Wars-clone is Flash Gordon, which is a different kind of movie and space adventure altogether.

David Lynch is one of the most original storytellers to ever grace cinema, which makes Dune stick out all the more. When put beside surreal masterpieces like Eraserhead and Twin Peaks or compelling dramas like The Elephant Man and The Straight Story, the schlocky space opera that is Dune fails in all regards.

Lynch agrees with the criticism, disowning Dune despite its cult status. The director has described his time on the adaptation as “selling out,” comparing his lack of final cut and its commercial failure to “dying twice.” Unsurprisingly, Lynch wants nothing to do with Dune anymore, refusing to work on any rerelease when invited and having no interest in the upcoming remake.

Part-time artist and writer, full-time overthinker. Believes that Samuel L.Jackson is the greatest actor on earth and misses video stores.