Escaping Pablo Escobar Makes For an Improved Narcos in Season 3 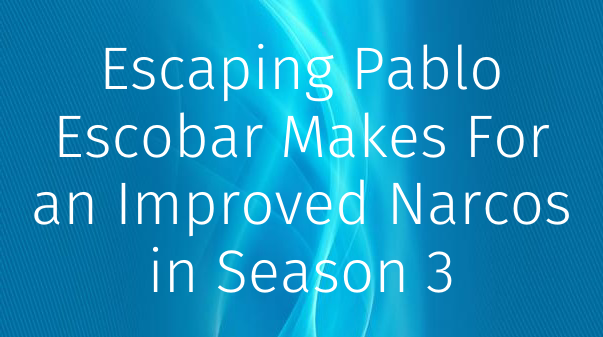 Escaping Pablo Escobar Makes For an Improved Narcos in Season 3

Out from under the shadow of Pablo Escobar, Netflix's drug war drama Narcos begins season 3 with a new focus and Pedro Pascal as its leading man.

"God forbid anyone thinks they're the bad guys." That line is spoken early on in Narcos season 3 by Pedro Pascal as Javier Peña, half of the duo who spent the last two seasons of Netflix's cocaine-centric docu-drama taking down the most notorious drug kingpin of all time, Pablo Escobar. The line would have felt earned in either of those two seasons, and it's fitting again at the start of this engaging new storyline for the series. The end of season 2 was the end of Escobar, as the series' sometimes text book-like recounting of the events leading up to his demise had to eventually document that, too. But in carrying out the end of one story, Narcos carefully orchestrated the beginning of another; as in order to take down one monster, the DEA and other organizations found themselves in league with monsters.

With Escobar now gone, Narcos season 3 begins with something of a soft reboot. In addition to the departure of Wagner Moura as volatile kingpin, the series also said goodbye to Boyd Holbrook as Steve Murphy, the ostensible co-lead and provider of the formerly pervasive voiceover that robbed season 1 of so much of its nuance and subtlety. In Moura and Holbrook's absence, Pascal, like his character Peña, has been given a promotion in the new season, and the charismatic actor is finally offered a chance to lead the semi-anthological series as it shifts from telling the tired tale of Pablo Escobar to the much less familiar – at least to American audiences – fall of the Cali cartel. The result is a reinvigorated series that balances dramatic tension with real-life drama better than ever.

The shadow of Escobar looms large, but the former tricks of the Narcos trade are used far more sparingly. Unlike Pablo, the Cali cartel is secretive, so archival footage of news broadcasts depicting the DEA's entanglements with members of the Cali cartel is less readily available and therefore introduced only after major events happen. Moreover, the voiceover that was so languid and monotonous during the first two seasons, like someone reading directly from a Wikipedia page about Pablo Escobar, crackles instead with a weary intensity. That's likely due to Pascal replacing Holbrook's earthy drawl with a critical matter-of-factness, but it may have more to do with the fact that the story of the Cali cartel isn't nearly as played out in film and television as Escobar's. When a fictional movie about your character is a running gag on a season of Entourage it's time to look elsewhere for material (sorry, Aquaman, but it looks like you're on this list, too).

Season 3 sees intrigue generated by the time crunch of the world's most powerful cartel living out the last six months of its life with reckless abandon before trying to go legit. People in the American government, eager to score another win in the War on Drugs so soon after dropping Escobar, are underwriting the cartel's legitimization. The result is something of a bureaucratic nightmare for Peña, as his elevated profile has him caught between those in the military and intelligence communities using the drug war to raise funds to keep doing what they're doing in perpetuity, and his own sense of duty to dismantle the cartel. That puts Peña in direct contact again with the slippery CIA agent Bill Stechner (Eric Lange) whose methods and motivations often seem in concert with the very organizations he's purportedly trying to undo.

The ecosystem of the various government agencies aligned in the expensive, fruitless, and disastrous War on Drugs seems also to include the cartel itself. This gives Narcos a fascinating new angle from which to approach its story and a point of view it's never really expressed before. Unlike Escobar who was all about fame and notoriety, the Cali cartel runs things like a true corporation, presenting one face to the world and keeping all of his dirty little secrets hidden from the public eye as much as possible. The "profits at any cost" mentality drives the members of the cartel to legitimize themselves, suggesting the line between criminality and capitalism is as thin as one might expect.

That fits with the scope of the Cali cartel that the show is intent on demonstrating in the first two hours. A quick montage in episode 2 establishes the expanse of cartel's influence and its ability to manipulate the police, military, and government to suit its needs. But it also matches the scope of the season itself, which develops compelling threads for not only Peña but also the members of the Cali cartel – notably the ostensible head of the organization Gilberto Rodriguez (Damián Alcázar) and hitman Pacho Herrera (Alberto Ammann) – and those unfortunate enough to be caught in the group's circle of influence; namely, Jorge Salcedo (Matias Varela) a security consultant, Maria, a recently widowed woman and object of affection for Miguel Rodriguez Orejuela (Francisco Denis), and a money launderer and his wife played by Sense8's Miguel Angel Silvestre and Halt and Catch Fire's Kerry Bishé.

This season also sees the story expand to New York City as the cartel manages the biggest link of its distribution chain with the help of the ruthless Chepe Santacruz Londono (Pepe Rapazote). The shift in locale again demonstrates Narcos' commitment to the verisimilitude of its settings, as the show's depiction of a gritty '80s NYC feels as distinctly of a time and place as Colombia did in the first two seasons. It all lends the series an air of authenticity that was such a big part of its appeal in seasons 1 and 2, even while season 3 ratchets up the dramatic stakes by relying less on archival news footage and its familiar voiceover device.

In all, out from under the shadow of Pablo Escobar, Netflix's drug war drama has found an exciting new storyline to follow and it's all headed up by Pascal, who finally gets to play the series' leading man.

Next: Fall 2017 TV Premiere Dates – All The Shows You Won’t Want To Miss Out On

Narcos season 3 is currently available in its entirety on Netflix.