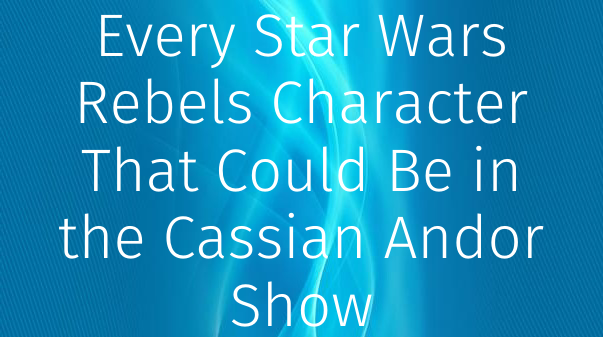 New Star Wars seriesAndor is set to release in 2022 on Disney+, and it could bring with it some familiar faces from the Star Wars universe. The Rogue One: A Star Wars Story spinoff series will feature the return of Rebel spy Cassian Andor, his droid companion K-2SO, and future Rebellion leader Mon Mothma. The series will begin in 5 BBY, concurrent with the first seven episodes of Star Wars Rebels, so several Rebels characters could appear in Andor.

At this point in the timeline, the various Rebel cells hadn’t coalesced into the Rebel Alliance yet, but early members who appeared in Rebels - like Bail Organa, Jan Dodonna, and even Princess Leia - may appear as commanding officers (or political allies) to Cassian, and cameos from R2-D2 and C-3PO are possible as well. Saw Gererra and his Partisans (including Edrio) hadn’t had a falling out with Mon Mothma yet, so an appearance from them is also likely.

Cassian is a user of the “Fulcrum” alias, so an appearance from the original Fulcrum, Ahsoka Tano, is possible, with the former Jedi potentially being involved in Cassian’s introduction to his Rebel cell. The veteran Clone Trooper (and best friend to Ahsoka) Rex may cameo (along with Wolffe and Gregor), should Cassian travel to Seelos to attempt to recruit him. Though still training as a TIE Fighter Pilot, a young Wedge Antilles could potentially be seen in Andor, if the titular Rebel infiltrates Skystrike Academy. Here are the other Star Wars Rebels characters that could potentially show up.

It would be difficult to explain how the protagonists of Rebels would show up in Andor without contradicting any of the first seven episodes of season 1, but any (or all) of the Ghost’s crew could make a surprise appearance. Cassian could see Hera Syndulla or Kanan Jarrus talking to Bail Organa via hologram. He could also pass by Ezra or the entire crew while on a mission to Lothal (similar to Ponda Boba and Dr. Evazan on Jedha).

If episodes of Andor take place before the pilot episode of Rebels, ISB Agent Kallus could be an adversary of Cassian’s. Cassian and Kallus may be on opposite sides of the war, but they’re both spies for their respective factions, and could be portrayed as adversaries with many similarities. Moreover, Kallus eventually defects to the Rebellion, becoming another Rebel spy who uses the codename Fulcrum.

Should Cassian encounter Jedi who survived Order 66, an appearance from the Grand Inquisitor is possible too. This is especially likely, considering Jason Isaacs’ eagerness to reprise his role in live-action. It’s unlikely that Cassian would fight the Pau'an, however, as few non-Force users could survive the encounter, save for Mandalorians or Clone Troopers. Other Inquisitors, such as the Seventh Sister and Fifth Brother, could appear in a similar role.

AP-5 could have a cameo under similar circumstances to Wedge Antilles if Cassian is aboard Imperial Cargo vessel 241. AP-5 was an Imperial droid at the time, but his attitude towards the Empire was apathetic at best and hostile at worst (with the droid eventually joining the Rebels), so he likely wouldn’t be a threat to Cassian. The Rebel spy might even further motivate AP-5 towards his eventual defection.

As one of the earliest members of the Rebellion, Commander Sato could easily be a reoccurring character in Andor, serving as a commanding officer to Cassian. In Rebels, it’s revealed that his homeworld of Mykapo was attacked by the Empire, causing the death of his brother and the formation of Iron Squadron. The attack and Iron Squadron themselves could be part of a story arc in Andor.

The Jablogian crime boss made several appearances in Rebels, working alongside (or trying to kill) the Ghost crew, Lando Calrissian, and Hondo Ohnaka. As a Rebel spy, Cassian may need to work with unscrupulous contacts, and Azmorigan was a powerful figure in the galactic underworld in 5 ABY. Should he appear in Star Wars Andor, Azmorigan could easily be an ally, enemy, or fluctuate between both.

Netflix's Huge Subscriber Loss Is Only The Beginning
About The Author

David Miller is a staff writer for Screen Rant, indie comic writer, and life-long lover of all things Star Wars, Marvel, and DC. He was born and raised in New York and has a degree in English from Rider University. He relates to Peter Parker maybe a little too much.