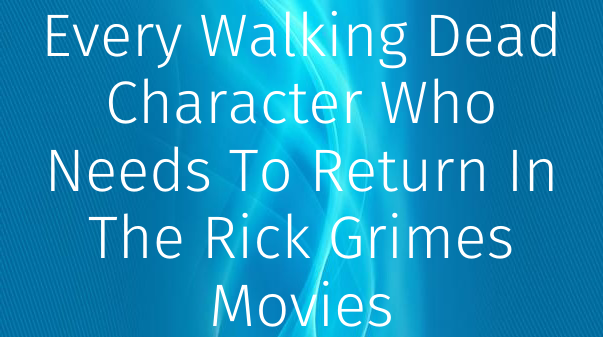 Rick Grimes is set to star in a trilogy of Walking Dead movies, and here are some other characters from the franchise that need to return as well for his journey to be complete. As played by Andrew Lincoln - an actor so convincing as an American that his actually being British has shocked many - Rick served as the central protagonist for the first eight seasons of The Walking Dead. In that time, he led a group of survivors that frequently gained and lost members and went into battle several times against murderous villains.

While Rick and company were forced on several occasions to harden their hearts and do some slaughtering of their enemies for the greater good, Rick's loved ones, namely his children, were able to prevent the former cop from losing his humanity completely. After a protracted war between Rick's alliance and Negan's Saviors, Rick made the surprising choice to let his arch-nemesis live, hoping to set a tone of reconciliation among the remnants of mankind going forward.

This strategy worked for a while, but by the middle of The Walking Dead season 9, Rick ended up sacrificing his life to save his friends and family, or so it appeared to them. In reality, he was saved by Jadis/Anne and a CRM helicopter and will next be seen on the big screen. These movies may well be the last time Rick Grimes ever appears onscreen, but before he says goodbye, he absolutely needs to have some kind of reunion moment with the five characters discussed below. Only then can he find true peace.

While Rick began The Walking Dead married to his wife Lori, who in turn had an affair with Rick's best friend Shane after she believed her husband had died, it was really his unlikely romance with Michonne (Danai Gurira) that became Rick's signature coupling. It took a few seasons for Rick and Michonne's bond to blossom, but they eventually became quite effective parents to Rick's two children, Carl and Judith. That was what made it even sadder that Rick appeared to die during season 9's bridge explosion. Michonne herself exited during The Walking Dead season 10, following evidence pointing to Rick's possible survival. This compelling evidence will presumably lead her to her lost love at some point during the Rick Grimes movie trilogy, and the moment the two reunite will likely cause many tears from the Walking Dead faithful. Especially since Rick has never met their son R.J, who was born after his disappearance.

One of the deepest and most lasting bonds Rick formed over the course of The Walking Dead was with Morgan Jones (Lennie James), who was the first friend he made in the post-apocalypse. After spending time together during the pilot episode, Rick didn't encounter Morgan again until season 3, by which time Morgan had lost his son Duane and began plummeting into insanity. Rick was unable to help him then, but by season 5, a renewed Morgan found Rick at Alexandria and rejoined his friend for several years. Morgan's return came along with a new philosophy that discouraged killing, which led to disagreements, but the two did patch things up. Morgan has been a prominent recurring figure during Rick's journey, and with his knack for being there when Rick needs a helping hand, it would make perfect sense for them to reunite once again in the Walking Dead movies.

While Carl Grimes (Chandler Riggs) sadly died due to a zombie bite he sustained, saving the also now deceased Sadiq during The Walking Dead season 8. Arguably no character had a bigger impact on Rick's development as a person during the post-apocalypse. Keeping Carl safe and healthy was most often Rick's driving force, and when he seemed ready to completely fall apart, it was often Carl that helped bring him back from the brink. This extended to Carl sharing with his father a vision for a future after the Savior war in which even Negan had reformed, leading Rick to spare Negan's life during their final battle, mainly to honor Carl's dying wish for peace. Despite Carl being dead, The Walking Dead has a long history of dead characters appearing in flashbacks, dreams, visions, or hallucinations. For Rick's story to satisfyingly end, he needs to have one more heart-to-heart conversation with his son.

With the possible exception of Morgan, Daryl Dixon (Norman Reedus) became Rick's closest friend over the course of The Walking Dead's run, with the two men coming to see each other as akin to brothers. Rick often looked to Daryl as his right-hand man, a top lieutenant of sorts that he could rely upon to watch over the group and even Rick's family when Rick himself wasn't around. It was telling that when Rick seemingly died in season 9, Daryl refused to accept the idea without proof, spending several years trying desperately to find his friend either alive or dead and never really giving up hope completely. Daryl absolutely needs to find out that his persistence in believing Rick might be alive was correct, leading to a face-to-face reunion between the two fire-forged friends. Even if Rick ultimately doesn't survive his Walking Dead movie trilogy, Daryl needs closure before he can properly move on with his and Carol's spinoff.

The four characters mentioned above all need to reunite with Rick during his trilogy of Walking Dead movies due to close, personal connections they had with him. In Negan's case, his reunion with Rick needs to happen for Rick to see that his decision to let Negan live resulted in a positive outcome. It took a while, and Negan can never be fully forgiven for killing people like Glenn and Abraham but became a full-fledged member of the Walking Dead group that Rick left behind. Carl always had a strangely touching bond with Negan, and Rick seeing that Carl's belief that Negan could be redeemed was correct, would serve to both validate Rick sparing his life and allow Rick to see that Negan's actions have honored Carl's memory. Even if Rick survives his films, he'll never be best friends with Negan, nor should he be. Still, the two former enemies fighting alongside each other would be a truly triumphant testament to the power of second chances.

Michael Kennedy is an avid movie and TV fan that's been working for Screen Rant in various capacities since 2014. In that time, Michael has written over 2000 articles for the site, first working solely as a news writer, then later as a senior writer and associate news editor. Most recently, Michael helped launch Screen Rant's new horror section, and is now the lead staff writer when it comes to all things frightening. A FL native, Michael is passionate about pop culture, and earned an AS degree in film production in 2012. He also loves both Marvel and DC movies, and wishes every superhero fan could just get along. When not writing, Michael enjoys going to concerts, taking in live professional wrestling, and debating pop culture. A long-term member of the Screen Rant family, Michael looks forward to continuing on creating new content for the site for many more years to come.