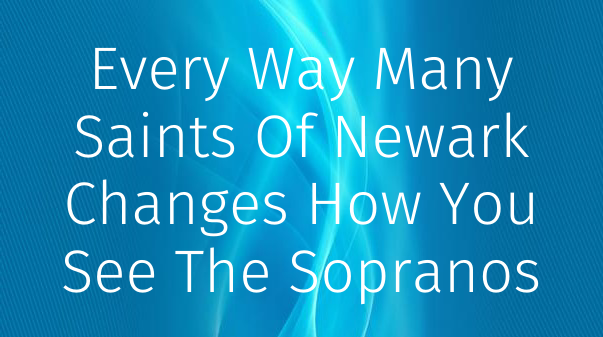 David Chase's prequel The Many Saints of Newark keeps some elements true to the original series, The Sopranos, while modifying and adding others; here's every way the movie actually changes how viewers see the show. While chronicling the life and times of New Jersey mobster Tony Soprano, the HBO crime drama launched the prestige TV movement of the early 2000s. After premiering in 1999, the franchise went on to gain an incredible amount of fans, as well as almost universal recognition as one of the best shows of all time.

Unsurprisingly, TheMany Saints of Newark, was a success for HBO Max since it dropped on October 1st for a month-long streaming run coupled with its theatrical release. However, interestingly enough, the semi-origin story/gangster flick doesn't focus as much on Tony as many fans anticipated. Instead, a much closer look is taken at Tony's "uncle," Dickie Moltisanti (Alessandro Nivola) — the father of Christopher Moltisanti, who was a main character in the original series. The prequel examines Dickie's inner conflict — which is mirrored by other potent violence and tensions (whether they be psychological, personal/crime family-related, or racial in nature) throughout the project.

The film's choice in subject matter certainly isn't foreign territory for the franchise; though Dickie is a slightly surprising protagonist, the series often probes the aforementioned issues. Still, there's a handful of Sopranos retcons in The Many Saints of Newark. Certain elements are more modified, whereas others are totally new to the show's universe. Some of the prequel's content even changes how long-time fans view elements of The Sopranos.

As the prequel's main star, Dickie's character is fleshed out quite a bit. Viewers get to know a lot about what drives him, his inner demons, and even a few painful pieces of his youth throughout the film. Via The Many Saints of Newark, Dickie becomes more than just Christopher's enigmatic father who's referenced and semi-mythologized within The Sopranos. In addition, the audience learns that it's Junior — not Harold (as viewers are initially led to believe) — who's actually the one behind his assassination at the film's end. All of this adds a new layer to his death when it's referenced within the show.

The prequel certainly doesn't end on an uplifting note — albeit one that's darkly fun and hits on major Sopranos nostalgia. After The Many Saints of Newark's credits roll, Tony's story actually seems all the more tragic and doomed. Though it's to be expected to a certain extent, the film paints him as much more innocent and good-natured during his childhood and teen years (the latter version of which is played by Michael Gandolfini) than he is as a grown man on The Sopranos. Despite having family members involved in the mafia — even his own father — youthful Tony shows that there was certainly a chance he could've adopted a less precarious and vicious lifestyle prior to the series' timeline. The movie even heavily implies that, if it wasn't for his own doomed "Uncle" Dickie, he may not have delved into a life of crime at all. Dickie, who he loves and respects (and who seems to be more of a father figure to the young series protagonist than his actual father) really helps him dip his toes into the world of organized crime.

Not only that, but Dickie's searingly painful betrayal — which he never has time to fix before his assassination — and his sudden death toward The Many Saints of Newark's ending are also implied to be the final, emotionally charged events that push Tony towards completely stepping into his eventual identity as a brutal and hardened mobster (and, arguably sociopath). Despite all of the terrible things that he does over the years before The Sopranos' series finale, it's heartbreaking to watch Tony at Holsten's in the prequel while he's waiting for his beloved mentor who will never arrive.

It's no secret that Sopranos fans tend to side with Tony, despite how flawed the series' protagonist is throughout all six seasons. So, naturally, Junior comes off as unlikable when he butts heads with the show's main anti-hero — especially when he uses his conniving ways to try to have him killed. But, even within a movie full of terrible people, Junior's character (Corey Stoll in the prequel) seems even more slimy and self-serving when he has Dickie killed in The Many Saints of Newark. He comes across as even more envious, vindictive, petty, and downright dangerous than he previously did in the original series alone.

Tony's father, who's played by Jon Bernthal in the film, is another Sopranos character who isn't portrayed in a way that many fans anticipated. Aside from being a pretty minor presence overall within the movie, his vicious wrath is something that's only briefly touched upon. In the show, it's eventually revealed to both Tony and viewers that a key factor behind the main character's panic attacks is a triggering psychological connection to traumatizing events from his youth — like when he watched his father and his mob associates cut off a man's finger. In addition, The Sopranos builds Johnny Boy up to be a sort of mythologized mobster figure. At the very beginning of The Sopranos, Tony and Dr. Melfi discuss how his father's era, a sort of "golden age" of organized crime, is on its way out. He holds his father in high regard that way, and both Johnny Boy and Livia — as well as their dysfunction — always seem to be major influences on who Tony is as an adult.

However, in The Many Saints of Newark, Johnny Boy's ferocity and influence on Tony's own criminal development have a surprisingly minimal amount of screen time. He has one shocking and memorable scene in which he suddenly shoots through Livia's beehive hair in the car, but that's pretty much it. Additionally, Tony isn't even there to be affected by the behavior. Johnny Boy also seems relatively tame, as opposed to outraged or even frustrated, in the scene where he returns home to find Tony angrily throwing all of his stolen stereo speakers out of the window. This version of him seems to be a far cry from how his fiery, influential character's legacy is portrayed in The Sopranos.

Christopher Moltisanti Inherits Some Of His Father & Grandfather's Dysfunctional Behavior

Christopher and Adriana's relationship is toxic and messy throughout The Sopranos. In addition to just being a bad pairing, the two characters are extraordinarily troubled people who drag each other down as they spiral. Although Christopher's grandfather, "Hollywood Dick" (Ray Liotta), dies years before he's born, and he's never old enough to know his father while he's alive, The Many Saints of Newark really showcases how his character seems to have inherited their dysfunctional tendencies. Both Dickie and Hollywood Dick have strained, disloyal, and even abusive and violent relationships with the women in their lives. Though Christopher isn't the one who kills Adriana in the show, Dickie's rage-provoked murder of his mistress, Giuseppina, is an eerie act of foreshadowing for how his own son's romantic life will play out.

The Sopranos repeatedly hits on themes involving "family curses" (in both the personal and crime-related sense) of sorts — negative traits, behaviors, and ways of life being passed down from generation to generation. It's only fitting that The Many Saints of Newark shows Christopher's relatives who display certain tendencies, lifestyle choices, and overall violence and rage that he also does in his own adult life years later.

Holsten's will forever be thought of as the diner where Tony sits down for what is, presumably, his last meal. It's where The Sopranos' finale's very last scenes take place before the screen abruptly cuts to black and the show concludes forever. However, Holsten's is also the same diner/ice cream parlor where teenage Tony waits — in vain — for Dickie's arrival in The Many Saints of Newark. After seeing a younger, more innocent iteration of Tony hanging out in the establishment with decades of his life still ahead of him, the prequel makes Holsten's seem a little more layered and close to his heart — as well as slightly less bleak and eerie. Plus, it's a fun, franchise-related "Easter egg" for Sopranos fans.

Lindsey DeRoche is a TV and movie features writer for Screen Rant. She received a BA in English, with a concentration in writing, from Plymouth State University in 2018. She's had a passion for reading, writing, TV, and movies since her early years.