Everything You Need To Know About DC's NEW GODS 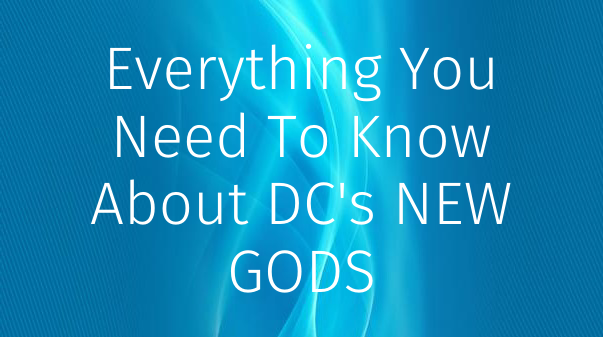 Everything You Need To Know About DC's NEW GODS

The superheroes of DC Comics may be famous, but the richest world DC has to offer is the New Gods of Jack Kirby's Fourth World. While the otherworldly characters, powers, and cosmic conflicts of DC's New Gods aren't exactly common knowledge, it's only a matter of time until they are. Because a New Gods movie is a no-brainer for a studio looking to make their very own Star-Wars-level franchise.

The universe created by comic legend Jack Kirby is as rich, layered, and fantastic as a space opera can get. That's great news for longtime fans of Darkseid, Mister Miracle, Lightray, or Orion - but more than a little intimidating to newcomers. Especially when it's hard to find out where the story truly begins and ends.

To help, we're breaking down Everything You Need To Know About DC's New Gods.

This Page: The Origins of DC's Fourth World

The origin story of the New Gods goes back billions of years into the history of the main DC Comics Universe. Readers don't need to know every bit of it to grasp the modern day events or characters, so for simplicity's sake, we'll do our best to summarize.

Jack Kirby's dream of a cosmic power play between mythological gods and goddesses actually began with a divine realm, known as the "First World." If you're a fan of ancient history and mythology, Kirby's inspirations are obvious enough. The beings of the First World eventually ascended to become Old Gods, thus starting the Second World and taking on the names and style of Norse mythology (Loki, Odin, etc.).

Soon they had their own Ragnarok-scale war that decimated their planet (including its King Yuga Khan), and the remaining lifeforms manifested two new worlds: the planets New Genesis... and Apokolips.

This new status quo was dubbed the Third World, and over time, history repeated itself as the inhabitants also ascended to godhood - and stepped straight into the timeline of the DC Comics Universe every fan knows. These so-called "New Gods" of New Genesis and Apokolips marked the creation of the Fourth World, and a unique blend between ancient deities and modern superheroes.

The New Gods played a direct role on DC's superheroes (the explosion of the Old Gods' Ragnarok created a 'God Wave' that spread the potential for gods and superhumans across the universe) but believe us, there's enough story in their own world to keep fans satisfied. In fact, there's ONE story that drives the rest of the Fourth World for good.

RELATED: 15 Things You Need To Know About Apokolips

It's the story of the respective leaders of each planet. The ruler of the paradise New Genesis, Izaya the Highfather. And the ruler of the fiery hell-world Apokolips, Lord Darkseid. Obviously, the morality play of 'good vs. evil' is obvious in Kirby's version of Heaven and Hell, but it's the truce that the two leaders came to which marks the final piece of the New Gods story.

A bargain that required each ruler to give a son to the other, to raise as their own. And it's those sons who soon became the stars of DC's New Gods universe.

Page 2: New God Characters You Need To Know
1 2
One Naruto Villain Could Destroy Goku (& It Wouldn't Be Close)
About The Author

Screen Rant Editor Andrew Dyce was born in Winnipeg, Manitoba, Canada. Despite calling the vast nothingness of the Canadian prairies home (or perhaps because of it) film and television have been a passion since birth. As a graduate of the University of Manitoba with a degree in English Literature, Andrew has grown to appreciate the story and writing behind everything from blockbuster comic book movies to schlocky B-movie action.