For All Mankind: The 10 Best Characters On The Apple TV+ Show 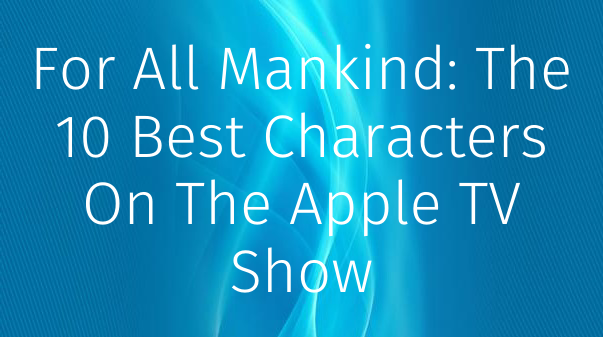 For All Mankind: The 10 Best Characters On The Apple TV+ Show

Those who have watched it weekly seem to agree that For All Mankind is one of the most interesting and creative shows you can find anywhere. The Apple TV+ series focusing on an alternate timeline where the Soviet Union won the Space Race has now spanned multiple decades.

During that time, the core characters have grown and changed in many ways. Some were positive changes and a few were negative but it has added to how complex each of them is. Of course, some characters managed to stand out above the rest in terms of being the best and most intriguing to watch.

At first, Margo Madison might seem like the kind of person who the audience could root for. She was passed over for promotions and often ignored simply because she was a woman. It caused her to become cutthroat as she blackmailed her way into a seat of power.

Once she got that power though, Margo ended up being someone who was willing to do bad things to keep it. She left Aleida in a terrible situation, ordered astronauts to leave Molly to die in space, and puts her job ahead of what's right at times. Thankfully, her relationship with Sergei allowed her to turn the corner a bit.

In season 1, Ed and Karen went through a harrowing ordeal with the tragic death of their son. Season 2 fast-forwarded into the '80s and revealed that the couple had adopted a girl named Kelly who played a major part going forward.

Kelly had to deal with the idea that she was something of a band-aid for her parents' marriage. She also struggled with trying to learn about her birth parents. However, that's part of what made Kelly such a good character. She went out of her way to make things happen for herself like meeting her biological dad and getting into the Naval Academy.

The arc of Aleida Rosales is one of the most unique on the show because she starts out as a kid so when the series jumped ahead in time, it was a totally different actor playing the role. As a kid, Aleida was a bit of a pest but you understood that she was trying to do something with her brilliant mind.

As an adult, Aleida is guarded due to the hardships she has been through. There are times when she makes the audience furious with how stubborn she is but that also allows her the room to grow. By the time season 2 wrapped up, she learned to apologize and was on the road to success.

Karen Baldwin is kind of the opposite of Margo in that she improved over time. In the early episodes, she was the stereotypical housewife of the era and even badmouthed her fellow women when they wanted to go into space. The loss of her son actually managed to change her completely.

Following his death, Karen became more independent. She ended up buying The Outpost and running it before selling it by the end of season 2 and looking for what's next. Alas, cheating on her husband with the son of her best friend was certainly a questionable decision on her part.

The one thing that this show seems to have in abundance is strong female characters. Danielle Poole is right near the top, starting out as one of the few women who becomes an astronaut. While on the moon, she injured herself, sacrificing her reputation to protect her friend Gordo.

Eventually, Danielle found her way back into space and even became the first Black female mission commander. She lost her husband, was held captive for several episodes, and through it all, she came out as the woman who made sure the Apollo-Soyuz project happened.

It could be argued that nobody has a brighter future on the show than Ellen Wilson (neé Waverly). They have teased that she could be on the fast track to making history as the country's first female President. The only thing that might get in her way is if her sexual orientation becomes public knowledge due to the era in which she lives.

Audiences were hooked watching her romance with Pam Horton and they loved seeing her step up as an important astronaut. Ellen's continued growth professionally is huge for all women in the country and the complexities of her personal life make her as interesting as they come.

Tracy Stevens managed to really have an up-and-down run on the series. She started out as the typical housewife being cheated on by her astronaut husband but she proved her toughness when she became an astronaut herself. Tracy was also a great friend to Karen in her time of need.

Season 2 showed that Tracy had become something of a celebrity and let it get to her head at times. Still, she remained a good mother to her children. Tracy got a rude awakening at Jamestown, struggling at first but overcoming it to become a valuable team member who ultimately sacrificed herself to save everyone.

When the series began, Ed Baldwin seemed like the protagonist. Most of the show centered around him and that worked because he's an interesting character. Ed is the quintessential star astronaut who played a pivotal role in getting Jamestown up and running.

He also showed that he was a good leader with his role as the Chief of the Astronaut Office and remained a good father to his son and eventually to Kelly as well. Ed is loyal to those he cares about, has a marriage that is intriguing to watch, and is great at what he does.

It's near impossible to dislike Molly Cobb. She has almost everything going for her to be one of the show's top characters. When she's first seen, she's a badass woman who takes no grief from anyone and is arguably the top female astronaut candidate.

Over time, she formed entertaining bonds with various characters from Ed to Tracy, and her marriage to Wayne is delightful. They balance each other out in a way that no other couple does. Plus, Molly is a true hero, risking her life for others on several occasions.

Gordo Stevens is the ultimate character who benefitted from the show spanning such a long period. He started as a cocky astronaut who didn't value his wife and children. However, the things he went through while at Jamestown Base proved to be a turning point for him.

He became a great and sympathetic character in season 2, dealing with the trauma of what happened while becoming a better father and overall person. Gordo overcame his fears and made it back to Jamestown Base, where he sacrificed his life to save everyone. It was also easy to cheer for him in his attempts to win Tracy back.

NextWhich Resident Evil Villain Would You Be Based On Your Zodiac Sign?
About The Author
Kevin Pantoja (634 Articles Published)

Born in New York City, Kevin eventually went on to attain his Bachelor's Degree in Creative Writing for Entertainment at Full Sail University as Valedictorian. He has written in the past for various websites covering movies, TV, pop culture, sports, and wrestling. You can always find him on his Twitter, @the_kevstaaa.