Freddy vs. Jason Writers Use Godzilla vs. Kong To Mock Friday 13th Backlash 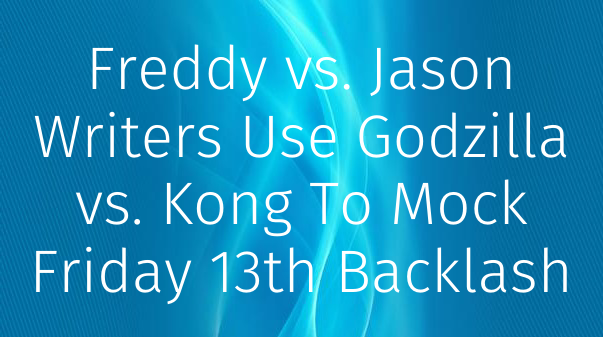 Freddy vs. Jason Writers Use Godzilla vs. Kong To Mock Friday 13th Backlash

The writers behind Freddy vs. Jason have used a clip from the recently released Godzilla vs. Kong trailer to mock the backlash they received for their “vs.” movie more than 17 years ago. Writers Mark Swift and Damian Shannon are the minds behind the crossover movie that combined Friday the 13th and Nightmare on Elm Street in 2003. The screenwriters also created the script for the 2009 reboot of Friday the 13th.

The “character versus character” movie concept has been a long-used strategy for studios to get more viewers into the theater, and Godzilla vs. Kong is no exception. Warner Bros. released a trailer for the King Kong and Godzilla crossover earlier this week, and the fan reaction was one of excitement and anticipation. However, Swift and Shannon noticed a similarity to Freddy vs. Jason in the trailer they were quick to comment on.

A few days ago, the screenwriters posted a screenshot from the Godzilla vs. Kong trailer on their joint Twitter account, with the caption, “If you watched the previous movies, you’d know that Kong was never afraid of water before this is bullshit.” This tweet seems to be referencing the most common complaint about Freddy vs. Jason giving Jason a “fear of water” that fans claim does not make sense for the character. Swift and Shannon are mimicking this argument in their tweet to point out the ridiculousness of the statement. King Kong does not have a sudden new fear of water, but then, Swift and Shannon would argue, neither does Jason.

If you watched the previous movies you’d know that Kong was never afraid of water before this is bullshit pic.twitter.com/owo2vXiJu4

The point the screenwriters are making with this Godzilla vs. Kong tweet is that it is silly for fans to pick at these minor plot contrivances. It has been pointed out that Jason’s apparent “fear of water” in Freddy vs. Jason is not a fear of water at all, but rather a very traumatic memory of drowning that he re-experiences in specific circumstances. Taking the plot elements out of context ignores the larger narrative purpose of the screenwriters’ decision and ignores the actual problems Freddy vs. Jason has.

Similarly, Swift and Shannon have taken this clip from Godzilla vs. Kong out of context to show how fans can create “plot holes” that are not there. The writers are also probably tired of Freddy vs. Jason being made fun of and want to have some fun at their fans' expense. Hopefully, Godzilla vs. Kong will not attract the same level of scrutiny that Freddy vs. Jason did.

KJ Minzner is a television news writer who has previously written for MXDWN.com, and currently contributes to ScreenRant's entertainment news coverage. They've moved from LA to New Zealand and back again, but they are currently based in Cincinnati, Ohio. A graduate of Chapman University's TV Writing and Production program, they spend their free time writing Dungeons & Dragons adventures, editing comedy podcasts, and playing Animal Crossing.