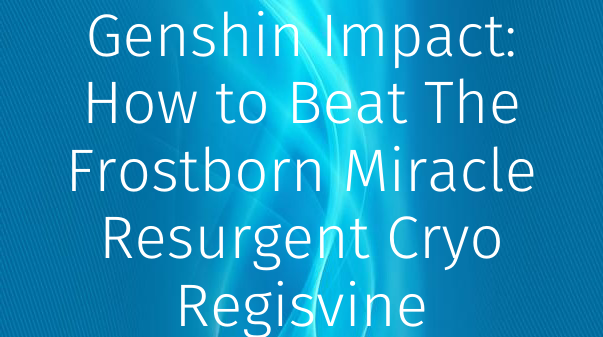 There is always something to do throughout the world of Genshin Impact. Players are able to explore the massive environments available to them, all the while speaking to NPCs, acquiring different resources, and even completing a wide array of different quests. As time has gone on the game has continued to receive new updates that have now provided players with brand new areas of the map to explore as well as new enemies to fight against.

The newest update to the game added the Dragonspine region, and with that has come many difficult to dispatch bad guys. One such enemy is the Frostborn Miracle Resurgent Cryo Regisvine, which is not only hard to say but hard to defeat as well. Players who don't pay attention to the things going on around them or think they can just tank the Regisvine's hits will get themselves killed very quickly. This guide shows players how to defeat the Frostborn Miracle Resurgent Cryo Regisvine.

First things first players will need to make sure they are prepared for this fight before starting it. Those who have a friend to play with may want to consider taking this fight on in co-op due to the sheer power the Cryo Regisvine can bring to the table. This guide has been designed with single players in mind though, and it is very much possible to bring this creature down without a buddy. The player will need to ensure that they bring a few different kinds of characters into this battle to make things simpler.

At least two Pyro users will be an absolute necessity. Since the Frostborn Miracle Resurgent Cryo Regisvine is made of ice, Pyro damage will perform very well against it. Players will want to bring their absolute strongest melee Pyro character with them, but will also want to have Amber in their party. She may be one of the weaker Pyros, but Amber's ranged attacks will be perfect for dealing damage while avoiding the Regisvine's counterattacks.  A good healing character should also be brought along as well since this enemy can dish out massive amounts of damage against even high leveled characters.

On top of this players absolutely need to ensure that all of their characters are carrying the best possible weapons and gear, and that each of them are as leveled up as physically possible. It is a great idea to cook up some dishes before this fight that can boost things like damage or defense capabilities, as players will probably want every single advantage that they can get. Once this is all done players should then be ready to engage the Frostborn Miracle Resurgent Cryo Regisvine.

When this fight begins the Frostborn Miracle Resurgent Cryo Regisvine will spawn right in front of the player surrounded by an ice shield and a ten-minute timer will start counting down. This fight will need to be completed within ten minutes, but players don't want to rush or they will risk taking unnecessary damage. Right after the Regisvine spawns though it will summon a large amount of Ice Slimes. Players will want to start running away immediately though rather than attacking the slimes because the Regisvine will send icicles out to damage the player. These icicles have the potential to kill the player almost immediately, so the best idea is to run away and wait for them to disappear before going after the slimes. The last thing that the player wants is a complete team wipe in the first few moments of this boss fight because they got careless.

Once the icicles have gone away the player should then begin working on clearing out all of the nearby slimes around them. Once they all have been eliminated a Scarlet Quartz will spawn, which the player can destroy in order to obtain the power to destroy frost crystals. There are three of these crystals in the room and they are what is maintaining the shield surrounding the Regisvine. After destroying a crystal, more slimes will appear that need to be taken out to spawn another Scarlet Quartz. The player will just need to keep up this strategy until they have destroyed all three frost crystals and removed the Regisvine's Ice shield. Once the shield goes down it will stay down and the player can now begin dealing damage to the monster.

With the shield down the player will now see that the Frostborn Miracle Resurgent Cryo Regisvine has an ice core just like the standard version of the Cryo Regisvine. Players will need to deal damage to this core in order to stun the creature and therefore be able to chip away at its health bar. During this part of the fight the Regisvine will use a slamming attack as well as lasers to try and harm the player. If the creature begins to shake then it will slam the ground and if it throws its arms out then it will be about to fire lasers at the player. Keep an eye out to avoid these attacks entirely as a melee attacker, but if players brought Amber they shouldn't have many issues dodging these attacks from afar.

After stunning the Frostborn Miracle Resurgent Cryo Regisvine for the first time and dishing out damage it will then get back up and spin in a circle to attack the player. This can be dodged, but it will then spawn ice crystals in the surrounding area. The player will want to rush at these and attack them as quickly as possible. By breaking an ice crystal an energy bubble will appear that the player will then need to stand inside. If the player isn't fast enough then the Regisvine will unleash a powerful ice attack that covers the entire arena. If the player is not within the bubble when this attack is unleashed then they will be killed instantly. After this go back to attacking the core like normal.

After stunning the Regisvine for the second time it will then summon Cryo Whopperflower enemies instead of the insta-kill ice attack. It will do the exact same icicle attack from the beginning of the fight, so players will want to avoid that before dispatching all of the Whopperflowers. From here the Regisvines attack patterns will repeat from the post-ice shield portion on. Players will just need to keep avoiding the Frostborn Miracle Resurgent Cryo Regisvine highly powerful attacks and attacking when they have an opening to eventually bring the beast down.

Once they have finally killed it the player will then be teleported out of the Cryo Regisvine's arena and plopped down next to a chest. This chest will contain all of the rewards for the player's troubles, and more than make up for the effort exerted against the Cryo Regisvine. Those who want to can complete this fight as many times as they wish before the event is over, and farm all of the rewards that the Regisvine provides for them.

Genshin Impact can be played on PlayStation 4, Nintendo Switch, PC, iOS, and Android.

Cody Peterson is an avid reader and writer. Graduated from Midwestern State University with a BA in English where he worked as an editor for the University literary journal. Currently a freelancer for Screenrant, where he spends most of his time writing guides or reviews. Be warned that any conversation started with him will probably wind up gravitating towards his two dogs, The Adventure Zone, or Kingdom Hearts 2.