Gilmore Girls - A Year In The Life: 10 Most Romantic Quotes 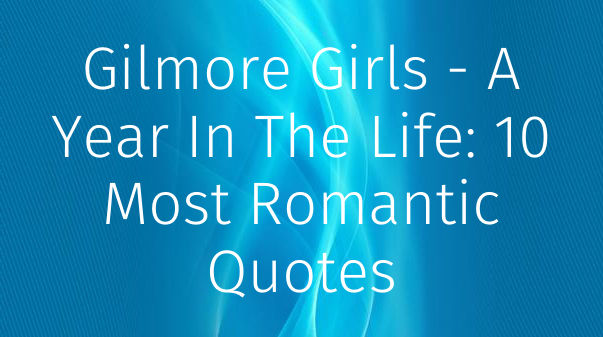 Gilmore Girls - A Year In The Life: 10 Most Romantic Quotes

Gilmore Girls - A Year in The Life brought back to life the beautiful town of Stars Hollow and the wonderful people there. Lorelai and Luke are still together when the miniseries starts, and Rory seemed to be involved with an engaged Logan, while Emily had lost the love of her life. There was ample romance in the miniseries in between all the family drama and soul searching.

There were three main romance angles throughout the miniseries. Lorelai and Luke are one of those couples that are beloved in television history. Fans have rooted for them from the very beginning and they have quite the dramatic arc over the miniseries. Rory and Logan represented the confused modern millennial complicated relationship. And Emily, learning to live life again without her husband completed the whole thing. Here are some of the most romantic moments from the show.

Some fans of the show decidedly love Logan and think he is the best boyfriend Rory had. To see them back together on the screen being cute with each other fulfilled the dreams of these fans. This is one of those cute moments when they seem very comfortable with each other and Rory asks Logan not to leave. They are very affectionate with each other, and it comes across very clearly here.

9 "One Thing I Can Honestly Say, I've Never Been Bored With You."

Logan always pulls out the big guns for Rory. He plans these big adventures and big moments that sweep her off her feet. From their very first adventure as part of the Life and Death Brigade to the very last musical adventure he takes her on with them ending up in New Hampshire, every interaction proves this fact. And that's why Rory means it when she says that she's never been bored with him. Whenever Logan is around, he keeps her entertained, and keeps her occupied, and gets her to enjoy life in a way she normally wouldn't.

8 "Where's Your Room? Right Across From Yours. Show Me."

On their last night together, Logan takes the precaution of getting Rory another room because he doesn't know where the both of them are, in terms of their relationship. But Rory takes the lead that night knowing that it was probably going to be her last with him.

She decides to end their romantic relationship on that high, knowing that from the next day, she had to start to learn to not rely on Logan to help her out.

When Logan says that he'll drop her back in the morning after their fun escapade, Rory says this line. It is a bittersweet romantic moment wherein they both acknowledge that their romantic relationship has to come to an end. That this was probably the last time for them. That this was the last time they could be around each other in this manner. This is the moment when Rory decides to take a step back from Logan, knowing that it is wiser in the long run. But for fans of Rory and Logan, this ending moment of their relationship would have been pretty sad.

6 "This Right Here Is All I Will Ever Need."

Luke doesn't want much from life. He's gotten mostly everything he's ever wanted. Never in his wildest dreams did he think that he'd be able to be with Lorelai, and that happened to him. So he says very definitely that this is all he's ever wanted and needed. That she's all he has ever wanted or needed. And as much as Lorelai thinks that he's sacrificing something for her, or that maybe he wants more, he really doesn't. It is so endearing how all Luke needs is Lorelai, and nothing else.

5 "You Should Find My Bedtime Rituals Endearing By Now. What's Taking You So Long?"

One of the cutest lines from the miniseries. It's quite nice for fans of Luke and Lorelai to see them in a thoroughly domestic setting making snarky comments filled with affection.

Lorelai is very particular about her things, and she makes a fuss about it. When Luke mumbles back his reply, Lorelai says this line which is quite adorable because Luke already does find everything she does quite endearing.

The full quote is: "I'll give you back the entire closet. I only took that half because you insisted I do it... You need it! You need the space, and I need you."

Only Gilmore Girls can make romance out of wardrobe space. Luke tries to convince Lorelai that he's not unhappy or unsatisfied. He's very happy with his life, he's very satisfied with everything he's gotten. And the only thing he's worried about is her leaving him. That's the only thing he can't handle. He's ready to change for her, fix anything, just to make sure she stays because she's the only person he needs.

3 "I Think We Should Get Married."

After Luke's incredibly dramatic monologue that ensued after he thought Lorelai was going to leave him, Lorelai manages to shut him up by saying the very opposite of what he thought was coming his way. She tells him that she wants them to get married, and that she's picked a date, and that everything is decided. He just rushes to get the ring and they were engaged again, just like that. It was the best romantic moment in all of the miniseries.

This is one of the sadder romantic quotes from the show. Emily and Richard were married for 50 years. Theirs was a strong partnership, that despite its ups and downs, not just survived, but thrived.

Emily had lived most of her life with Richard and she loved him so much that the prospect of living without him was too much for her. She didn't know how to continue with her life when half of her was gone.

1 "Just Got To Tell Ya Before This Thing Goes On, You Got To Realize The Only Way Out Is In A Body Bag."

In typical Gilmore Girls fashion, even the most dramatic of moments is cut by an incredibly cute yet cheeky line like this one. In reply to this line, Lorelai adds very sweetly, "Now we don't have to write our vows." Luke cannot imagine a life without Lorelai, and he's made it very evident that Lorelai is the only thing that matters to him. And Lorelai too has understood after a lot of soul searching that she wants that sort of partnership as well. So before the ring goes on, Luke says in his own humorous way that the only way they're getting out of this relationship is when they die.

NextThe 9 Best Recasts In Movie History, According To Reddit
About The Author
Vandana Devi (137 Articles Published)

Vandana is a twenty-something student from Kerala studying in Chennai, India pursuing her Masters in English Studies. She prefers writing because she's no good at the talking business. You can read some of her other rants at : http://wheneverhoweverwhatever.blogspot.com