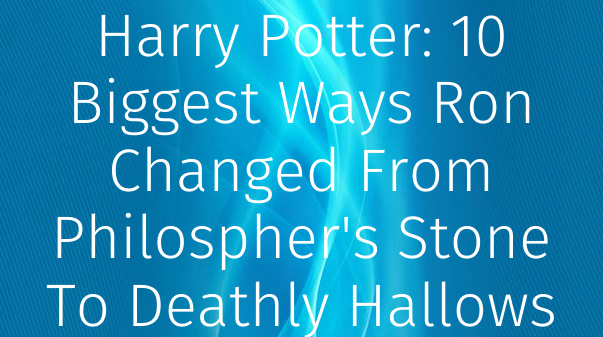 Ron Weasley is one of the greatest characters within the Harry Potter world, as one of the lead roles in all of the films he is someone who has great importance throughout. He provides a lot of comic relief throughout the films, but that certainly isn't all that he's good for.

Ron is loving, kind, and incredibly loyal from the start, but there are many of his traits that he improves throughout the journey. Of course, as he goes from boy to man, he ends up learning many different things and he quickly grows as a person and a wizard.

While not everything changes in a positive manner, he certainly does grow and become a man throughout the films, which is fantastic to see. Here are ten ways that Ron Weasley changed from Philosopher's Stone to the Deathly Hallows.

This is one of the best changes that could possibly happen to someone and it is certainly attached to simply just growing up as a man. However, there is no doubt that his confidence, both in performing spells and just generally in life, improves immensely throughout.

It improves him so much as a character throughout the films as it is obvious just how much he grows. Towards the final few movies, Ron is just as confident as some of the stronger personalities in the series, which makes him an amazing character.

Perhaps this is because his confidence grew as a person, but as the films developed Ron Weasley certainly became happier to have an argument with people, including his own friends. This might be seen as a bad thing to some, and to a degree it is, but it also showcases his growth.

Ron stops being happy to just go along with everything and be the one to cheer people up with jokes and grows more of a backbone. While he very rarely gets nasty, there are moments where he does argue and that highlights that sometimes he wants to have his voice heard.

Perhaps like most children just starting out in school, Ron Weasley is initially a little embarrassed by being a member of the Weasley clan. Because the family is seen as poor and he is often given hand-me-down clothes or homemade presents, he does seem to shy away from talking about his family.

However, as the story develops he grows to see just how strong his family are. Each member of the Weasley family is incredibly strong and they play a big part in battling the dark side of the magical world, which is something that Ron begins to embrace and become proud of.

Throughout the first few movies, Ron Weasley is almost scared of his own shadow. There is nothing that comes up that Ron is confident about. While he has to fight against that, he certainly shows great fear against the Cave Troll, or the spiders, for example.

However, this fear begins to boil away as he grows up. This is probably down to the fact that he comes up against so many horrors throughout his life. But by the time it comes to staring at Lord Voldemort, or being chased by Nagini, Ron no longer trembles in fear as he once did.

Something that certainly improves throughout the series is Ron Weasley's ability to fight against others in duels. Early on in the series, he isn't great at this element of the Wizarding World, which could have caused him problems as things develop.

However, he quickly gets to grips with the situation and does improve in this regard drastically. Without the improvements, Ron would likely have died due to the situations he ends up in, so it's incredibly impressive that he develops so much.

Out of the main characters, Ron Weasley is the comedic relief of the movie. He cracks up with some brilliant one-liners and is quite goofy early on, but as the story progresses and the situation becomes more serious, that comedy begins to fade away.

Granted, the situation he is living in is far less funny than when the series first begins, but he does still bring a few bits of comedy. It proves he still has his funny bones, but he doesn't do it as often, proving how much the situation has changed him.

Another way that Ron Weasley changes throughout the Harry Potter movies is the fact that he becomes far more independent. He is able to stand up for himself and becomes far less reliant on Harry and Hermione or any of his family as he does at the beginning.

This is clear when he actually leaves Harry and Hermione as they search for the Horcruxes. Despite being hunted down, Ron manages to stand on his own two feet, eventually making his way back to his friends to help them out once more.

Something that perhaps flies under the radar for most people (pun, very much intended,) is Ron Weasley's skills on a broomstick. It's not something that is really a featured plot point in the same way it is for Harry Potter, but Ron does massively improve on the broomstick.

During the initial flying lesson in Harry Potter And The Philosopher's Stone, Ron struggles to even command the broom to come to his hand. However, Ron ends up becoming a keeper in the Gryffindor Quidditch Team and flys with confidence at several points in the film.

To be fair to Ron, this is a change that most teenagers go through, in both the Wizarding and non-Wizarding Worlds. But if you compare his first meeting with Hermione Granger to how he is with her at the end of the series, it's very clear his stance on romance changes.

At the start, Ron is happy enough to put up with Hermione, but he just sees her as a loner. However, his love for her grows as the movies progress and it shows how much Ron develops as a man throughout the show.

Let's face it, at the start of the Harry Potter series, Ron Weasley isn't a particularly great wizard. While he certainly tries hard he doesn't come close to have the skills that his best friends do. He struggles with basic spells and doesn't even know many of them, despite being from a wizarding family.

However, by the time Deathly Hallows rolls around, Ron has picked up some serious skill. He's not only a great fighter, as we previously mentioned. But he is able to pull off a variety of other spells in order to help their quest, which really helps throughout.

NextFantastic Beasts: The 8 Best Easter Eggs & References To The Harry Potter Series In The Secrets Of Dumbledore
About The Author
Matthew Wilkinson (968 Articles Published)

Matthew Wilkinson is a Senior Writer with Screen Rant and has been part of the team since 2019. In addition to his work as Screen Rant, Matthew is also a writer of pieces at The Sportster. Matthew has a major passion for movies and television, enjoying a variety of genres from animation and horror to fantasy and thrillers.