How Did Darkseid Forget Where The Anti-Life Equation Was? 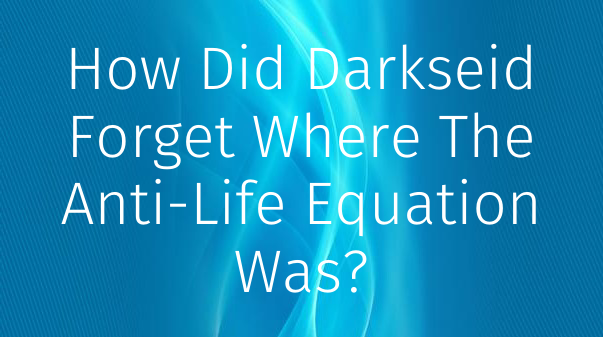 How Did Darkseid Forget Where The Anti-Life Equation Was?

Zack Snyder'sJustice League never clearly addresses how Darkseid forgets on which planet the Anti-Life Equation is on. Because of Superman's death, his screams awaken the Mother Boxes and draw Steppenwolf to Earth. And it's history of the three Mother Boxes which sets the Snyder Cut's plot in motion. As Wonder Woman (Gal Gadot) explains to Batman about the ancient war with Apokolips, the Mother Boxes are "indestructible, living machines," which can be combined to create the Unity.

The Unity allows Darkseid (voiced by Ray Porter) to cleanse a planet with fire and rebuild a new one in his image, terraforming it to be like Apokolips and control all the surviving inhabitants as parademons. All of this makes sense, but after being thwarted in his attempt to conquer Earth, a young Darkseid leaves the planet and forgets the location of the Anti-Life Equation, the mathematical equation which is the "key to controlling all life and all will throughout the multiverse." He knew this from his first trip, when Earth's different factions united to stop him from conquering it. But strangely, despite the Mother Boxes being left behind and Darkseid knowing the Anti-Life Equation was on the same planet, he forgot where it was.

There is the possibility that Darkseid doesn't exactly remember the ending of the battle when he left the Mother Boxes behind. After all, he was almost killed by Ares and was then dragged back aboard his ship. In addition, Earth was the only planet that Darkseid hadn't been able to conquer, and the exact location could have been, as Wonder Woman says, "anonymous among a trillion worlds," along with the now-sleeping Mother Boxes. He could have forgotten the exact location until the boxes revealed the Equation's location to Steppenwolf later. In a similar train of thought, it would be like someone visiting one of the thousands of islands in the Pacific Ocean and trying to find it again decades later.

Darkseid says he's conquered 100,000 worlds and DeSaad tells Steppenwolf that he needs to bring 50,000 more worlds to heel before he can return home. Going based on that, unless it was tracked somewhere, it stands to reason neither of them would remember one planet out of thousands. However, the caveat there is that DeSaad says the rebellion of the primitive world - Earth - is legendary, so if the story is something everyone knows, then not knowing which planet it was is strange. But then again, Earth isn't the primitive world it once was; the planet changed over time.

These are all certainly possibilities, and the answers to the seeming plot hole could be that simple. Still, it seems strange that, in a film with far more context than Joss Whedon's 2017 version, this piece of plot-relevant information was more implied than explicitly stated or shown. But, even so, Zack Synder's Justice League certainly fleshes out an impressive litany of concepts and backstories, even by four-hour-long standards - and with his very own style.

Lindsey DeRoche is a TV and movie features writer for Screen Rant. She received a BA in English, with a concentration in writing, from Plymouth State University in 2018. She's had a passion for reading, writing, TV, and movies since her early years.