I'm Thinking Of Ending Things: How The Movie Compares To The Book 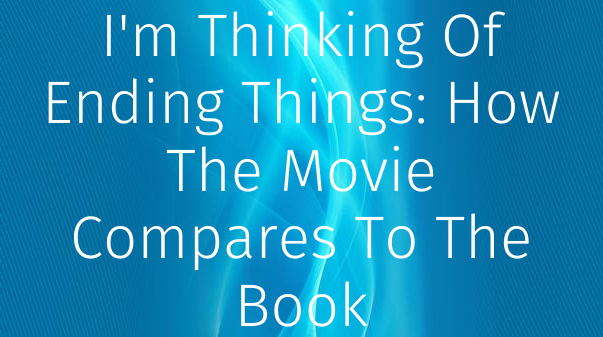 I'm Thinking Of Ending Things: How The Movie Compares To The Book

I’m Thinking Of Ending Things, directed by Charlie Kaufman, is adapted from Iain Reid’s 2016 novel of the same name, but how much of the movie is different from the book? It is not uncommon for a novel, video game, or comic book to transform into a feature-length film but, oftentimes, the contents of the original source are lost. In I’m Thinking Of Ending Things, Kaufman takes as much from the source material as possible.

Starring Jesse Plemons as Jake and Jessie Buckley as his girlfriend, the film follows the couple as they travel to his parents’ farm to introduce his new love interest to his mother and father. Toni Collette and David Thewlis portray Suzie and Dean, who take on various ages throughout the first hour of the movie. While Kaufman sets up the perfect story of a couple on the brink of parting ways, it is actually a precursor to the journey through Jake’s psyche as it begins to collapse. It shares a similar theme with the director’s famous film, Eternal Sunshine Of The Spotless Mind, in which both leads are faced with their own unique internal battles with love, family, and the self.

I’m Thinking Of Ending Things takes on the task of detailing a horrific and existential story that questions the reasoning behind every aspect of life. While full-length novels can expand for hundreds of pages, films have limitations to their length, which causes an array of scenes and themes to be left out in the final product. This is not the case with Kaufman’s film. It is one of the most accurate adaptations, but there are some major differences between Iain Reid’s original story and Kaufman’s film.

How The Characters In The Film Compare To The Novel

The entirety of Iain Reid’s novel is told from the perspective of Jake’s girlfriend, who remains unnamed from beginning to end. She enters the story knowing their relationship is doomed to fail, and acknowledges the fact that she is “thinking of ending things.” While the young woman is the primary narrator, all she talks about is Jake, his behaviors, previous relationships, and everything in between. In Kaufman’s film, she has the initial narration introduced at the beginning of the novel where she details why she wants to end the relationship, but it stops there.

For the rest of the film, the young woman – who Kaufman names Lucia, Louisa, and Lucy – becomes everything Jake has ever aspired to be, and the woman he has always wanted in every variation imaginable. While Jake’s parents are a crucial part of the film, they play a much smaller role in the novel. The initial descent into madness begins on the family farm, but there are minimal interactions between the four characters. In Reid’s story, the young woman appears as an unquestionable character. There is no reason to believe that she is not a real person, while Kaufman immediately makes the viewer question it. The characters are likely different in the movie due to the fact that the internal monologue of the young woman and her narration would not translate well.

What I'm Thinking Of Ending Things Movie Version Leaves Out & Why

As Reid’s I’m Thinking Of Ending Things expands in the early pages, the young woman discusses the bizarre occurrence of the phone calls that Kaufman never explains. In fact, she states that the phone calls are coming from her number but the person calling isn’t her and they’re leaving voicemails in a man’s voice with cryptic messages. There is a brief instance where a snippet of the voicemail is present in the film. It is likely the voicemails are not included due to the fact that they would’ve given away the big reveal from the ending.

Another crucial element left out are the side conversations that interrupt the young woman’s narration. Numerous unknown people are discussing one individual who has died while questioning if the person took their own life or if they were sick. They expand on this unknown man who is “Not like us at all” and “wasn’t a rational person”. If included in the film, these brief conversations would have revealed that Jake was thinking of ending things, and that he ultimately took his own life. In death, these moments reveal how he was perceived and how alone he truly was. It could have built more sympathy for Jake had Kaufman included them, but the book reveals too much, too soon.

The Major Differences Between The Two Endings

Kaufman’s ending is a grandiose explanation for the deterioration of Jake’s internal well-being. It introduces themes of wanting to be recognized for achievements, the desire to be wanted, the need to be needed, and how he never was able to achieve his desires. He's the janitor who walks the halls and cries as he sees the young woman, who explains who she truly is: a stranger. Jake doesn’t like himself, and doesn't want to continue living. Kaufman gifts the self-loathing character with the opportunity to be literally awarded with all he’s ever wanted. It is a satisfactory end to a story that was never meant to see Jake reach this level of closure and acceptance.

The book's ending does not provide thorough answers as to what is real and what is imagined. In fact, it concludes with the young woman stabbing herself in the neck. In this moment, reality breaks through and reveals that the narrator is Jake, who has just killed himself. Upon discovering diaries and journals, the unknown people who interrupt the novel throughout its entirety discuss that he wrote the story and dreamt up the characters. They appear to be people who once knew him as they discuss the fact that he grew increasingly disturbed with age. In Kaufman’s film, no one discovers Jake; he remains alone in the film to the very end.

Kaufman and Reid’s endings could not be more different. It is likely that the director took the route he did in order to create nuance without the difficulties of presenting a horrific scene where Jake takes his own life. It is a sensitive subject that often doesn't translate well to movies and TV shows, as seen with all the controversy in 13 Reasons Why. In the novel, there is no musical number, no dancers, and no closure, but Kaufman provides this all in the film. Ultimately, each storyteller of I’m Thinking Of Ending Things took the route necessary in order to capture the psychological torment that Jake had internalized for over thirty years.

What Debbie Is Up To After 90 Day: The Single Life
About The Author
Mara Bachman (568 Articles Published)