Is It OK To Watch Shang-Chi But No Other Marvel Movies? 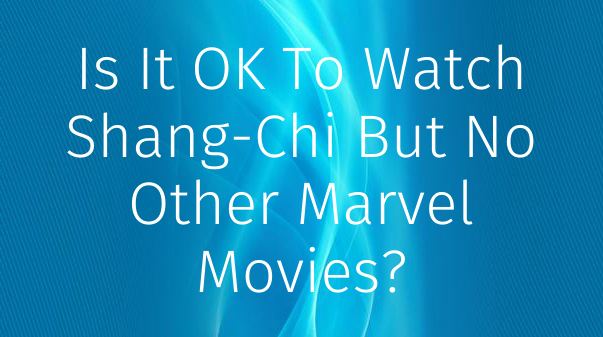 Is It OK To Watch Shang-Chi But No Other Marvel Movies?

With Shang-Chi and the Legend of the Ten Rings hitting cinemas, the question of how it ties into the rest of the MCU is no doubt a big consideration for potential audience members. More than a decade into the Marvel Cinematic Universe, the requirement to watch every movie prior to a new release can, of course, feel daunting. Shang-Chi, after all, is the 25th cinematic release in the series built on Robert Downey Jr's broad Iron Man shoulders. That's a lot of lore.

Were the original plans for Shang-Chi in the MCU delivered on, the martial arts expert would have been part of a completely different Phase One. By now, the hero could have appeared in four Avengers movies, surviving Thanos' snap along with the other Original Avengers and using his not inconsiderable powers to help take down the Mad Titan's armies. The history of the Ten Rings would be different, the line-up of heroes in Phase 4 would arguably be far removed from their current reality and Shang-Chi would be a veteran, possibly heading out of the MCU.

The good news for fans who are excited to see Shang-Chi and haven't seen all of the movies he may have been involved in in an alternate MCU timeline, is that Destin Daniel Cretton's movie does not require a huge knowledge of past MCU movies. There are, inevitably, ties to other Marvel movies, including in the form of cameos like those of Doctor Strange's Wong (Benedict Wong) and The Incredible Hulk's Abomination (Tim Roth), but they do not require expertise in existing lore. One sub-plot does tie back to a Phase 2 movie in quite a big way, but not in a way that compromises the experience for anyone who hasn't seen that particular Phase 2 release.

In other words, Shang-Chi works as a stand-alone movie. It's not necessarily the kind of MCU project where you'd constantly ask where the other Avengers are and why they haven't turned up to help, because of that narrative removal. And it is an inspired move because asking the audience for that sort of commitment to the lore will be an increasing burden that weighs down future MCU movie projects (unless they're sequels). Already, there's a nostalgic view of Iron Man and the other Phase 1 movies that will be startling for Marvel fans of a certain age, but that's how audiences shift. The fans who watch the X-Men debut in Phase 5, or the inevitable coming of Galactus may well see Iron Man as just the guy who appears in the old Marvel logo idents. Unless of course the multiverse finds a way to recast him entirely.

Shang-Chi and the Legend of the Ten Rings can be enjoyed almost entirely without a full MCU movie rewatch. If you're going to, then there are a selection of movies you should watch for the sake of continuity. The already established Ten Rings timeline from Iron Man through to Iron Man 3 (and arguably Ant-Man) works well as background information, and both Doctor Strange and The Incredible Hulk would be somewhat advantageous to explain who Wong and Abomination are, but unlike the rest of Phase 4 so far, Shang-Chi isn't so much an Endgame fallout movie as it is a post-Infinity Saga one.

Simon is a veteran editor who has been writing online since 2010 - long before anyone wanted to read his work. He loves Clueless. Like, a lot.