Is My Hero Academia On Netflix? 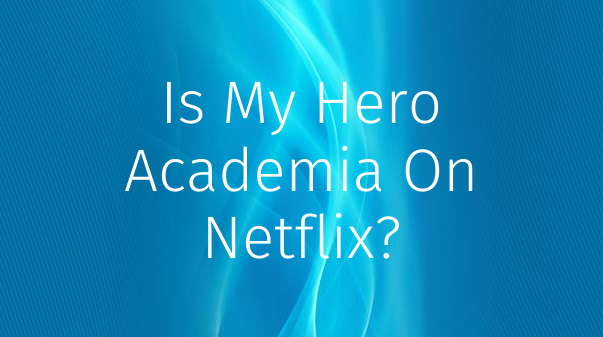 Is My Hero Academia On Netflix?

Is cult anime series My Hero Academia available to stream on Netflix in the U.S.? My Hero Academia is based on the manga series by author Kohei Horikoshi. The anime adaptation debuted in 2015 and takes place in a world where superpowers exist, which are called Quirks. The lead character is a young boy named Izuku Midoriya who wants to train to become a hero despite not having any powers to speak of. Izuku soon finds himself taken under the wing of Japan's top hero, who sees the potential in him.

The show is both a tribute to - and slight parody of - American superhero comics and movies, and the franchise is now so popular it was used to help promote Avengers: Endgame in Japan. The My Hero Academia anime has proven to be a wild success and will return for a fourth season in Fall 2019. The series also spawned a spinoff movie dubbed My Hero Academia: Two Heroes, which takes place between the events of season 2 and 3. The franchise is continuing to expand, with Legendary Pictures (Pokémon Detective Pikachu) set to turn My Hero Academia into a live-action movie, though no directors are currently attached to the project.

With the fanbase for the series growing larger each year, newcomers might be wondering if My Hero Academia is currently streaming on Netflix in the U.S. Unfortunately for subscribers to the streaming giant, the show isn't currently available on the platform. It appears unlikely that will change anytime in the near future, with Hulu and Funimation having recently come to a licensing deal that will see them as the only platforms in the U.S. to stream both subbed and dubbed versions of shows like Attack On Titan or My Hero Academia.

For those who want to check out My Hero Academia, either Hulu or Funimation appear to be the best bets currently. While Netflix may not have the series, the platform is doing its best to cater to its anime fanbase. Neon Genesis Evangelion will arrive in June 2019, and a live-action series based on Cowboy Bebop is also in development starring John Cho, Mustafa Shakir, and Daniella Pineda.

In addition to that, animes based on Altered Carton and Pacific Rim are also in the works. It's possible in the future some kind of arrangement can be worked out for Netflix to stream My Hero Academia, but for now, fans of the series will have to seek it out on other platforms.

It’s pronounced Paw-rick, not Pad-raig. Now that’s out of the way, a brief introduction. Padraig has been writing about film online since 2012, when a friend asked if he’d like to contribute the occasional review or feature to their site.

A part-time hobby soon blossomed into a career when he discovered he really loved writing about movies, TV and video games – he even (arguably) had a little bit of talent for it. He has written words for Den of Geek, Collider, The Irish Times and Screen Rant over the years, and can discuss anything from the MCU - where Hawkeye is clearly the best character - to the most obscure cult b-movie gem, and his hot takes often require heat resistant gloves to handle.

He's super modern too, so his favorite movies include Jaws, Die Hard, The Thing, Ghostbusters and Batman. He can be found as i_Padds on Twitter making bad puns.