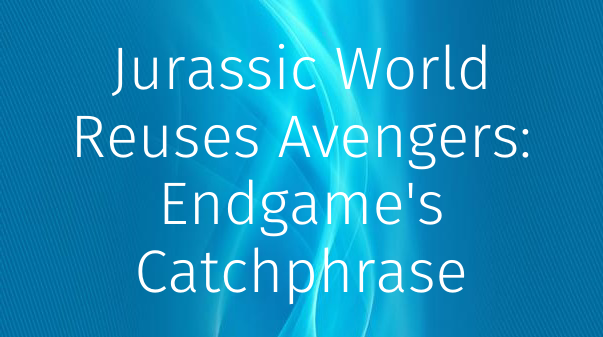 The kids in Jurassic World: Camp Cretaceous make Avengers: Endgame's famous catchphrase, "Whatever it takes," their own in season 3. Still trapped on Isla Nublar and running for their lives from dinosaurs, Darius (Paul-Mikél Williams), Brooklynn (Jenna Ortega), and Yasmina (Kausar Mohammed) are separated from their friends when Dr. Henry Wu (Greg Chun) brings mercenaries to Jurassic World. The three campers find the same courage as the Avengers to stop Dr. Wu and his men.

"Whatever it takes" was the call to action of the desperate superheroes in Avengers: Endgame. The Avengers knew that their plan to use the Quantum Realm to commit time heists and steal the Infinity Stones so that they could undo the billions of death caused by Thanos (Josh Brolin) had no guarantees that it would work. But the Avengers gambled everything on this plan and they assembled every hero available to pull off the time heists. When the Avengers marched to the Quantum Tunnel and said their goodbyes to each other, Captain America (Chris Evans) reminded everyone that they would have to do anything and everything to succeed: "Whatever it takes."

In Camp Cretaceous season 3, Brooklyn, Yaz, and Darius came to the same realization as Captain America. Dr. Wu returned to Jurassic World to collect his research on hybrid dinosaurs, and the original monsters he created, the Scorpios Rex, had already rampaged throughout Isla Nublar. Brooklynn saw Wu's research and understood the genetic terrors he planned to unleash by creating hybrids that 'improved' on the Scorpios Rex and the Indominus Rex. Knowing it was up to them to stop Dr. Wu, Darius, Brooklynn, and Yaz committed to doing "Whatever it takes," with Darius saying the line. It was as much a call to action for the Campers as it was for the Avengers in Endgame, and the penultimate episode of Camp Cretaceous season 3 was even titled "Whatever It Takes".

Brooklynn's fate end of the episode even echoed the death of Natasha Romanoff (Scarlett Johansson) in Avengers: Endgame. When Black Widow and Hawkeye (Jeremy Renner) traveled to Vormir to retrieve the Soul Stone, they learned from the Red Skull (Ross Marquand) that one of them would have to sacrifice their life to earn the Infinity Stone. Nat and Clint fought over it but it was Black Widow who chose to sacrifice her life for the universe and she cited Cap's words, "Whatever it takes," taking the phrase to its ultimate meaning.

In Camp Cretaceous, Brooklynn was trapped while she and her friends tried to escape Wu's underground labs and she also dangled by her fingertips. Darius and Yaz had to get the laptop containing Wu's research away from the geneticist and his henchmen so Brooklynn sacrificed herself and stayed behind, even though it meant she would be captured. Brooklynn's heroic last words in episode 9 were "Whatever it takes" and she understood what they meant as well as Black Widow did in Avengers: Endgame.

John Orquiola is a Features staff writer and interviewer who has been with Screen Rant for five years. He began as a director’s assistant on various independent films. As a lover of film and film theory, John wrote humorous movie reviews on his blog, Back of the Head, which got him noticed by Screen Rant. John happily became the Star Trek guy at Screen Rant and he leads Feature coverage of the various Star Trek series, but he also writes about a wide range of subjects from the Marvel Cinematic Universe to Cobra Kai. His other great nerdy love is British TV series like The Crown, Downton Abbey, and Killing Eve. John can be found on Twitter @BackoftheHead if you want to see photos of the food he eats.