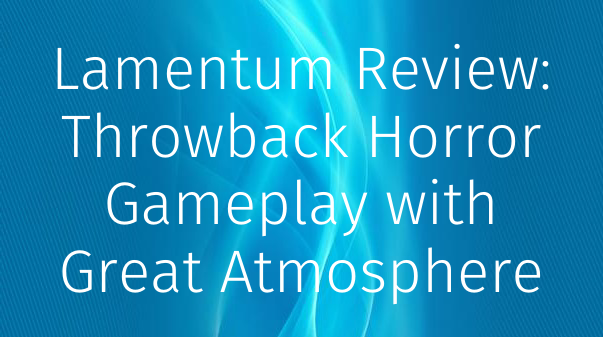 Some fans think survival horror throwbacks need more attention. With numerous quality-of-life improvements shaping the genre as it pokes its way into modernity, there are still those who pine for the days of ink ribbon scarcity, clumsy combat, and generally confusing puzzles and keys. New upcoming pixelated survival horror game Lamentummaintains the first two bullet points and markedly improves on the third, presenting a rather stringent genre example with some neat tricks. Barring a few considerable bugs, it makes for a decent horror experience which especially caters to genre purists.

Victor approaches the Grau Hill mansion estate with his sickly wife, committed to curing her deathly ailments at any cost. The setting is nocturnal New England in the 18th century, with the intro portion getting to the goods fairly briskly. After setting down for the evening, Victor wakes up in a blood-soaked bed with everything in the mansion unsettled and transformed, horrors which will continue to accumulate through Lamentum’s 10-hour-or-so playtime. Also note that the actual playtime won’t be reflected via save files, as limited-use inkwells don’t track failed progress attempts.

Yes, it’s 2021 and there's still limited save capacity. Sure, this was a selectable option in the advanced difficulty settings of 2019’s successful Resident Evil 2 remake, but Lamentum offers no considerations otherwise. That means no gameplay accessibility options available, so the overall message is master the game or put it down.

This speaks to that aforementioned fanbase, those same folks whose patience for clunky combat and tedious mazes is custom-fit for Lamentum’s gameplay. On the other hand, some of the puzzles here are decidedly more interesting than what’s found in other classic survival horror games, and there’s even a little light pixel hunting while scrounging for supplies. A full suite of melee weapons can be found, all of which are awful in their own particular way, with snail’s crawl windups and limited reach. A few firearms with limited ammo are strewn throughout Grau Hill’s grounds, as well as a reasonably good stock of healing bottles of laudanum.

The bestiary has its highs and lows. With the essential limitations of Lamentum’s pixel art, the vague allusions to detail in these grotesque Lovecraftian abominations and disfigured Cronenbergian horrors make them remarkably effective on the screen. This is all helped further along by some excellent, if repetitive, sound design; Little murmurs in the darkness past limited lamplight grant the approach some oomph, though Victor’s groans when struck sound like placeholder audio from a beat ‘em up game.

As the game progresses, Grau Hill’s map expands further and further, spiraling out into a play area that is much larger than it first appears. Unfortunately, this makes certain points of progress laborious, with endless circuits of every room and hallway to confirm where a certain item (held in a very limited inventory) might be needed or activated to get to the next portion. This type of gameplay, along with the clumsy combat and limited saves, are what’s going to alienate certain Lamentum players and enthrall the rest.

To the game’s credit, most instances of confusion are down to missing a certain clue or valuable line of text. Once that cause and effect clicks, though, Lamentum’s puzzles turn into the star of the show. None of them are mercilessly difficult, but they do reward careful reading and attention, and are miles better than the most esoteric examples in the genre.

Sadly, some difficulties with the Nintendo Switch build played for review compromise the overall package. Lengthy loading times are constant, with some saved games taking up to 60 seconds to reload after a death. When that death was a sudden "gotcha" trap with limited callout, the resulting frustration and tedium can feel unbearable. Yes, this adds relevant risk to over-exploring past a distant save point, but the punishment of Lamentum's loading screen purgatory does not fit that crime.

There were also a number of bugs which stymied review, including getting stuck inside level architecture and losing control of the left Joy-Con analog stick during harried sequences. Player mileage may vary on this front, and a version update will hopefully cleanse these issues on day of release. Beyond these misgivings, additional praise is due for a general absence of jump scares, that old standby which indie horror relies upon all too frequently. The occult themes, macabre designs, and that ambient audio prove much more effective at Lamentum’s goals. There are even a few different endings - two of which are not obvious - which bump up the replayability like other survival horror classics. Lamentum is a fine debut that happens to serve a very specific fanbase, the same players who will celebrate its lack of trusty modern gameplay conveniences.

Lamentumreleases on August 31 for PC, Nintendo Switch, PlayStation 4, and Xbox One. A digital PC code was provided to Screen Rant for the purpose of this review.

Leonardo Faierman was born in Buenos Aires, raised in Queens, on the playground was where he planned most of his schemes. Since then he's plowed a jagged path as a writer, editor, podcaster, comic creator, and mostly benevolent malcontent in New York City.

His favorite comic book is Love & Rockets, favorite film is Mad Max: Fury Road, favorite video game is Guardian Heroes, favorite book is The Thief's Journal by Jean Genet. At the time of this writing, there is the distinct possibility that all or some of those have changed.

Leo's 1/5th of the long-running podcast @BlackComicsChat, 1/2 of horror podcast @TheScreamSquad, film editor for the independent sci-fi monthly newsletter Narazu, and generally has words all over the interwebs, but they're frequently gathered up on Twitter at @LeonardoEff — you can go yell at him there, if needed.