Lost: 5 Characters Who Were Gone Too Soon (& 5 Who Overstayed Their Welcome) 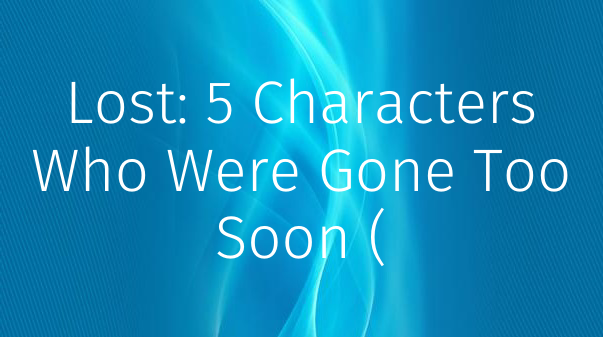 Lost: 5 Characters Who Were Gone Too Soon (& 5 Who Overstayed Their Welcome)

When LOST debuted in 2004, the audience felt like they were watching a big screen movie instead of the pilot of a television series. It had a mysterious premise, a whole lot of action, and a very large cast of characters to introduce. The main characters were slowly fleshed out over flashback episodes as the mythology of the series grew. Some of those characters didn't make it to the end of the series while others saw their stories continue long after fans were interested in them.

It's understandably hard to keep an audience invested in dozens of characters across several seasons, especially with behind the scenes issues getting in the way of storytelling. LOST was marred by a writers' strike in Hollywood, actors wanting out of their contracts, and more. It's also hard to predict which characters the audience will connect with most or which storylines will have to be dropped, leading to some interesting story choices.

In the first season of the LOST, it's unlikely too many members of the audience would have missed Shannon. She was selfish and vain, and not the most likable of the survivors. In season two, however, her arc began to move in a new direction and the audience started to understand her.

This one might be a bit controversial. After all, for much of the series, Jack is the one leading the Oceanic-815 survivors on this mysterious island. It takes Jack a very long time though to begin seeing beyond his ow point of view and understand that his way might not be the only way to survive.

It's also common knowledge for big LOST fans at this point that Jack was originally conceived as a false leader. The pilot was going to set him up as the leader, and then transition to another character. While getting rid of Jack in the pilot would have robbed the audience of a lot of excellent backstory, condensing some of his very stretched out story would have streamlined a bit of the more meandering stories. The character exiting earlier than the final season would have allowed other characters to step up even sooner in the series.

When the series introduced Mr. Eko, it seemed he would end up with a very large role in the series. In fact, his storyline seemed to be tied intricately to the mythology of the island. Unfortunately, the audience didn't get to see how his story played out because the Man In Black killed him in the guise of the island's smoke monster.

This isn't necessarily down to the writing of the series, but a change in plans. The actor behind the character, Adewale Akinnuoye-Agbaje, wanted to leave the show. Producers obliged and the writers had to come up with a way to write him out while he was till part of the island plot. Fans might have been disappointed, but it's understandable.

One of the hallmarks of the island is that nearly no children are ever born there. Women and babies just don't seem to survive the birthing process. There are a handful of exceptions to this rule, and Alex is one of them. Alex is one of the only teenagers on the show, and a fan favorite. The audience loves seeing her become aware that the good guys she's always known might not actually be the good guys. Her boyfriend, Karl, however, didn't really endear himself to the audience.

The audience didn't miss him when he wasn't around, and he really didn't add much to the story. His death wasn't as impactful as so many others.

Walt isn't a character who gets killed off on the show, but he does vanish for a long stretch of time, and gets to appear in the show's finale. Walt gets kidnapped, and then, he gets the chance to go home.

The trouble is, Walt is determined to be "special" by the other people on the island. That's the whole reason he's taken to begin with. That storyline never gets to be explored when he simply leaves the show.

If there's one character who is universally hated by the audience, it's probably Keamy. He's brash, violent, and cares only about himself. He also is responsible for taking Alex's life when Ben Linus attempts to bluff his way out of a standoff.

Keamy is in the series simply as an obstacle to keep the survivors from getting off the island. He doesn't get any character development in the time on the show, so he really didn't need to last as long as he did.

To be fair, even once Juliet is killed off, her character still appears in the "flash-sideways" segments after her death. That being said, Juliet is one of the most surprising fan favorites of the show.

Introduced as a fertility specialist amongst "the others," she could have become an enemy of the survivors since she was one of the people responsible for attempting to kidnap Claire, and she helped hold Jack, Kate, and Sawyer prisoner. As Juliet's story was fleshed out, however, it was easy for the audience to empathize with someone who thought she was doing good and ended up in a situation she couldn't get out of. The audience would have loved to explore more of her story as an ally to the group.

Another controversial entry, John Locke was a huge part of making the series so iconic. His storyline was constantly full of big reveals. Locke, however, was clearly meant to be a foil for Jack for most of the series. Once the two were on the same page, Locke's story didn't really seem to go anywhere else.

It's not clear if the writers just didn't know what else to do with him at that point, or if they just wanted to use the phenomenal talent that is Terry O'Quinn as much as possible. They really can't be faulted for that. Making Locke's body the vessel for the Man In Black was a good choice, but it could have happened even earlier in the series to shake things up.

It might seem impossible that Jin left the series too soon. He's one of the characters that appears in the most episodes, and he almost makes it to the end of the series from the pilot episode. His death, alongside Sun, is one of the saddest in the entire series, and it's also entirely possible that his character could have been allowed to survive.

Jin's death feels senseless in the story. He's one of the characters who experiences the most growth and has the most layers. In his final moments, he decides that he can't leave Sun to die alone, but he has a daughter out in the world that he hasn't had the chance to meet. While Sun can't escape her fate, Jin choosing to stay with his wife robs him (and the audience) of a chance for a happy reunion with his daughter.

Claire has a bit of a troubled past. She's terrified she won't be a good mom to her child - and then she doesn't get to be one. The story sees her disappear and come back pretty often. As great as Claire's story is, when she's gone for long stretches, the show doesn't miss her.

That's the only real reason it feels like the character overstays her welcome in LOST. Claire's story with Aaron could have been concluded much earlier than it was instead of abandoning the character for long stretches.

Amanda is a freelance writer in Florida. She holds a Psychology degree and loves superheroes and serial storytelling. Her favorite heroines include Black Widow, Blake Belladonna, and Sailor Jupiter.