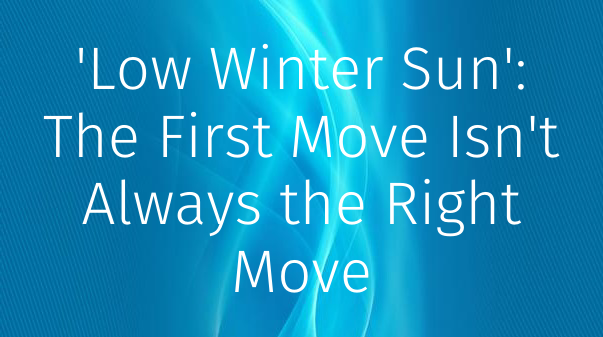 On the one hand, it's good that we are now seeing how some of the rather disparate threads Low Winter Sun is following might come together to create a more compelling and complete narrative. The collision course that Frank, Joe, Skelos and Maya and Damon are all on, as it pertains to the overall investigation into McCann's murder (and, tangentially, the murder of Anton and Billy), has begun to feel inevitable. But there is still the overwhelming sense that, despite the approach of certain conflicts and various underhanded procedural dealings, the series hasn't yet demonstrated why the audience would find this clash interesting.

The crux of the series is centered on Frank Agnew's unwitting descent into the darkness of police corruption and the kind of criminality that’s plaguing the beleaguered city he calls home. All of this has altered the personal and professional trajectory of a man who was presumably a "good cop" by sending him to the fringes of his profession, exposing horrors like Joe Geddes' preference for Lafayette style hot dogs and Canadian brothels that've taken their interior decorating cues directly from Latvian Castle Monthly and an old VHS copy of Eyes Wide Shut.

But with the escalating sense of civic and political importance surrounding the investigation of McCann's death (as long Trey Jackson isn't fighting that night), there comes the sense that, as Geddes predicted, someone is going to have to take the fall for the crime he and Frank committed. That means that, in order to skirt the law for a single crime, Frank may have to perpetrate a gradually more complex series of crimes that will inevitably lead to an innocent (of the crime in question, anyway) going away for a very long time. Essentially, what Frank unwisely thought would be a one-and-done type situation actually has him facing the unpleasant prospect of doing more of the same, just to save his hide.

Like Dani Khalil after the fights, Frank made the first move without thinking the consequences through; he was focused only on success and driven by an urge far more powerful than common sense. As a result, he wound up in a predicament far more uncomfortable than having to face a co-worker after making an ill-advised romantic pass.

All in all, that adds up to a potentially interesting story, but the manner in which the series has delivered it up to this point leaves so much to be desired. Last week's 'Catacombs' took Frank back and forth to Windsor and such a detour came far too early. Rather than create intrigue or inform on the protagonist's perspective, the episode only succeeded in sucking dry what little life was left at the bottom of the narrative's cup. The result, then, was an episode like 'Cake on the Way,' which was essentially saddled with reminding the audience how the various ongoing plots were connected and trying to establish why their relationship to one another matters.

Right now, the connection between McCann's murder and Damon's Blind Pig is too tenuous and speculative. Sure, the shootout at the Blind Pig created drama and further illustrated how, like Frank and Joe (and to a lesser degree, Dani), Damon's first move turned out disastrous because it wasn't well thought out. The only problem is, at this point, the series' narrative feels much the same.

Low Winter Sun continues next Sunday with 'The Way Things Are' @10pm on AMC.