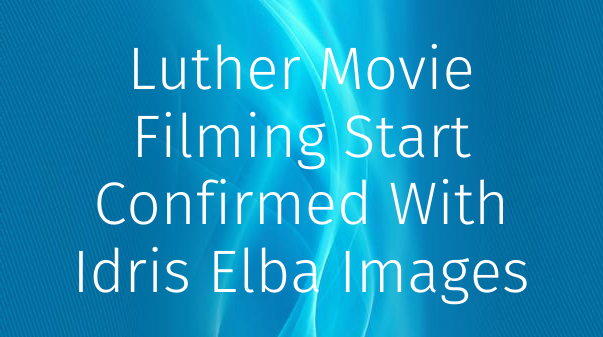 Luther star Idris Elba has confirmed with photos that the filming of the new movie based on the crime drama series of the same name has begun filming. Luther follows the titular John Luther, a Detective Chief Inspector whose dedication to his job leads to trouble, especially regarding his nemesis, Alice Morgan (Ruth Wilson.) Luther has run for five seasons from 2010 to 2019, producing twenty episodes and garnering critical acclaim, notably for Elba's central performance.

Luther is created by Neil Cross, who has also written the script for the new film. The Luther film will feature Elba's return as well as new characters played by The Lord of the Rings star, Andy Serkis, and Tony-award winner, Cynthia Erivo. The movie is also being produced by the show's original network, the BBC, and Netflix, with the latter distributing the film as well.

Now, Elba has confirmed on Twitter that the Luther movie has begun filming. The tweet features a picture of Elba in costume and a picture of the clapperboard, including the date October 27, 2021, indicating the movie has been filming for at least two weeks already. Elba also included the brief caption "Oi......I'm back!" in reference to the character's return after being absent from screens for over two and a half years. The clapperboard also confirmed that Jamie Payne, director of the show's fifth season, is also the director of the upcoming film. Check out Elba's tweet below:

Luther had received high acclaim in its television format, garnering ten Primetime Emmy Award nominations, including four for Elba's performance. The show has also been acclaimed for its dark plots and moral ambiguity, though the shortness of the seasons has been criticized. Plans for a film adaptation have been in the works nearly as long as the series itself, suggesting that the adaptation to the silver screen would be more appropriate for the method of storytelling Luther is accustomed to.

Elba is one of the most highly sought-after actors working today, with recent films including The Suicide Squad, Concrete Cowboy, and The Harder They Fall, providing plenty of opportunities for the actor to express his range. Though, with so many movies under his belt, it's interesting to see his commitment to the Luther character remain after over eleven years in the role. With comparisons to Sherlock Holmes and Colombo, Elba has shown that his excitement and commitment to the role of the morally ambiguous detective John Luther will make the character's transition to film a smooth one, with all the gritty fascination that Luther fans expect.

Warren Elliott is a freelance entertainment writer newly working for Screen Rant. They graduated from Virginia Commonwealth University in 2020 with a degree in English and Creative Writing.