Mad Men: 10 Things You Forgot From The First Episode 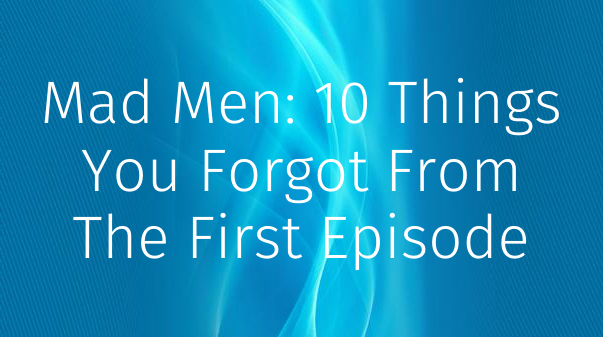 Mad Men: 10 Things You Forgot From The First Episode

Don. Peggy. Pete. Joan. On July 19th, 2007, viewers time-traveled back to the New York City of the 1960s and were introduced to the golden age of Madison Avenue via the gang known as Mad Men. From 1959 to the early 1970s, some stuff went down at Sterling Cooper. There was Don Draper (Jon Hamm) and his merry band of mistresses; Betty (January Jones) and her housewife travails; Peggy (Elisabeth Moss) and Pete's out-of-wedlock baby; Joan's indiscretion with the Jaguar client so she could make partner; Betty's cancer after her remarriage; and the coup de grace of storylines, Don--aka Dick Whitman--stealing another man's identity.

It's almost hard to remember how the series began. Here's a review: season 1, episode 1 was called "Smoke Gets In Your Eyes" and laid the groundwork for the forthcoming storylines and "jam-packed" is an apt description.

It's hard to believe but true. From episode 2 on, Draper walked through the world like he owned the joint, but the opening shot of this first show is in a crowded bar, where the young handsome ad man is just another patron scribbling ideas for an ad campaign on cocktail napkins and not loving what he's coming up with.

In fact, the man who eventually will be known around town as an ad genius, goes to his client presentation with nothing and newbie Pete Campbell (Vincent Kartheiser) hijacks the meeting -- but bombs. An off-the-cuff remark as the dissatisfied client is walking out the door sprouts an idea, and Don saves the day. Moving forward, his triumphs would be met with a smug drag of a cigarette. This time it was a sip of scotch and a look that said: PHEW.

He looked like your typical straight-laced 50s businessman, replete with fedora and pocket square. But the audience's first glimpse of his personal life is Draper knocking on the door of his Greenwich Village artist mistress, Midge (Rosemarie DeWitt). Everyone met the sexy boho babe before they even knew Don's marital status. He confides in Midge that he's got writer's block and might lose his job if he doesn't come up with a Lucky Strike slogan.

He half-jokingly suggests they run away together. "I don't make plans and I don't make breakfast," offers the free spirit. Clearly, their relationship does not run deep and they rely on each other to physically heal the wounds of the outside world.

Hired right out of secretarial school, Brooklyn-born Peggy Olson's first day at Sterling Cooper on Mr. Draper's desk coincided with the series opener. Before she even stepped into the agency (or took her hat and coat off), three young executives -- Harry Crane, Ken Cosgrove, and Paul Kinsey -- made lude, lascivious, and disrespectful comments to her in the elevator.

Ken from accounts, as he likes to introduce himself, justified the behavior by saying, "They’ve got to know what kind of guy you are, so they know what kind of girl to be." She could not even report them to HR, since men were allowed to act that way and women were supposed to find it flattering.

Her next suggestion was for Peggy to "go home, get a paper bag, cut some eyeholes out of it, put it over your head, get undressed and take a good look at herself in the mirror. Really evaluate where your strengths and weaknesses are." Peggy is told she has "nice ankles" and she should find a way to "make them sing." Later, in Don's office, Pete tells her to wear shorter shirts to show off her legs and a more fitted sweater to show off her waist. Clearly, many at S-C were bucking for a future job with the Fashion Police.

6 How About Some Shameless Anti-Semitism?

Roger Sterling (John Slattery) asks Don if the agency has hired any Jewish employees. The Creative Director's response: "Not on my watch." Well, alrighty then. It seems that Roger was asking because later that morning they had a meeting with department store heiress Rachel Menken (Maggie Siff) and the name partner wanted her to feel at home.

Don asks if Roger wants him to run down to the Jewish deli and "grab somebody" to bring to the meeting and pretend he’s on the team. (They did just that, but found the guy in the mailroom.) We then were made to understand that the "Jewish guys worked for the Jewish agencies." Ms. Menken was not impressed with any of them.

5 With A Side of Blatant Misogyny

When Rachel questions Don's creative strategy ("Let's offer a coupon") in the meeting and explains that they share a wall with Tiffany & Co., meaning they are a high-end shop, Draper shoots back, "I'm not going to let a woman talk to me like this," before storming out. It seems to matter not that he jeopardized the potential account because the male ego was more important and a piece of business run by a female.

Roger asks Don to "make nice," so he takes Rachel to dinner and is less interested in her marketing plans for the store than he is in why she’s not married. Sparks fly. In the next episode, she becomes mistress number two.

We become aware of this fact because the Kennedy-Nixon presidential debates are coming up -- the first ever to be televised. Roger wants Don to get excited about dreaming up the ad campaign for the candidate whom he describes as "young and good looking." It turns out to be Richard Nixon. They agree to take on the assignment.

We also find out that Don's a war hero, as evidenced by the Purple Heart that falls out of his drawer, establishing that he was in Korea.

And not a moment too soon. In this inaugural episode, it’s the day of Pete Campbell's bachelor party and it's all the men can talk about (when they're not sexually harassing the new girl). Pete's finance, Trudy (Alison Brie), is trepidatious about his evening out with the boys, so he promises her that at evenings end he will drop by her family's swanky Upper East Side apartment. This is the first of many promises that will not be kept in their marriage, as the groom-to-be ends up at Peggy's apartment, where he spends the night.

When she went to the male gynecologist (at Joan's suggestion), he warns her against becoming the "town tart" and shames her for sleeping with men before marriage. Charming.

In the Lucky Strike meeting, part of selling the client on the idea he pulled out the air at the last minute is for Don to explain that "Advertising is based on one thing: happiness. And you know what happiness is? Happiness is the smell of a new car; it’s freedom from fear; it’s a billboard on the side of the road that screams with reassurance that whatever you’re doing is OK. You’re OK." The room was mesmerized. As was the audience, hence the reason they kept tuning in for seven seasons.

Later in the episode, Draper explains to Rachel Menken that the concept of love "was invented by guys like him to sell nylons." How could she not resist him?

1 Don Draper Has A Family?

Who knew? He went through the whole episode without referencing them once. There's not even a picture of the wife and kids on his desk for Peggy to comment on. The entire day, the "little woman" never called the office once.

In the very last scene, we meet the beautiful, blonde (and dead-ringer for Grace Kelly) Betty, who’s awoken by Don who’s home very late, again. It is evident that this gorgeous couple has sexual chemistry. He leaves her bedside only to kiss his two children goodnight and this is how we discover that this suave womanizer is also a family man. And everyone remembers how that turns out.

Next13 Best Serial Killer TV Shows On Netflix, Ranked (According To IMDb)