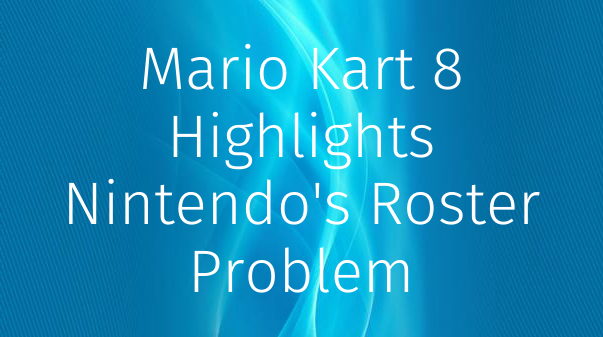 Nintendo's party games, which tend to center around the Mario franchise, include perhaps the most recognizable ensemble cast in all of video games, but Mario Kart 8 is perhaps most emblematic of a recurring problem with Nintendo's party games: the playable character rosters are consistently lacking. Mario and company do everything from play sports like in Mario Golf to compete in digital board games in Mario Party, but the inconsistency of available characters is an ongoing problem.

Mario Kart 8, and its Deluxe version on the Switch, is a good example of Nintendo's roster issue, because at first glance, the roster appears quite large. Mario Kart 8's starting roster, including unlockable characters (but before DLC), totals 30 characters. This is a lot - numerically speaking - but it gets less impressive the more the roster is examined. One slot is for Mii characters, two are metallic versions of Mario and Peach, five are baby versions of other characters, and seven are the recurring enemies known as the Koopalings.

Roughly half of Mario Kart 8's roster is made up of variants or (no offense to the Koopalings) slightly altered duplicates. Mario Kart also suffers from leaving out characters that have made the cut in other Nintendo party games, such as Birdo and Diddy Kong. This consistently leads to disappointment over the exclusion of certain characters from the latest game's roster.

Party games featuring Mario and friends seem to typically involve a handful of the A-listers (Mario, Peach, Toad, Bowser, etc.), and is rounded out by lower profile characters, who are often AI enemies from other Mario games. This is great for variety, and making sure fringe characters get a chance to become more popular, such as Chargin' Chuck making his playable debut in Mario Golf: Super Rush, but it might come at the expense of other beloved characters. The aforementioned inclusion of Chargin' Chuck is a neat addition, but it only serves to highlight Super Rush's lack of crucial characters, most notably Toadette, who (rather inexplicably) already makes an appearance as a golfer in the game's single-player content. Toadette has been featured in Nintendo games for long enough now that it feels like she should have a permanent spot on any game's roster.

This certainly isn't a plea for every game to have as many characters as Super Smash Bros. Ultimate - that would be unreasonable. But it would be nice for Nintendo to have more consistency in its party game character lineups. That way players will know what core characters to expect, and instead of worrying about Waluigi being forgotten by Nintendo, people can speculate on what obscure characters are finally getting their shot (like Chargin' Chuck), or who could take a spot from the unnecessary number of Koopalings in Mario Kart 8.

A passion for video games was instilled at a young age when Kyle Gratton and his older brother were gifted a Nintendo 64 with Ocarina of Time and Mario Kart. Graduating from the University of Kansas as an English and History major, with a minor in Film, Kyle enjoys discussing literature, movies, television, and especially video games. He currently writes features and reviews for Screen Rant's games section, and dabbles in short fiction occasionally. He can be found on Twitter @KyleGratton.