MBTI® Of Raised By Wolves Characters 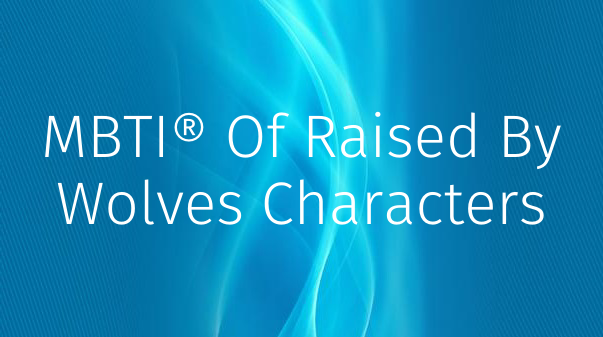 MBTI® Of Raised By Wolves Characters

Raised by Wolves has quickly shown that it is one of the most compelling, and at times disturbing, science fiction series in recent years. Part of what makes it such a fascinating show is its wide variety of characters, who run the gamut from sinister androids to human children striving to survive on a new planet.

All of the Raised By Wolves characters, whether heroes or villains, show different personality traits as they make sense of their new world. They can thus be best understood through the lens provided by the Myers-Briggs® personality system.

Mother is a rather sinister character, and she is sure to be seen as one of the most fascinating robots in movies and television.

As an android, she is ruthlessly analytical, which means that she fits very well into the mold of the INTP. Just as importantly, she shows that personality type’s ability to focus on various problems that arise, never resting until she solves them. This makes her an ideal protector for the children, even if she is also a very dangerous enemy.

While Mother is incredibly analytical, Father is a little less pragmatic. In fact, he has some elements of actual humanity in his character, which means that he is a little more flexible when they encounter trouble.

Most notably, he does possess Mother’s devotion to the human children that are under their care, which means that he aligns very well with the ISFP personality type, and he repeatedly shows that he is willing and able to do what is necessary to protect the children from those that would try to harm them.

Of all of the children that the androids take under their care, Campion shows that he is the most extroverted and the most dynamic, always willing to take charge when others need a leader.

In this respect, he is an ENFJ, which is a personality type characterized by their ability to inspire others and in their ability to promote and encourage others to realize their full potential. At the same time, he doesn’t always think about things as much as he should before leaping to conclusions, and there's more than a hint of darkness to his character.

One of the things that makes Raised by Wolves one of the best science fiction shows is its ability to craft characters that are full of complexity. This includes Campion Sturges, the scientist who programmed Mother and Father to take the children to their new home.

As an INFP, he is the type of person who is always able to see new possibilities, which is what leads him to believe that he can reprogram one of the deadly androids to be one of humanity’s ultimate saviors.

As with so many other great HBO series, this one is full of characters who are morally compromised and complicated. Of all of the characters that appear, Sue/Mary is arguably one of its most fascinating, because while she is clearly capable of masquerading as someone else, there is an emotional depth to her that leads her to grow genuinely fond of her pseudo-son, Paul.

As an ISFJ, she does everything in her power to protect him, even though he is not technically her own child.

Marcus/Caleb has some of the same traits as his wife, Sue/Mary, but he is a much more straightforwardly dynamic personality.

As an ENTJ, he is the type of person to take charge very easily when the opportunity presents itself, and he’s not afraid to tell others what he thinks, often in the most forceful way possible. Travis Fimmel does a great deal to show why this is one of his best roles (after his notable turn in Vikings), imbuing the character with a powerful and at times unsettling intensity.

As one of the children that Mother “rescues” from the Mithraists, Hunter very quickly shows that he likes to think of himself as a leader. In that sense, he shows many of the traits that are often associated with the ENFP, which is a personality type that is known for seeing possibilities and seizing them.

At the same time, he also shows that type’s need for affirmation from others, and he shows that there is a softer side of him that he doesn’t want others to understand.

Tempest is another of the children that Mother kidnaps, but while Hunter is at times unsure of himself, she is an ESTJ and thus possessed of a formidable willpower that is second to none.

She has a decisive personality, and she doesn’t wait for anyone’s permission before doing what she thinks is necessary. For this reason, she is one of those who most readily fits in with the world of the androids, which puts her somewhat at odds with the other children.

Paul is one of the more enigmatic characters in this series and, given the trauma that he’s endured, it’s not surprising that he keeps some elements of himself hidden from others.

He is very much an ISFP, especially given that he is the type of person that always wants to have their own space and to work according to their own rules. While he also has that personality type’s aversion to conflict and disagreement, he also shows that he has what it takes to be a leader in his own right, particularly when he feels threatened.

Thomas J. West III earned a PhD in film and screen studies from Syracuse University in 2018. His writing on film, TV, and popular culture has appeared in Screenology, FanFare, Primetimer, Cinemania, and in a number of scholarly journals and edited collections. He co-hosts the Queens of the B's podcast with Mark Muster and writes a regular newsletter, Omnivorous, on Substack.