Michelle Pfeiffer on Whether Catwoman Could Beat Wonder Woman 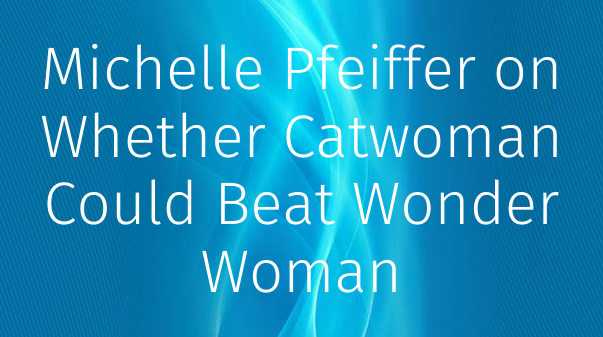 Michelle Pfeiffer on Whether Catwoman Could Beat Wonder Woman

Michelle Pfeiffer is pondering who would win in a showdown between her Catwoman and Gal Gadot's Wonder Woman. Pfeiffer, of course, became a DC movie legend in 1992 when she gave what is arguably the most iconic live-action performance of Catwoman to date in Batman Returns. Prowling around and plotting chaos with The Penguin (Danny DeVito) in director Tim Burton's smash sequel to 1989's Batman, Pfeiffer not only proved to be a worthy adversary of the Caped Crusader (Michael Keaton), the film has stood the test of time as it still holds up 25 years after its release in theaters.

Another DC film legend was born this summer, of course, with Wonder Woman, as Gadot gave a commanding performance as Diana, princess of the Amazons, in a film that not only grossed more than $800 million worldwide, but is carrying its summer movie momentum well into the fall with an awards season campaign.

With Pfeiffer recently revealing how she'd love to play Catwoman again and Wonder Woman still very much at the top of fans' minds, the three-time Oscar-nominated actress is having fun mulling over who would win in a fantasy matchup between the two DC screen giants. According to Variety, Pfeiffer weighed in on who she thought would win in a showdown between the two characters. She says:

I only have a whip, I don't really have superpowers. So, she might win. She's got that shield, and then she's got the wrist thing. Doesn't she zap people with those? I have claws and a whip.

While Pfeiffer seems to possess age-defying powers like Wonder Woman (she looks virtually the same as she did 25 years ago), her presumption that Gadot's Wonder Woman would take down Catwoman in a matchup is probably the wisest prediction to make. True, Catwoman has her claws and a Cat O' Nine Tails to fend off Wonder Woman's twirling Lasso of Truth, but apart from that, the Amazon warrior princess is a powerful demigod who could easily take down the character who really has nothing more than the sleek moves and sensibilities of a feline. At least Catwoman has the benefit of having nine lives.

Since Pfeiffer has launched the first salvo in a potential Catwoman vs. Wonder Woman showdown, it would be fun to hear Gadot's take on the dream matchup. Given Gadot's friendly and enthusiastic demeanor, the answer would probably be as gracious as Pfeiffer's thoughts on matter, which clearly comes from a place of respect for the characters and their abilities. With any luck, the matter of who would win in a Catwoman-Wonder Woman big screen smackdown will be settled in a future Justice League movie, even if Pfeiffer isn't playing the role that made her a comic book movie icon.

Next: Michelle Pfeiffer Would Love to Reprise Catwoman Role