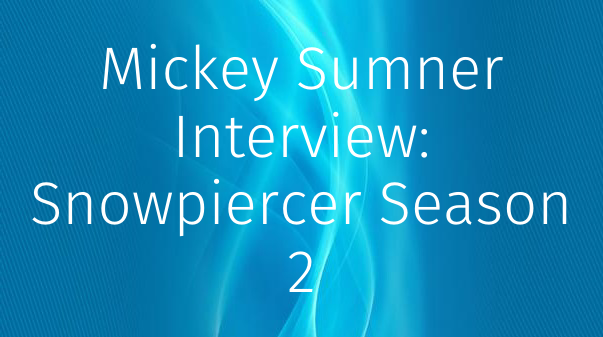 Snowpiercerseason 2 had another gruesome murder mystery that was solved by Bess Till (Mickey Sumner). The Train Detective has been one of the key passengers trying to hold together the fragile democracy instituted by Andre Layton (Daveed Diggs). But the murders Bess solved are part of the disintegrating faith in Layton's authority and the passengers are now demanding the return of Mr. Wilford (Sean Bean) to take charge of Snowpiercer.

Screen Rant had the pleasure of interviewing Mickey Sumner, who plays Bess. We discussed her process of how she created her character, Bess's emergence as a warrior and action heroine, the poignant meaning one of Snowpiercer season 2's new sets has for the actress, and whether or not there will ever be a Snowpiercer musical episode.

Screen Rant: First of all, I love Bess Till. She's genuinely one of my favorite characters. She carries all of the guilt and sins of the train but she keeps going and enduring and it's really inspiring to watch her.

Mickey Sumner: Thank you for seeing her. I love it when people really connect with the character and share with me how they feel about her. It's so cool. It makes my job so satisfying.

Screen Rant: I imagine Bess is very different from the real you. As an actor, who do you do to get in her headspace?

Mickey Sumner: I actually think there are a lot of elements to Bess that are like me but obviously, her life is extremely heightened in dealing with the apocalypse and being stuck on this train. And all of the pain, and loss, and violence, and as you said, sins of the train. When I get into character, a lot of what I do is outside-in, usually. I really worked on my hair and my clothes and my shoes with all of the departments. Usually in the morning before I work, they shave my head and that really grounds me into Bess. Obviously, I'm British so we work on my American accent with my dialect coach. There's so many different elements.

Preparing for season 1, I interviewed and spent a lot of time with these two NYPD cops just to really try to understand the makeup of a female cop. I was really interested in that and why they chose to be cops, and the hierarchy of the police department because Bess was a rookie cop in Detroit pre-Freeze. That information and those details were really important to me. And then physically, it's a really physical role. As you know, there's a lot of fighting, which I love. I work really closely with our stunt coordinator and my stunt double. I train at the dojo and I get really into it. So that's looking at Bess sort of holistically.

Screen Rant: You just answered my next question about the fight scenes. Bess throws down every season and you just had an epic fight with Pastor Logan in the last episode.

Screen Rant: I take it you love doing those fight scenes and the war scenes. Beth is a warrior.

Mickey Sumner: She is a warrior. I'm always like, "Wow, she just goes into battle with just a shirt on!" Like, where's her vest? Some of my favorite scenes [are the fights]... and learning all these new skills. We've been really blessed with this stunt team. They're so patient and they're so generous. I had two different stunt doubles in season 1 and season 2 but they're so badass, these women! I love doing these scenes, and also they're right for the character. I just love it.

Screen Rant: Let's go back to the start of season 2. When the season began, Bess was no longer a Brakeman, she survived the war, and she broke up with Jinju. The breakup is one of the main reasons why Bess is hurting so much this season. But I definitely miss that relationship. Do you think Bess can ever find love on the train?

Mickey Sumner: It's a really good question. I think the loss of Jinju and the loss of her uniform, even though the uniform sort of represented being part of this oppressive, classist system, [hurt Bess]. I think behind the toughness and behind her sort of swagger she's a romantic and is looking for a place, and purpose, and family on this train at the end of the world. And yeah, in season 2, she's really struggling. She's like this lone wolf stalking the carriages (laughs), which is great. And she has this fling with the bartender in the Nightcar. I think she's searching and she's trying to figure herself out. I don't think she's quite ready for romance yet. But she's hurting for sure.

Screen Rant: One of the great things about Snowpiercer season 2 is at the end of every episode, there's a title card with info about suicide prevention. Everyone on Snowpiercer is obviously so traumatized, Bess included. But there's also the hope that Melanie is offering of life outside of the train. Is that something Bess is hoping for? Has she wrapped her head around that possibility?

Mickey Sumner: It's so amazing to me how close Snowpiercer's storyline is now with what everyone throughout the globe is dealing with, with the isolation, it's so powerful. What we're going through... it's so human to normalize what we're going through but it's a real struggle. I'm sorry, I didn't answer your question. What was it again?

Mickey Sumner: That's what I was going for. I feel like we have this hope right now that we can break free of this pandemic and we're gonna get through it. I think Bess is a romantic and I think she's striving toward a better future, which she believes Andre Layton can lead us to. And so, I think that she has hope in him. And she's sort of lost everything so I don't think she has anything else to lose at this point. I think she's interested in justice and doing what is right. Maybe there is some hope underneath all of that.

Screen Rant: You mentioned Andre Layton. You share most scenes with Daveed Diggs. I'm a huge fan of his and of Hamilton, of course. Do you think there could ever be a musical episode of Snowpiercer?

Mickey Sumner: We honestly talk about it almost every time we're on set. There are so many musicians in the cast and so many amazing singers that we're always like, "We should do the musical!"

Screen Rant: I would love it.

Mickey Sumner: I know. [Daveed] is so great. I don't know if that's gonna happen but you never know. You never know.

Screen Rant: For me, one of the joys of watching Snowpiercer is how immersive the show is and how amazing the sets are. For better or worse, as a viewer, you feel like you're living on the train. What are your favorite sets and cars to shoot in?

Mickey Sumner: Season 1, I loved the Night Market where all the different shops are, and the tattoo parlor, and the noodle bar. I just love that whole set. It's so rich in details and bustling with so many people, it's so fun. But in season 2, my favorite set is the Tea Room. The spiritual hub of the train where people come to grieve and remember their lost ones and loved ones. For me, it was really moving.

I haven't actually told anyone this so you're the first person to know this story but during this season, my father-in-law died, and the producers and the showrunner let me put a photo of him up in the train. So he got to be in the Tea Room, and actually, there's a little photo of him in one of the episodes. They flash to him, so [the Tea Room] became a very profoundly, personal place for me as well as for [Bess].

Screen Rant: That's beautiful. Now, if you, Mickey, had to spend seven years on Snowpiercer, what are the three must-have things you need to bring with you to survive?

Mickey Sumner: Coffee. A Kindle. And my child.

Screen Rant: So far this season, the big presence is Mr. Wilford played by Sean Bean. Everything is revolving around Mr. Wilford. But Bess, as Train Detective solving the murders, hasn't really had facetime with Mr. Wilford yet. Are Bess and Wilford finally going to cross paths at some point, and what do you think will happen?

Mickey Sumner: Not to give anything away but let's just say Wilford might be coming for her. It's possible! She hasn't escaped his clutches, let's just put it like that. He definitely is gonna find a way to get to her.

John Orquiola is a Features staff writer and interviewer who has been with Screen Rant for five years. He began as a director’s assistant on various independent films. As a lover of film and film theory, John wrote humorous movie reviews on his blog, Back of the Head, which got him noticed by Screen Rant. John happily became the Star Trek guy at Screen Rant and he leads Feature coverage of the various Star Trek series, but he also writes about a wide range of subjects from the Marvel Cinematic Universe to Cobra Kai. His other great nerdy love is British TV series like The Crown, Downton Abbey, and Killing Eve. John can be found on Twitter @BackoftheHead if you want to see photos of the food he eats.