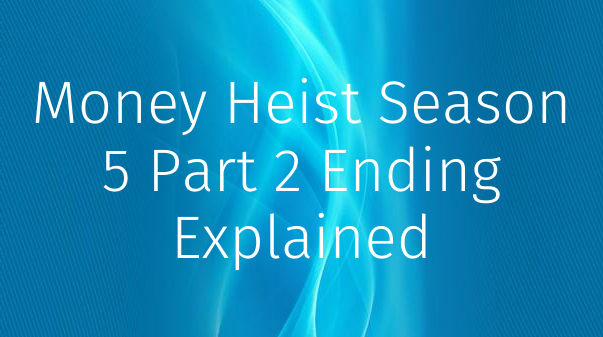 One of Netflix’s most-watched shows, Money Heist, has finally come to an end, concluding a five-season run of heists, passion, and death - here's the ending explained. Money Heist, or La casa de papel, details two carefully prepared heists in Spain, and the show’s part 5 still follows the events in the Royal Bank of Spain. What started out as a rescue operation for the illegally detained and tortured Rio (Miguel Herrán) escalates into another massive heist and an all-out war with the Spanish government, inciting mass protests in support of the gang’s cause.

Money Heist’s final season is divided into two parts, with the first part witnessing Sierra (Najwa Nimri) as she discovers the Professor’s (Álvaro Morte) hideout. Meanwhile, inside the bank, the hostages are becoming increasingly difficult to manage, with Arturo Roman (Enrique Arce) leading a rebellion, and an open fire ensues between the robbers and the army. The bloody encounter ends with the death of Money Heist’s narrator, Tokyo (Úrsula Corberó).

Setting itself from typical heist stories, Money Heist presents a ragtag group of people with varying motivations and changing moralities. The show offers not only nail-biting twists but also hard-to-miss commentary on relevant socio-economic and political issues. Similar to how the gang draws a following, Money Heist has also resonated with its viewers, rightfully earning its spot as one of the biggest shows in the world. Amidst the twists and turns all throughout the season, the series still ties all loose ends and sends off its characters successfully. Here is what transpired in Money Heist season 5, part 2’s ending.

In Money Heist season 5 part 2, the Professor, who is missing in action and tailing Sierra, helps her evade the police. Meanwhile, the gang is starting to extract the gold out through a pump, seemingly signaling the end of the Bank of Spain heist. Unknown to the team members, their celebration is quite premature, as the bank’s bombs have been discreetly defused and the gold has been stolen through a fake police raid.

The Special Forces storm the bank, subduing the robbers. The Professor then surrenders himself to the police, but not before asking his remaining crew to search for the stolen gold and feed the investigators with false information. It is revealed that the 90-ton treasure is stolen by Berlin’s former wife, Tatiana, and his son, Rafael.

Desperate to find the gold, Tamayo offers the robbers a deal: admit the location and live a new life or stay quiet and be handed a life sentence. Videos of the Royal Bank’s flooded gold vault extraction are also broadcasted globally, affecting the stock market dramatically. This pushes the Professor to negotiate — the gold bars will be returned in exchange for their freedom. Tamayo is seen adhering to the Professor’s terms when he figures out that the bars are actually gold-painted brass. Instead of revealing that the bars are fake, which will further damage Spain’s economy, Tamayo lies and declares the entire team of robbers dead. This restores the Spanish economy and allows the gang to get new identities and lead new lives with their hard-earned gold.

What Did Professor’s Note Say In Money Heist Season 5

Once Sierra learns where the stolen gold is, they are immediately surrounded by Tatiana and her team, disproving the Money Heist theory that Sierra and Tatiana are the same person. It could have ended in a violent shoot-out, but nothing of the sort happens, thanks to the Professor’s note for Rafael. Although the content of the note is never revealed, it seems enough to convince Rafael to hand over the gold and follow the original plan.

Later, Tatiana asks Rafael if he is certain that he will receive his share of the gold. To that, he answers affirmatively, pointing out their family tradition. This implies that the Professor’s note might have something to do with honoring Berlin’s memory and dreams. After all, it has been established through the flashbacks in Money Heist season 5 part 2 that this heist leans more on an emotional connection within their family of thieves, instead of it being about the money alone.

What Happens Next To Money Heist’s Robbers

By the time the heist at the Royal Bank of Spain has ended, the gang has seen members come and go, mainly because of major character deaths in Money Heist. Their siblings, lovers, and best friends have been killed, but that only made them more motivated to win the war and enjoy their triumph afterward. Before parting ways with the team, Sierra informed the Professor that the gold is safely on its way to Portugal. Although their destination is not disclosed, they are seen in a helicopter, riding into the sunset.

The Professor and Lisbon (Itziar Ituño) are engaged to soon be married, while Stockholm (Esther Acebo) and Denver (Jaime Lorente) take another shot at their marriage. Presumably, Manila (Belén Cuesta) and her father, Benjamin (Ramón Agirre) will be reunited, and Helsinki (Darko Perić) and Palermo (Rodrigo de la Serna) will enjoy their days together. Marseille (Luka Peroš) might adopt a new pet. Rio, who is still in mourning over Tokyo, might already begin his career as a young professional. Lastly, Bogotá (Hovik Keuchkerian), whose real name in Money Heist is Santiago López, might build more meaningful relationships with his seven children.

The Netflix show Money Heist had been highly praised for various reasons — its rollercoaster plot, its fast-paced and emotionally charged narrative, its cast’s overall performance— but its discussion of socio-economic issues pushed its viewers to stay. The series served as a symbol of rebellion against the oppressive shackles of capitalism. The heists depicted in the show are not just for the characters themselves, but also for the people, urging them to step up against their government and provide their own solutions against the crumbling system.

They also showed the world that even ordinary, irrelevant people could disrupt the operations of the biggest and most powerful elements in the world, air their concerns of political and economic injustices, and carve their places in history. In fact, the song “Bella Ciao" heard in Money Heist, an already familiar tune, had been aptly used as a form of protest and resistance. Not to mention that the growing presence of female characters in Money Heist allowed the show to insert gender-related issues and equal representation and encouraged conversations among the characters and with their followers.

Chelsea is a freelance writer. Her deep love for everything about literature stems from a childhood filled with Marvel comic books, worn-out novels, and pop-punk songs. She has always wanted to be an astronaut, but later on realized that writing is really her passion. There are better stories to tell here on Earth, after all.