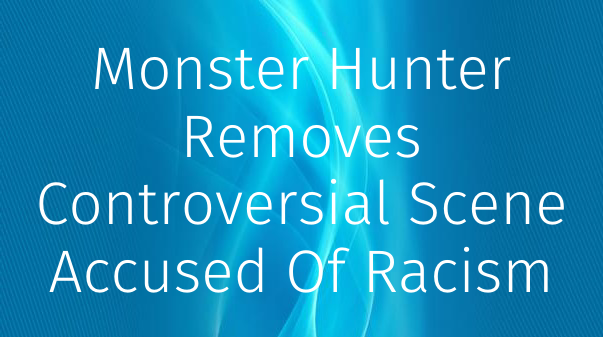 A controversial joke was removed from Paul W.S. Anderson's Monster Hunter movie after a huge backlash from Chinese audiences and on social media. The film is an adaptation of the wildly popular Capcom video game series of the same name. The film's story features an elite United States military force that accidentally enters a wormhole, and is sent into a world inhabited by all the creatures Monster Hunter fans have become familiar with over the years. It was released in China on December 3, 2020, and is set to release in the United States on Christmas day.

Soon after the film's release, it was marred in controversy after a joke that had racist implications. The focal point from the controversy comes from a punchline delivered by Jin Au-Yeung's character, in which he points to his knees and says "Chi-knees!" Many perceived the joke as a reference to the racist rhyming chant "Chinese, Japanese, dirty knees." Monster Hunter was hit by a huge backlash in China over the joke, resulting in the film being pulled from Chinese theaters merely a day after it's release.

Now, Deadline is reporting that the joke has officially been removed from the film. One of the production companies involved with the film, a German company called Constantin Film, issued an apology and announced that they removed the offending line. However, it is unknown if the film will return to Chinese cinemas. Tencent, another production company working on Monster Hunter and handling its Chinese distribution, is currently negotiating with the country's government about the film returning to theaters. Check out Constantin Film's statement below:

There was absolutely no intent to discriminate, insult or otherwise offend anyone of Chinese heritage. Constantin Film has listened to the concerns expressed by Chinese audiences and removed the line that has led to this inadvertent misunderstanding.

The backlash and subsequent removal of the film will surely damage the box office take of Monster Hunter. China is already the second-largest theater market in the entire world (only behind the United States), and the team behind Monster Hunter was specifically planning on the film being a hit in China. A China-specific trailer was made for Monster Hunter, and given that China has generally been more receptive toward video game films compared to the U.S., performing well there will play a significant role in the money the film will bring in.

The film has gotten hit hard on social media and by many Chinese people. It is yet to be seen if it could even make a recovery if it were to be re-released in China. The fact that the joke made it into the final cut itself is a bit surprising. Hopefully, the team behind the film had no malintent but, regardless, the joke's racist origin is fairly overt. Cutting it was unquestionably the right call to make—but the damage may already be done. For now, it remains to be seen if Monster Hunter will play in China again.

Xavier Ilyas is a New York based writer and filmmaker. He received a BA in Film Production from CUNY's Brooklyn College. He's spent more hours watching television and film than he has interacting with real human beings.