Movie's Most Notorious Villains: 5 That Had a Point (& 5 That Were Just Plain Bad) 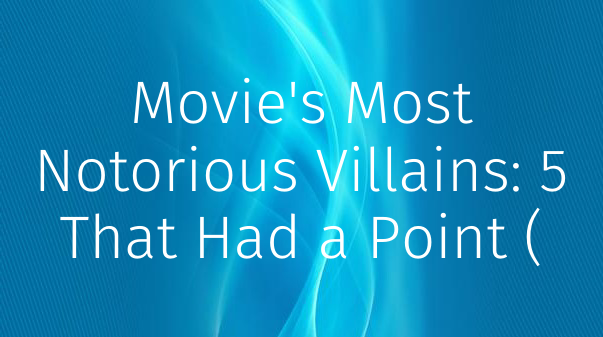 Movie's Most Notorious Villains: 5 That Had a Point (& 5 That Were Just Plain Bad)

When it comes to villainy, it's not always black and white, sometimes it depends on how you look at it to determine who the real villain is. Some villains have understandable motives either from years of abuse or neglect, and sometimes all their plans lack is empathy.

Some villains just cant be saved, they were just born to be terrible people. Sometimes they just want to cause destruction for the sake of causing destruction, causing great turmoil for our heroes. Let's look at some movie villains that might've had a point and some that are just plain evil.

As the big bad in Dark Knight Rises, Bane did something that no villain has ever done, break the bat. He was a brute force to be reckoned with, literally blowing up Gotham's mayor and threatening to take down half the city.

If we look beyond his violent tendencies and actually sit down to look at Bane's plan it's actually not that diabolic. He wanted similar things as Batman, to rid the city of corrupt politicians and give the power to citizens. With a few tweaks and less casualties, it could've been a solid plan.

When it comes to pure evil, there aren't a lot of villains that can top Darth Vader. As the main villain in the original Star Wars trilogy, Darth had a complex and painful fall from grace as we saw in the prequels.

He was a promising young Jedi, destined to bring balance to the force and instead he led a galaxy wide extermination of the Jedi and killed several thousands in his quest to be the most powerful being in the galaxy.

Before you accuse us of promoting genocide, hear us out. Thanos had the wrong the right idea with what he wanted to do but lacked empathy and reason when it came to how he was going to save the world from famine.

His plan wasn't to rule the world or to eat the planet, it was to save the world from overusing their resources and to help the future generations. Even Cap himself admitted he could find a bright side to the Post-Thanos snap.

Most villains have a plan or a way of making us empathize with them but the T-1000 is not one of those villains. His only goal was to doom humans and brutally kill a teenage John Connor.

He didn't care who got in the way or who he had to kill to get to John, he was brutally vicious. Thankfully we had our own Terminator on our side, otherwise we would've been doomed.

6 Had A Point: Magneto - X-Men Series

Magneto is one of those villains we can't help feel bad for. As a young kid, he was sent to a concentration camp and was made to witness some of the worst and most traumatizing moments of his life.It didn't help that he was shun ever more when the world discovered he was a mutant.

Now he works to protect his fellow mutants who are oppressed due to their abilities, and although his methods are extreme, we can't help but feel for him and understand his reasoning.

As one of the most memorable villains ever, The Joker became an instant hit as the villain in Dark Knight. He was truly as psychotic and as unstable as the Joker from the comic, an agent of chaos to Batman's quest for justice.

He didn't have any clear motivations for being the way he was, he had a mysterious and unreliable past and no one he was doing it for.

Terrence Fletcher was a terrible person through and through. He was verbally and physically abusive to his students, he demanded perfection and nothing less, putting unrealistic pressure on young minds.

Justifying his methods is hard but when it came to results, there was no one better. He had the old "hate me now, love me later" approach and his methods paid off in the end.

Sauron was a highly looming figure in Lord of the Rings, appearing to Frodo at the worst times and terrorizing him overall.

He had no clear motivation to do what he did, he simply wanted to be the ruler of the realm, being a tyrant for all to see.

Megamind started off as a villain and throughout the movie moved into an anti-hero role, proving he had a goof heart.

Like Magneto, Megamind had a hard life growing up and had traumatizing events that shaped his perspective on life.

Lord Voldemort had only one goal when he discovered he was a wizard, was to be the greatest wizard alive. He did everything he could to become the best, at first starting off with excelling in school and graduating to murdering and building an army of like-minded evil wizards.

He didn't care about who he had to kill to get to immortality, and he did a lot of unspeakable things that people woudn't even dare say his name.