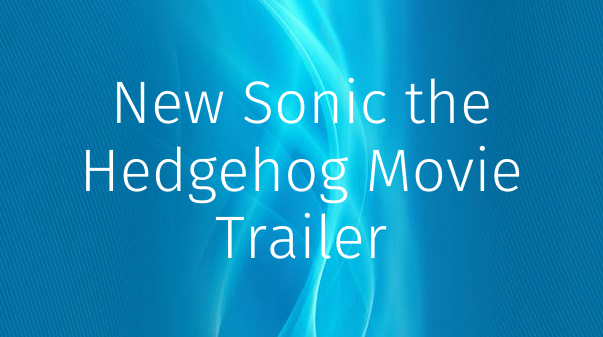 Sonic the Hedgehog gets his awaited redesign in the new trailer for the live-action/CGI video game film. Paramount released the official trailer for its Sonic the Hedgehog movie back in late April and the general response was, to put it simply, not great, Bob. Many people were baffled by the sneak peek's use of Coolio's iconic rap song, "Gangsta's Paradise", and were equally off-put by its comedy involving James Marsden as Tom, a sheriff who encounters Sonic in the real-world. However, Sonic himelf prompted the biggest outcry of all, due to his eerily "realistic" appearance.

In response, Paramount and Sonic the Hedgehog director Jeff Fowler announced they would be redesigning Sonic for the movie, and later delayed the film by three months in order to give their animators sufficient time to re-work his appearance. Various photos allegedly revealing Sonic's new CGI look have leaked online since then, but there's been nothing official to report for the last six months. Now, just a few days after Sonic the Hedgehog was originally supposed to hit theaters, his redesign has been formally unveiled.

A new trailer for Sonic the Hedgehog dropped online this morning, revealing the character's redesign in the movie. You can check it out below, followed by the updated poster.

Naturally, this brand-new trailer is primarily devoted to showcasing Sonic's redesign, above all else. His appearance in the film hews much closer to his classic video game look now, complete with cartoonish white gloved hands and equally unrealistic hedgehog features. The rest of the trailer is likewise an improvement on its predecessor. For starters, its use of "Blitzkrieg Bop" is a much better fit for its silly action-comedy tone than "Gansta's Paradise" was, and its emphasis on Sonic's super-speed as a source of humor makes more sense than the original trailer's focus on his banter with Tom. Meanwhile, Jim Carrey continues to channel his '90s-era self with his comical mugging as the villainous Dr. Robotnik, even before he gains his trademark giant mustache. This time around, however, the actor's performance feels more in keeping with the rest of the Sonic the Hedgehog footage.

As ridiculous as Sonic the Hedgehog continues to look, the marketing seems to have a firmer grasp on the film's tone now. Sonic's redesign certainly makes a difference, though, and his toothy smile alone is a notable step up from the first trailer. The movie as a whole is similarly starting to feel like it has more in common with this year's live-action/CGI Detective Pikachu than the infamous live-action Super Mario Bros., which is also encouraging. It might not break the video game movie "curse", but at least Sonic the Hedgehog shouldn't give its young target demographic nightmares when they watch it.