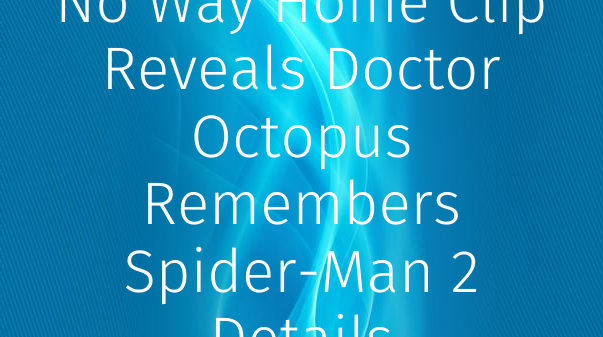 Molina plays Dr. Otto Octavius, a.k.a. Doc Ock, a brilliant scientist-turned-supervillain who initially appeared in Sam Raimi's Spider-Man 2 with Tobey Maguire. In that film, Molina's Doc Ock has created the tentacled arms as a means to handling dangerous material, which he uses to make a fusion reactor machine. The experiment goes horribly wrong during a public demonstration, killing Doc Ock's wife and fusing the AI-controlled tentacles to his body. In an attempt to complete his experiment, Doc Ock becomes a villain, doing whatever he can in order to see his work through. By the end of Spider-Man 2, Doc Ock is convinced to do the right thing and stop his experiment before it destroys millions of lives, sacrificing himself in the process.

In a new extended clip from Spider-Man: No Way Home (via CBR), Molina's Doc Ock is back and very much alive, and still on the same mission as he was in Spider-Man 2. Taking place on a busy bridge, Doc Ock confronts Holland's Spider-Man, asking him, "What have you done with my machine?" which is a direct reference to his fusion reactor from Spider-Man 2. Holland's Spider-Man is confused, as he obviously has no idea about the events that transpired in that multiverse, and the battle ensues, wrecking vehicular carnage at every turn, with Spider-Man dodging cars, while attempting to save lives. Take a look at the clip below:

Molina is a seasoned actor who has appeared in a multitude of films throughout his career. One of his most memorable first appearances was in the opening of Raiders of the Lost Ark as a guide who betrays Indiana Jones. From there, Molina has had a prolific run, popping up in a number of memorable roles, including Paul Thomas Anderson's Boogie Nights, The DaVinci Code, Show Me A Hero, Angie Tribeca, etc. He's also done a significant amount of voice work, voicing characters in everything from Rick and Morty to Solar Opposites to Family Guy to Frozen II and beyond.

How the returning villains will interact in the Marvel 616 universe will be a unique revelation for Spider-Man: No Way Home. With the characters bringing their goals and sensibilities from their prior film iterations to the new one, it will be interesting to see how they assimilate to life fighting in a new universe against a new Spider-Man. What it all means for the future of the MCU is up in the air, but the possibilities seem endless in terms of how these villains could continue to be explored with their "new life" inside the multiverse. The answers will be revealed when Spider-Man: No Way Homeswings into theaters on December 17.

Paul Shirey is a senior news writer for Screen Rant. Formerly the Editor-in-Chief of JoBlo.com, he has over a decade of writing and reporting about the entertainment industry and has covered everything from Comic Con to CinemaCon to Star Wars Celebration, as well as covering numerous set visits and junkets all over the world. He is passionate about film, comics, TV and spends way too much on collectibles. A proud father, a combat veteran, dog lover, gym rat, coffee enthusiast and all around equal opportunity doughnut devourer, you can follow his daily exploits on Twitter and Instagram, as well as YouTube Videos on The Arctic Ninja Network.