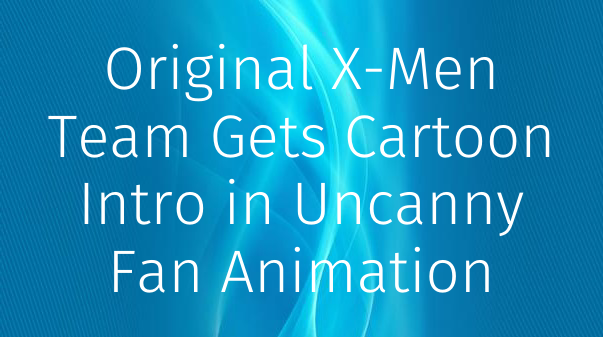 Since their first introduction to Marvel Comics, the X-Men have captivated fans with their amazing tales of mutant heroism, and the original team is at it again with an all-new uncanny fan animation. While the X-Men’s popularity grew exponentially with the 1975 release of Giant-Size X-Men #1 by introducing fans to a whole new mutant lineup, the original team still holds a place in fans’ hearts as they were the ones who introduced the world to the now-iconic superhero squad. The fan animation pays perfect tribute to the first X-Men by epically showing off each of their astonishing powers.

X-Men #1 was released in September of 1963 by Stan Lee and Jack Kirby, introducing fans to the first ever team of mutants. The original X-Men consisted of Cyclops, Jean Grey, Beast, Iceman, and Angel. Their first mission was battling the villainous Magneto as he and his Brotherhood of Evil Mutants hijacked military rockets and planned to unleash them on humanity. The X-Men showed off their evil-fighting skills through the use of their unbelievable powers and proved to be an exciting addition to the Marvel universe.

In a Reddit post by user susan201299, with Samuel Deats credited as the animator, the former glory of the original five X-Men are put on full display in a cartoon fan animation showing off their unique power sets. The clip shows Cyclops blasting his optic beams as Angel soars in the skies behind him, followed by a not-yet-blue Beast jumping into action with Iceman sliding across an ice bridge and Jean Grey finishing off the sequence with a telepathic blast right at the viewer.

While this animation gives fans an epic look back at the X-Men’s humble yet spectacular beginnings, the team has come a long way since then. Beginning with just five mutants fighting off the evil forces of other mutants, the X-Men have graduated into an entire nation. No more are mutants fighting each other as former heroes and villains alike are ruling the island nation of Krakoa together, making diplomatic decisions to work out their differences. Now, the X-Men are about to enter a whole new era, one that will reshape their destiny within the Marvel Universe forever.

The X-Men truly have come a long way since their first introduction, but this uncanny fan animation brings back the excitement of the original series by putting fans right into the action as the X-Men show off their abilities in epic fashion. The unique animated style would be awesome if used in an X-Men animated series, but for now, fans will just have to make do with the cartoon clip available as the original X-Men team gets a cartoon intro in uncanny fan animation that is unarguably just as astonishing as the X-Men themselves.