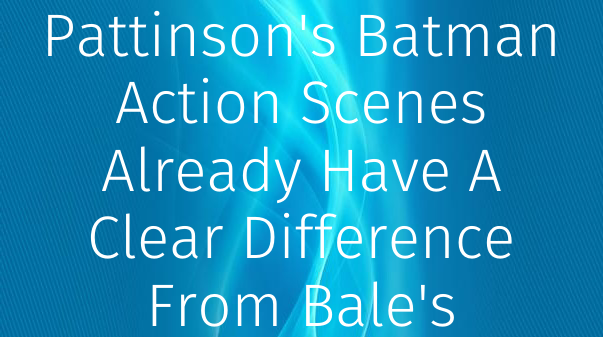 Robert Pattinson’s version of Batman in Matt Reeves’ The Batman is already distinguishing himself from Christian Bale’s version. Following plans for the fifth installment of WB’s original Batman film series falling through, the series was rebooted with Christopher Nolan’s Batman Begins, the first of a new trilogy that redefined that iconic superhero on film. Like Nolan’s Batman, the upcoming Matt Reeves version of the Dark Knight is taking a grounded and realistic approach to Batman, but trailers for The Batman indicate that Reeves will handle fight scenes quite differently from Christopher Nolan.

Christopher Nolan’s celebrated Dark Knight Trilogy envisioned a realistic take on the normally outlandish Batman characters and mythos. Batman Begins showed the gradual process of Bruce Wayne’s transformation into his Batman persona, exploring how he received his training, outfit, and equipment, as well as the psychological tactics he uses against his enemies. While Bruce Wayne was only a man, he used his skills and theatricality to become a supernatural figure in the eyes of Gotham City’s criminal element.

While The Batman has not yet been released, the film’s marketing shows a similar take on the character to Nolan’s, with a Batman who focuses mostly on his detective work and a Riddler who takes inspiration from real-life serial killers. One clear difference between the Pattinson version of Batman and Christian Bale’s is how their respective films depict their fight scenes. The Dark Knight Trilogy’s fight scenes were often depicted through quick cuts that focus far more on the people Batman was fighting than the Dark Knight himself. The Batman’s trailers, meanwhile, show fight scenes with few cuts and a strong focus on Batman.

The difference between the two films’ fight scenes speaks to their respective focus on Batman as a character. The Nolan films, especially Batman Begins, intended to make viewers see Batman the way that Gotham criminals do. Batman moved fast, hit hard, and disappeared as swiftly as he struck, leaving observers disoriented. What many critics of the Dark Knight Trilogy’s dizzying fight scenes seem to forget is that they’re meant to show Batman as an almost otherworldly being.

Matt Reeves’ The Batman, while taking a similarly grounded approach, is said to focus on Batman’s struggle with his rage as well as his detective work. This implies that the film won’t focus as much on Batman as a seemingly supernatural being, but rather a brilliant and vengeful vigilante and detective who brutalizes his opponents. The trailers include shots that linger on Batman repeatedly pummeling criminals or advancing through gunfire unimpeded due to his armored costume.

There have been numerous film adaptations of Batman, with each new interpretation focusing on a different aspect of the malleable source material. While Tim Burton and Joel Schumacher each put a heavier emphasis on the fantasy elements of Batman’s mythos, the Adam West TV show and Ben Affleck’s DCEU Batman were more concerned with replicating different eras of the comic books. Christopher Nolan and Matt Reeves both have visions of Batman that are more grounded in realism, yet the two are hardly the same, especially concerning what their films focused on. In fight scenes, Christian Bale’s Batman was depicted as an ethereal wraith-like being while The Batman emphasizes the rage and brutality of Robert Pattinson’s iteration.

David Miller is a staff writer for Screen Rant, indie comic writer, and life-long lover of all things Star Wars, Marvel, and DC. He was born and raised in New York and has a degree in English from Rider University. He relates to Peter Parker maybe a little too much.