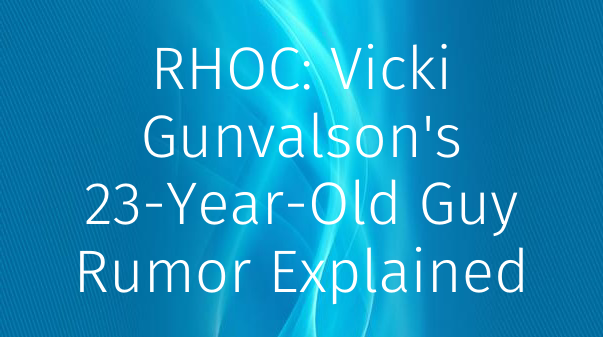 Vicki Gunvalson of The Real Housewives of Orange County fame is unhappy about rumors that link her with a 23-year-old mystery guy, and we're going to explain those rumors today. Fans were caught off guard by the accusations about the RHOC star. Vicki is currently engaged, and not to a 23-year-old. This is why Bravo viewers are so curious about the gossip.

The OG of the OC has been engaged to her partner Steve Lodge since April of 2019. Fans have become accustomed to his face, as the ex-police officer often made appearances on her last The Real Housewives of Orange County season. The couple was forced to postpone their nuptials due to the COVID-19 pandemic. They'd planned on tying the knot in April 2020. Vicki, who celebrated her 59th birthday in late March of this year, wants to celebrate her union with Steve in a traditional way, with their six children and grandchildren in attendance. So, she and Steve are waiting until it's safe to have a conventional wedding ceremony. While they have not revealed the new wedding date, the couple plan to grow old together, despite the rumors.

Recently, a @deuxmoi report alleged that the mother of two was “not engaged anymore.” The outlet reported that the reason was the fact that the blonde was allegedly “dating a 23-year-old dude.” Fans were immediately wary of the tall tale. However, they relaxed when Gunvalson commented on the post. She wrote, “Not true!!!” The clap back was caught by @commentsbybravo on Sunday. Check out the post below:

Fans are not quite sure where the rumors came from, although some had interesting insights and thoughts. Many remarked that the alleged claims came from an email with the name, Behind the Gates. This was the show's original name when it was first pitched to the Bravo network. This is because Coto de Caza, where Gunvalson resided, is a gated Orange County community. Vicki put her Coto de Caza home up for sale in March of this year. Other fans questioned the validity of the source.

Since choosing to delay her wedding day to Lodge, the insurance queen has brought a dream retirement villa in Puerta Vallarta, Mexico. The reality star decided to buy a nice apartment overlooking the sea in May of 2020. Lodge has been spotted in many of her social media photos, and their relationship seems to be solid. Fans of The Real Housewives of Orange County were happy to hear that the rumors were really false. However, they are still upset with Bravo for seemingly cutting ties with Gunvalson amid the all-star spin-off talks. While viewers were preparing themselves for the return of the “whoop it up” girl, the OG dropped a bomb, letting her followers know that Bravo dropped her from the Housewives spin-off.

Jennifer is an avid Reality TV follower and is fluent in all Real Housewives drama along with the ups and downs of the 90 Day Fiance sagas. When she is not writing she enjoys traveling the world in search of the best beaches! Jennifer has been writing for over 15 years and would like nothing more than to have a proper sit down with the women of RHONY to 'Make It Nice.'