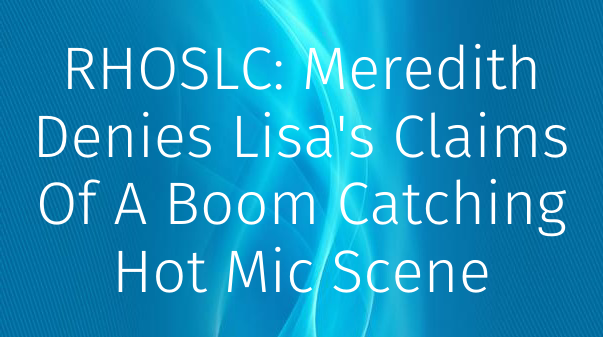 Meredith Marks is shutting down Lisa Barlow's claims that a boom mic caught her scathing tirade on The Real Housewives of Salt Lake City. Lisa seemingly attempted to redeem herself after her vicious hot mic moment where she unleashed the anger she felt against Meredith. Lisa initially tried claiming that she didn't know she was being recorded despite tossing her mic back to producers following the verbal lashing. On the other hand, Meredith is calling her bluff and wants Lisa to stop with all the "lies."

Lisa went off about Meredith behind her back in the latest episode of RHOSLC. After storming off from dinner due to Meredith's loyalty to Mary Cosby, Lisa ran to her room and blurted out all of her unfiltered thoughts on her friend. Specifically, Lisa accused Meredith of sleeping with "half of New York" among other things. Mics picked up everything and Lisa seemingly knew it.

So far, Real Housewives of Salt Lake City viewers haven't stopped talking about the explosive scene on social media. As expected, Lisa caught wind of one fan's theory. A screenshot reposted in a thread on Reddit showed Lisa's response to one fan who asked if Lisa thought her mic was off when she went on the rant. "It was off. They used a boom, I was quitting," Lisa claimed. But after Meredith caught wind of Lisa's claims, she quickly shut them down. "Oh please. Spare me the BS," she wrote in a since-deleted tweet. Meredith went on to explain that if a boom mic were present "we would have seen it outside the door, or the boom was in the room where she would have seen it."

On Instagram, Meredith shared a photo of a cameraman holding a boom mic and noted the pic was "for those of you who are not familiar with a boom." She doubled down on her claims that if a boom mic were present, it would have been visible in the shot or Lisa would have seen it herself inside of her room. Meredith added the hashtag "#stopthelies" to the post in a further nod to her ongoing feud with Lisa. The two were much closer on RHOSLC season 1. However, Lisa has taken issue with Meredith for allegedly not being as good a friend to her as she is to Meredith.

Viewers have been sharing mixed reactions to the friendship feud, with some fans accusing Lisa of being sneaky behind Meredith's back. Their fallout is just one of many storylines on The Real Housewives of Salt Lake City. Lisa went at it with Mary right before she stormed off ranting about Meredith. Mary also exchanged words with Jennie Nguyen and Heather Gay. The drama-filled dinner was also one for the Housewives history books and solidified this spinoff as one of the most popular despite only having two seasons.

90 Day Fiancé: Robert Reveals How His Son With Anny Was A Special Child