Sheriff Mod Vs. 100 Player Mod: Which Among Us Game Is Better & Why 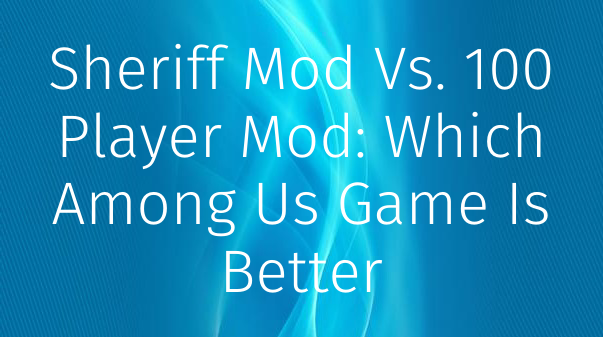 Sheriff Mod Vs. 100 Player Mod: Which Among Us Game Is Better & Why

There are countless mods to choose from when playing Among Us, and fans continue making more. While InnerSloth's hit social deduction game has a set list of rules, these mods can offer a fresh take on traditional gameplay. Perhaps because of this, mods for Among Us are increasingly popular. Two of the most popular mods are the Sheriff mod and the 100-Player mod, but which one is actually the most fun?

The Sheriff mod in Among Us allows one player to take on the role of Sherrif in each game. The Sheriff gets a Kill button, and must shoot the Impostor to win. Shooting the correct Impostor in Among Us can mean a quick win for crewmates. However, if the Sheriff shoots an innocent crewmate by mistake, then both players will die - which makes winning as an Impostor even easier. It's a high-risk, high-reward role, and it's a lot of fun.

Meanwhile, the 100-Player mod in Among Us is exactly what it sounds like. This mod allows up to 100 people in the same lobby and game at one time. It essentially turns the game into a battle royale-style free-for-all, which is why it's gotten so popular. Playing Among Us with up to 100 people can be a lot of fun as well, so is the Sheriff mod or 100-Player mod actually the best?

Is The Sheriff Mod Or 100-Player Mod The Best In Among Us?

Each mod comes with its own pros and cons. The Sheriff mod for Among Us is great, but games using it will always feel pretty similar. The 100-Player Among Us mod has so many people that the games are always changing. Sometimes, a great group can make playing Among Us with 100 people feel really fun, but oftentimes it just feels chaotic and confusing. It can also be stressful trying to actually get the lobby up to 100 people, depending on the time of day, and players are constantly dropping out early.

Maps in Among Us also weren't meant for such a high volume of players, which means gameplay can be crowded and a bit jumpy. Ultimately, this is why Among Us' Sheriff mod is the better of the two. While both mods are fun, the Sheriff mod is more reliable in terms of gameplay and comes with fewer frustrations. Until bigger maps meant for larger groups of players come to Among Us, the 100-Player mod just doesn't function as well as it should - although, it might work better in the upcoming Airship map, so fans will have to wait and see.

Based on the current state of the game, as well as how each of the mods function, the Sheriff mod is definitely better than the 100-Player mod right now. More mods are being added to Among Us all the time, though, so better versions of these mods - or completely new ones that are even more fun - may come out eventually.

Austin King is a Game Features Editor at Screen Rant. He's the author of several books and hosts the Dragon Quest FM and JRPGs & Me podcasts. You can find him on Twitter @DragonQuaustin.