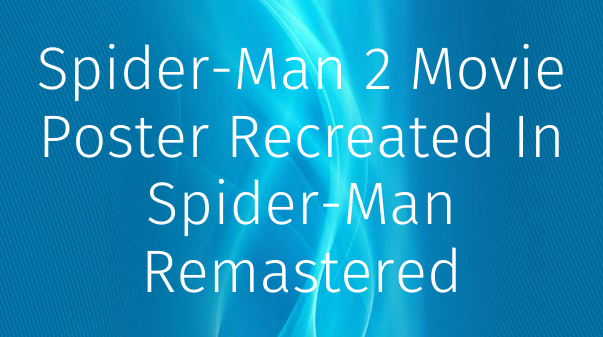 The movie poster for Spider-Man 2 has been recreated in the video game Spider-Man Remastered. Released in 2004, the Spider Man 2 movie featured Tobey Maguire's Spider-Man fighting Doctor Octopus. One of the posters for the movie shows Spider-Man over the New York city skyline in midair with two of Doc Ock's mechanical tentacles surrounding him.

Spider-Man Remastered was met with both praise and drama. The remastered version of the 2018 video game Marvel’s Spider Man debuted with not only improvements to the frame rate and graphics, but also with a new face for Peter Parker. Despite the controversy surrounding the face change, the remastered game remains popular, as does its original incarnation. As Spider-Man, the player swings through New York city and fights crime. One of the main villains the player encounters in the game is mentor-turned-foe Doc Ock.

The most hardest recreation poster I've ever done! I put double the effort to get the most accurate position and color tone everything to like much original as possible!

RockRider's movie poster isn't the only piece of in-game edited fan art. When news of the face change for Spider-Man Remastered was rocking the internet, digital artists were combing faces to make a new look for Spider-Man. In fact, one talented digital artist combined the original face in Marvel’s Spider Man with the face used in Spider-Man Remastered to make a Spidey that resembled Chris Evans. Regardless, RockRider's Spider-Man 2 movie poster has gotten the attention of Insomniac Games, the developer of the game. Insomniac Games' Twitter account retweeted RockRider's post and commented with, "Wow, another awesome poster recreation from Rock!"

As revealed during the PlayStation Showcase, Insomniac's sequel to the remastered version, Marvel's Spider-Man 2, is currently in development. Slated to be released in 2023, this new game will feature both Miles Morales and Peter Parker tag-teaming Kraven and Venom. With the excitement over this new game and its impressive graphics, fans of the Spider-Man franchise can expect digital fan art similar to RockRider's fan art from Spider-Man Remastered.

Caitlin Dinunzio is a writer for Screen Rant, focusing mainly on gaming news. Though she does enjoy AAA games, she's more inclined to pick up a game that's a little more niche. She runs on coffee, and in her spare time, she enjoys reading with her 107-pound dog Nike by her side.