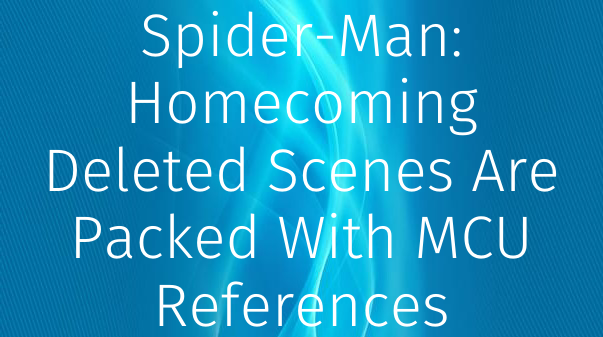 Newly-released deleted scenes from Spider-Man: Homecoming provide plenty of Easter eggs and references to the larger Marvel Cinematic Universe, along with even more comedy. With Spider-Man: Homecoming now the biggest superhero film of 2017, anticipation is high for the release of the movie on home video. With just a few weeks to go, Sony and Marvel have been providing fans with several extras to get them excited. Yesterday, the first 10 minutes of the movie were put online, and plenty of features have followed.

Along with the opening of the film, yesterday saw the release of a new video featuring Kevin Smith discussing what makes Homecoming so special. Today, that was followed up by a clip of Stan Lee exploring the origin of the Vulture and his translation to the big screen. Now, a number of deleted scenes have arrived online to show fans what could have been.

The first clip, shared by CINEMAND comes as Peter and Ned make their way to Washington, DC. Along the way, they pass by the rebuilding of the Triskelion. While not essential to the film, the short clip does offer some connections to the past of the MCU. As Michelle explains, repairs are still being made and Damage Control are stilling hauling things off. Along with that deleted scene, a more humorous one has arrived, featuring Betty and Jason delivering the news.

Clearly homaging Tim and Eric, this cut scene features plenty of gags and callbacks to the actual film. We see the return of Principal Morita, among other supporting characters, and learn that Tiny McKeever ended up with Shocker's gauntlet. While his roots as a bully in the comics were altered for the film, here's hoping Peter never gets on his bad side.

The video also contains a number of references to the larger MCU mythology, with a Sokovia benefit lunch planned and a rival basketball team named the Flatbush Asgardians. Thor's people are especially popular on Earth in the MCU, as an Easter egg in Homecoming reveals that an entire religion has popped up around the race.

With Spider-Man: Homecoming releasing soon on Blu-ray and DVD, expect plenty more bonus features to arrive online in the near future, too.